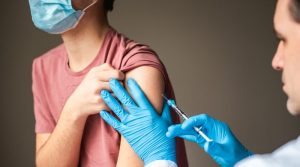 A young Queensland teacher who suffered a severe adverse reaction to her first Covid shot says her life has “essentially been ruined” after the state’s vaccine mandate left her unable to work unless she took her second dose.

Bek Bickerton, 27, received her first Pfizer vaccine in October and immediately began experiencing side effects, including changes to her menstrual cycle and fatigue, which continued to worsen.

By November she was hospitalised for a week with dizziness, blurred vision, tingling down her arms, extreme fatigue, low blood pressure and what was later diagnosed as postural orthostatic tachycardia syndrome (POTS).

“My heart would accelerate to extreme levels when I stood up,” she said.

“A brain MRI showed multiple lesions and inflammation. I also had trouble regulating blood pressure and heat. I had a wide range of symptoms but the worst ones were severe brain fog and fatigue.”

She was sent home with a diagnosis of POTS and “spent the next two months in bed”, unable to look after her two young children.

“It was over the school holidays so it didn’t affect my work too much, but I opted not to get the second vaccine so as a result I haven’t been able to go back to work,” she said.

Ms Bickerton was among more than 1200 Queensland teachers and school staff affected by the mandate, which ends this week.

Under the rule announced last November, “high-risk” workers were required to have their first dose by December 17 and be double-dosed – formerly referred to as “fully vaccinated” – by January 23.

Ms Bickerton said despite her suspected reaction, multiple GPs and specialists including two neurologists refused to write her an exemption.

“None of them would link my symptoms to the vaccine,” she said.

“The first neurologist said he agreed the timing was suspicious but recommended the second shot. The second, I sent through some research articles from the US – he refused to read them and said I absolutely should get the shot.”

Ms Bickerton said she “didn’t expect to be believed or listened to” by doctors. “I knew as soon as I brought it up it would be written off, they would never entertain the thought that it could be linked to the vaccine,” she said.

“I guess I felt they were putting me in the anti-vax territory.”

She even hesitated telling her friends she thought her symptoms were linked to the vaccine because “I knew they would disagree”.

Ms Bickerton eventually found a Gold Coast-based GP who specialises in POTS who agreed the vaccine likely caused her illness.

“He’s treating many other patients who have had these symptoms come on,” she said.

The doctor was willing to write her a three-month exemption, which has since run out.

“During that time there was still no school that would hire me unless it was for relief work,” she said.

“My life has essentially been ruined as we’re now on a single income, I spend days at a time in bed trying to care for two preschool-aged children and we now can’t afford the mortgage to upgrade our home as we’d planned.”

She added that the Therapeutic Goods Administration “never got back to me after I reported my side effects and no specialist has linked the vaccine to my symptoms so I have no access to compensation, or even acknowledgment that I was forced to suffer this debilitating illness”.

“It’s all been a lose-lose situation,” she said.

It comes after an Australian scientist also suffering ongoing “long vax” symptoms hit out at the medicines regulator and government for failing to thoroughly investigate or acknowledge neurological reactions.

“I’ve done 50 rounds with the TGA on this,” Dr Rado Faletic told news.com.au.

“They’ve said, ‘We can find no safety signals,’ which I think is disingenuous if not outright lying. In my small personal circle I know over a dozen people with different long vax problems, [ranging from] ongoing headaches, memory problems or brain fog to some people who were basically bedridden for months.”