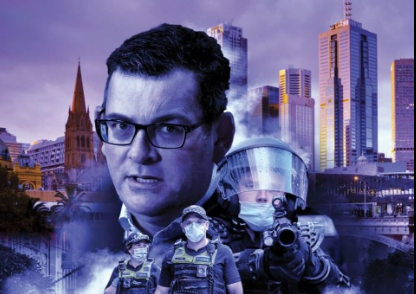 Make no mistake, Daniel Andrews is desperate for us all to forget. We must not let that happen.

Ask yourself WHY charges are being withdrawn, apologies are being issued, and compensation being paid? (as touched on in this blog post)

Consider that Dan has been notably absent from the cameras compared to 2020 and ’21, and he’s even refused (so far) to mandate the reintroduction of masks despite the ‘health advice’ saying he should…

Why the change of heart?

My guess? Internal polling says he’s in trouble, and the less attention he draws to himself, the better.

If polling said that he was in a strong position, that everyone loved The Little Dictator in a North Face jacket, and that another lockdown would help him win the election, you can bet your bottom dollar he would do it.

If polling said that he was in trouble and needed to win back some of the people he’d put offside through his draconian actions and elephant-sized-ego… well then you’d see the things we’re seeing.

I think DA’s actions right now are the strongest indication yet that he’s in trouble at this election and he knows it. He’s desperate for us to forget.

We will not let that happen.

How will we make sure that all Victorians remember?

Well in my opinion the best way is to get as many people as possible to watch Battleground Melbourne. It’s free to watch here: www.battlegroundmelbourne.com

In addition to that, it’s about the personal conversations we can have with people, having BBQs or play dates for the kids, and actually being brave enough to TALK about it, even with people whose views you’re not sure of, or even people who supported DA early on!

There’s a LOT of people who bought the fear campaign while they were in the thick of it, but now that the worst is over there’s a slowly-dawning realisation that we ‘Went a bit too far’. That’s a massive understatement of course, but there’s more people than you might think who are ready and willing to accept that as truth, even though they bought all the nonsense last year.

Consider when Jeff Kennett lost the Victorian State election in 1999… the parallels with this election are significant in my opinion.

Kennett was a two-term premier who had made tough choices that were polarising but mostly popular, and he was widely expected to win a third term with ease…

The Victorian Liberal Party suffered a 13 seat swing and lost power by a WIDE margin, ushering in what has since been an era of total Labor Party domination.

Daniel Andrews is a two-term premier who has made tough choices that were polarising but mostly popular, and he is widely expected to win a third term with ease… or at least that’s what the media are telling us…

But I think the Labor Party internal polling is telling him something different.

Perhaps some things (like the Avi apology and dropping the Incitement charges against Monica) might be initiated by VicPol… maybe… although even that would represent a significant shift on their part away from just doing DA’s bidding… but the choice not to lock down? Not to mandate masks? To actually cop the backlash from his own sycophants who begged him to ‘Dictate me harder daddy Dan!’

How do you explain that?

Why would he risk upsetting his base? Actually that’s easy, his base are never going to leave him no matter what, so he can take them for granted.

The REAL question is… why does he feel the need to appeal to anyone OTHER than his base?

According to him, he is wildly popular and he has the full support of most of the Victorian people… but his actions are speaking louder than his words in 2022, and all I can think is that he knows something that the media aren’t telling the rest of us.

He wants the people of Victoria to forget.

It’s up to us to make sure he doesn’t get his way.

One thought on “Remember Remember on the 26th of November”