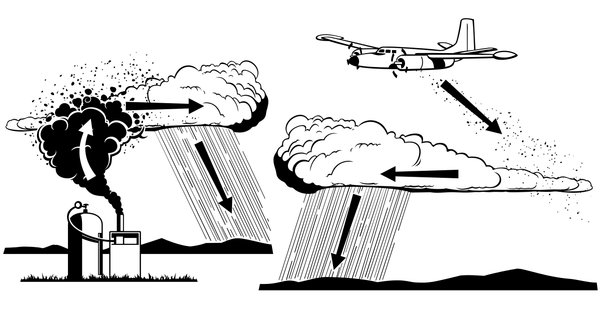 Cloud seeding is a method of artificially generating additional rainfall from clouds through technology. It may involve attempting to produce rain when none would normally fall or it may be working to increase precipitation over a particular area.

For over five decades in Australia, the study of clouds, rain and the atmosphere has been largely hidden from the public, as a secretive network of private business interests and faceless corporate entities continue to manipulate the weather around us to their benefit.

Experiments of the cloud seeding theory began in Australia shortly following the world’s first laboratory trials, after new research papers published by USA researchers I Langmuir and V Schaefer stated that rain could be induced by seeding clouds with dry ice.

After a series of experiments in New York, the two researchers managed to make it rain using silver iodide bullets. They got a patent for their technique, referred to as cloud-seeding, soon after.

As a result of the international study, cloud seeding was first trialed in Australia in 1947 when the CSIRO used Royal Australian Air Force aircrafts to drop dry ice into the tops of cumulus clouds.

According to CSIRO history, the method worked reliably with clouds that were very cold, producing rain that would not have otherwise fallen, leading to more subsequent trials.

The first documented date of this success was in 1947. Described by CSIRO:

“This is believed to be the first documented case anywhere in the world of an appreciable man-made rainfall reaching the ground and the first time that dynamic cloud growth had followed seeding.”

Following the success of initial trials, CSIRO scientists would continue this work until 1952, soon expanding to include theoretical, laboratory and airborne investigations of cloud structure and reaction.

CSIRO carried out similar trials from 1953 to 1956 in South Australia, Queensland and other states, however this time covering a large area instead of singular clouds as before.

Experiments used both ground-based and airborne silver iodide generators to gain results. Each experiment covered a target area of 2,000 to 8,000 square kilometres and a neighbouring control area of the same size which was not seeded.

During the late 1950s and early 1960s, CSIRO performed cloud seeding in the Snowy Mountains, on the York Peninsular in South Australia, in the New England district of New South Wales, and in the Warragamba catchment area west of Sydney.

CSIRO’s activities in Tasmania in the 1960s were also successful, with seeding over the Hydro Electricity Commission catchment area on the Central Plateau achieved documented rainfall increases as high as 30% in autumn.

The Tasmanian experiments were so successful that the Commission has regularly undertaken seeding ever since in mountainous parts of the state.

Furthermore, striking results documented across Australia held such promise at the time that new systematic programs of cloud seeding were set up as a result for the next fifty-years.

This work is done today by the CSIRO Division of Cloud Physics under the ‘Marine and Atmospheric Research’ division.

Cloud seeding continues across Australia in 2018 – and is more advanced than ever.

Today, while some government-run projects exist, the most popular type of project involves coordination between the government and a private company.

A key example of a modern operation currently bringing these experiments to the modern era – one of two of the largest in Australia – is weather and water experimental company, Snowy Hydro, based out of the Snowy Mountains in NSW.

Following initial trials in 2004 in the region, Snowy found that the “exceptional scientific merit of the trial”, “positive results of the evaluation”, and “absence of adverse environmental impacts” were sufficiently ‘compelling’ for the government to pass legislation for an ongoing, operational cloud seeding program.

James Pirozzi, manager at Snowy Hydro, explained how their technology works and has developed in the 21stcentury:

“We’ve got a series of ground-based generators on the western side of the Great Dividing Range in the Kosciusko National Park, and we use the natural terrain features in the wind to give us uplift to get that material from the ground up into the clouds,” Mr Pirozzi said.

Those generators, the burners themselves [are] essentially a big propane flame.”

The cloud seeding activities undertaken by Snowy Hydro are authorised by the Snowy Mountains Cloud Seeding Act 2004 (Act), which prescribes a number of mandatory requirements for cloud seeding programs in NSW.

A 2009 paper looking into cloud seeding found “overall rainfall over targets was somewhere between 5 per cent and 13 per cent greater than over a nearby control region”.

In 2016, Hydro Tasmania conducted cloud seeding in the lead-up to deadly flooding in north-western Tasmania that resulted in a coronial inquest.

It was later found in a DPAC review that the seeding from Hydro “had no measurable impact on precipitation” — despite the flight lasting for an hour and 34 minutes over the Upper Derwent catchment, targeting Lake Echo.

The review found the cloud seeding flight did not contribute to subsequent flooding of 2016.

Hydro Tasmania’s cloud seeding operation has been on hold since the incident.

In December 2006, the Queensland government announced $7.6 million in funding for “warm cloud” seeding research to be conducted jointly by the Australian Bureau of Meteorology and the United States National Center for Atmospheric Research.

These are only a few examples!

Current Prime Minister Malcolm Turnbull announced in 2007 that $10 million from the Australian Government Water Fund will be given to the investigation of an ‘untried technology’ that aims to trigger rainfall from the atmosphere, even when there are no clouds.

In a sense, the company will be taking methods previously discussed above, and adding electrification of the ionosphere to create clouds out of thin air, even when there is no rain.

Mr. Turnbull’s office says there was no breach of caretaker protocol because the project was actually approved before the election was announced.

It has been revealed that Mr. Handbury is the wealthy nephew of Rupert Murdoch and chairman and proprietor of Murdoch Books, which is the headquarters for Australian Rain Corporation!

All starting to make sense now?

Malcolm Turnbull was asked the following question in relation to the connection by the ABC in  2007: Has Matt Handbury’s contribution to your fundraising Wentworth Forum helped in securing funding for the Australian Rain Corporation?

“There is absolutely no connection,” he said. “That is an outrageous suggestion”.

Guidelines for the utilisation of cloud seeding as a tool for water management in Australia: cmar.csiro.au

Cloud seeding stimulates rainfall, but what is it and how does it work?: abc.net.au