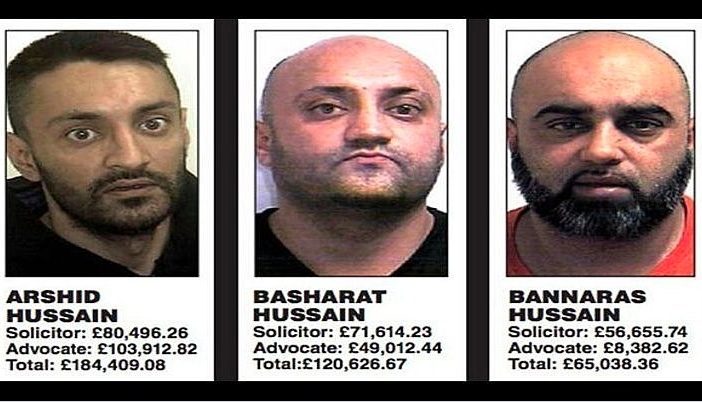 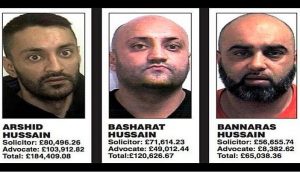 Three brothers have received up to £500,000 in legal aid after raping children in Rotherham – while dozens of their victims have yet to receive any compensation.

Arshid, Basharat and Bannaras Hussain – known as Mad Ash, Bash and Bono – pleaded poverty despite running a petrol station, takeaways and an egg farm that supplies supermarkets, alongside owning a number of properties.
And were awarded £370,000 in legal aid for their costs in the 2016 crown court trial. This does not include other magistrates hearings and family court battles which experts say could tot up to £100,000 more.
Survivors have called the payout “outrageous” and “immoral”.
Sammy Woodhouse, 34, one of their 50 victims, said: “This is completely outrageous and immoral.”
“Something needs to be put in place to stop these people just laughing at the system and milking the taxpayer dry.”
Former youth worker Jayne Senior MBE, who helped expose the scandal, said: “I’m totally shocked and horrified.This is terrible.”
“These rapists and abusers are pure evil but they’ve had almost half a million pounds spent on them, yet these poor girls get nothing.
“It feels like the judicial system is not set up to protect victims of some of the most horrendous crimes of abuse, torture and trafficking this country has ever seen.”
Sammy added: “Perhaps if they had been forced to pay for their own defence it might have made them question even taking it to trial.
She said the Hussain family had “loads of businesses”. “Surely they could have afforded their own lawyers?” she added. “But I guess they probably put everything in other people’s names. It’s a disgrace.”
Sammy also slammed “public servants at the police and council” who “failed” to do their jobs.
She said: “Because they didn’t do what they were paid to do and ignored what was going on they have now landed the public with paying all these legal fees for these men. It’s completely outrageous.
“The only people laughing in all this are the lawyers.”
Jayne Senior agreed, adding: “If we’d have listened to these girls all those years ago, the court cases would not have cost this much. All the evidence was there decades ago. They have also had to relive the abuse time and again because of the brothers’ not-guilty pleas.
“You can be the biggest criminal in the world and still get legal aid while these girls are fighting to get compensation.
Solicitor David Greenwood revealed that of the 86 victims he represents, 70 have not yet received any compensation payout. Dozens of others have received sums as low as £2,000.
“Everyone is entitled to representation but the way in which they conducted their defence – and I blame the perpetrators – was an insult to the girls. There was so much evidence it was overwhelming and I fail to understand how they could get away with it.”
“They wasted a lot of money trying to defend themselves.”
Some girls were just 11 years old when they were raped, tied up and tortured and passed between abusers.
Ringleader Arshid, 42, was jailed for 35 years, Basharat 25 years, and Bannaras was given 19 years.
Source: https://voiceofeurope.com/2019/07/rotherham-uk-muslim-child-rapists-get-half-a-million-pounds-in-legal-aid-victims-get-nothing/