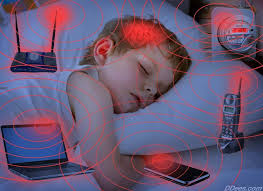 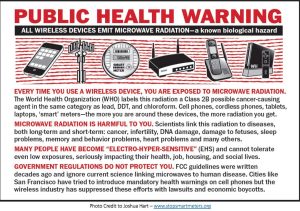 They” are alerting people to the fact that birth defects are about to rise, but this is due to radiation exposure, and especially the excessive radiation heat caused by the intensification of 4G and 5G cell towers, which are now ubiquitous in our world.

With all the talk about so-called “climate change,” and the extremely high temperatures we are experiencing this summer (see here, here, here, and here), shouldn’t we at least be considering the possibility that RADIATION HEAT is causing this extreme heating and is also responsible for killing millions of innocent life forms (see here, here, and here). The military has known for decades that microwaves cause extreme heating. That is why microwaves are used for cooking and in fact, microwave ovens were once called “radar ranges” because the frequencies were known to cook things.

Millimeter waves (similar to the ones being used for 5G), also cause extreme heating, and this is why millimeter waves are being used as weapons. They can induce extreme burning sensations on the skin that make one feel like their “body is on fire.”

Not surprisingly, 5G phones are overheating due to excessive radiation heat, so for those people who are foolish enough to purchase one of these lethal devices, you can kiss that $1300 you paid for the phone goodbye. 5G is also heating up cell phone base stations which, with any luck, will spontaneously combust in the not-too-distant future.

FRIENDS — WE ARE BEING COOKED ALIVE! Literally. The 2.4 GHz frequency being used in cell phones, cordless phones, wifi routers, baby monitors, smart meters, etc., is the same frequency used in microwave ovens. It is the frequency that is known to maximize the absorption of radiation in mammalian tissue!!!  The fact they are using this particular frequency in our everyday devices is not an accident. See here for more info on this.

Below is an excerpt from my book which reveals how the media are alerting people to the fact that temperatures are going to rise — although they never mention that this heating is due to the intensification of 4G and 5G cell towers, transmitters, boosters, antennas, satellites, etc., all around the world. They also admit that BIRTH DEFECTS WILL ENSUE as a result of the excess heating, which heating is caused by RADIATION, although they claim it is due to “climate change.”

As discussed above, radiation heating is a major threat to the survival of fetuses and all life forms. Yet we are not being told The Truth about this. Instead, the FCC and various other captured alphabet agencies[1] allege that, only “high levels” of exposure to non-ionizing radiation can cause excessive heating, while the “low levels” we are currently enduring are perfectly safe.

“Tissue damage in humans could occur during exposure to high RF levels because of the body’s inability to cope with or dissipate the excessive heat that could be generated… [But] studies have shown that environmental levels of RF energy routinely encountered by the general public are typically far below levels necessary to produce significant heating and increased body temperature.”[2]

Hence it is important to be wary of mainstream sources of information, as well as industry-funded “science,” since both are notoriously fraudulent.

“A survey conducted by the New York based publication Microwave News in 2006 consisted of examining papers on microwave effects on DNA that were published in peer-reviewed journals since 1990. A total of 85 papers on the topic were identified. 43 of the papers reported finding a biological effect and 42 did not. Of the 42 no-effect papers, 32 were identified as having been funded by either the U.S. Air Force or industry. With the 43 papers that reported effects, only 3 were identified as being funded by Air Force or industry. This survey thus suggests that the source of funding has a strong influence on the outcome of research.”[3]

“Since they scorn the use of their science for the purpose and profit of life, they deliver their science to the service of death… The intellects who seek escape from moral values are the damned on this earth. Theirs is the guilt beyond forgiveness.”[4]

Medical science, too, is disturbingly invalid.

“The case against science is straightforward: much of the scientific literature, perhaps half, may simply be untrue.”[5]

“Medical journal editors are paid huge sums by pharmaceutical companies each year. This is something most of us already know – we see the sponsored pens and all the fancy conferences doctors go on thanks to ‘big pharma’. But that’s only a small part of it. The industry also just hands them money directly… Of the journals that could be assessed, 50.6 percent of editors were receiving money from the pharmaceutical industry – in some cases, hundreds of thousands of dollars… The average ‘in hand’ payment in 2014 alone was US $27,564, plus research funds. Worst on that list is the Journal of the American College of Cardiology (JACC), where 19 of its editors received, on average, US $475,072 personally and another US $119,407 for ‘research’.”[6]

Despite the claims being made by the media and fake scientists, heart attacks and congenital heart defects are not being caused by “greenhouse gases” or carbon emissions leading to “climate change.” Rather, heart defects are being driven by increasing exposure to artificial radiation and the accompanying radiation heat being emitted from non-ionizing technologies like cell towers, cell phones, cordless phones, baby monitors, prenatal ultrasound, etc.

Levels of radiation heating are about to intensify with the roll‑out of 5G and, from the articles above, we can quickly discern that those who are responsible for unleashing this technology in our world are alerting us to the fact that a whirlwind of birth defects is about to ensue, and they intend to blame it on “climate change.”

“Heat exposure for mothers across the U.S. is set to rise… Pediatric heart disease stemming from structural heart malformations may become an important consequence of rising temperatures.’”[7]

Increasing exposure to ultrasonic irradiation in utero is also contributing to a rising number of brain defects which should concern us greatly since billions of children around the world have been exposed to this technology and huge numbers are now autistic.

“Brain defects were produced at all stages of gestation but tended to involve the forebrain more at earlier times. Defects such as fusions of the ribs or vertebrae, spina bifida, and limb reductions were produced… The types of malformation produced by ultrasound thus appear to follow the same pattern of change with gestational age as do those produced by X-ray irradiation.”[8]

Many children have been repeatedly exposed to ultrasound throughout gestation, and then continuously for hours during hospital birth through electronic fetal heart monitors.[9] This type of extended exposure can literally cause death.

“Pregnant DHS mice bound to a board were irradiated on the 9th day of gestation with continuous wave (2.25 MHz) ultrasound for a period of 5 hours… The rate of fetal death was said to be increased significantly in the irradiated group. Later, the same authors reported a statistically significant increase in fetal abnormalities in a different mouse strain… and a significant effect on fetal mortality.”[10]

Sadly, women are led to believe that prenatal ultrasound will somehow prevent their babies from dying, but the Truth is, ultrasound can kill their babies.

“That night, in the middle of the night, I got intense cramping and back pain, fever, and then I passed the baby that night. That was really, really devastating and I honestly didn’t think anything about the ultrasound. I was just like ‘Oh I miscarried. It happens to people.’ But then I spoke to someone who I know who is an RN and they were like ‘Oh, she had an ultrasound? You are the sixth person who told me recently that they miscarried right after an ultrasound.’”[11]

“I had a miscarriage right after my first ultrasound, which showed everything was normal (at 5 weeks). Left clinic, came home, started bleeding. Coincidence? Who knows, but next time I won’t let doc scan me until much later.”[12]

“Obstetricians in Michigan… studied 57 women at risk of giving birth prematurely. Half were given a weekly ultrasound examination; the rest simply had pelvic examinations. Preterm labour in the ultrasound group was more than twice that of the control group (52 per cent compared with 25 per cent).”[15]

“A study done in Helsinki and published in 1990 found that if the physiotherapist was pregnant and handling ultrasound equipment for at least 20 hours a week there was a significant increase in the risk of spontaneous abortion.”[16]

Spontaneous abortion can be induced by excessive ultrasonic heating, and although such heating has been documented in dozens of scientific studies, the medical establishment has refused to act responsibly to put a halt to the use of this technology during pregnancy.

[3] Susan Pockett, Conflicts of Interest and Misleading Statements in Official Reports about the Health Consequences of Radiofrequency Radiation and Some New Measurements of Exposure Levels, Magnetochemistry, 2019, 5(2): 31 https://www.mdpi.com/2312-7481/5/2/31/htm

[12] Comment from an anonymous mother calling herself “S,” at Chris Kresser, Natural Childbirth IIb: Ultrasound Not as Safe as Commonly Thought, Feb 21, 2019. https://chriskresser.com/natural-childbirth-iib-ultrasound-not-as-safe-as-commonly-thought/

[16] Beverley A. Lawrence Beech, Ultrasound – They Mythology of a Safe and Painless Technology, AIMS.org.uk, Paper presented to the Royal Society of Medicine, October 3, 1995. http://www.aims.org.uk/OccasionalPapers/ultrasoundTheMyth.pdf