“…Safe Schools Coalition has manipulated language to give ‘safe’ a whole new meaning…It’s a clever marketing strategy devised by activist Kevin Jennings in Massachusetts in the 1990s: tapping into values that everyone has in common, a desire for ‘safety’ is universal, and particularly when it comes to children.”

The longtime Deputy Director of ARCSHS is Prof. Gary Dowsett, and he has been Acting Director on two occasions, for a significant period of time. The first was in 2000, from January to August; and the second was in 2010, from July to December. Hence, the “Safe Schools” program (launched in October 2010) was launched during a period when Dowsett was Acting Director. [Source: ARCSHS Annual Report 2010]

In 1982, he authored an article for the journal ‘Gay Information‘ [issue no. 11, pp. 34-38], which was published by a Sydney-based organisation called ‘Gay Information Service’. The article was titled ‘Boiled Lollies and Bandaids: Gay Men and Kids‘ (click here to view the original). Here are some excerpts:

“First, we have three legal/social questions to win: custody rights for gay men and lesbians; the legal right of paedophiles and their young loves; and finally, the sexual rights of children as a whole.”

“And I also have a friend, a paedophile, who is working very hard on making sense out of his relations with boys. Those relations consist of, among other things, a large amount of nurture and support for these boys, a real caring for their welfare and growth.”

“How different then is that gentle, tentative sexuality between parent and child from the love of a paedophile and his/her lover? From all their accounts and from many academic studies (some worse than others), that kind of love, warmth, support and nurture is an important part of the paedophilic relationship.”

“The current paedophilia debate then is crucial to the political processes of the gay movement: paedophiles need our support, and we need to construct the child/adult sex issue on our terms.” 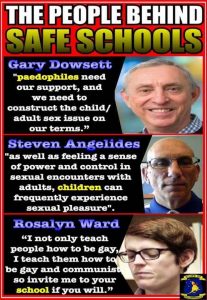 Dowsett has previously placed this article on his résumé which was, until recently, available on the official La Trobe University website at the following URL: http://www.latrobe.edu.au/staff-profiles/data/docs/gwdowsett.pdf

The résumé is still available via the Internet Archive’s ‘Wayback Machine’, here.

In 1996 Dowsett, then a sociology lecturer at Macquarie University, was quoted in the Sydney Morning Herald newspaper on a matter concerning two University of Newcastle sociology lecturers who were caught teaching students about “inter-generational sex”. Newcastle Police’s Child Protection Investigation Unit obtained the relevant lecture materials and submitted them to the Wood Royal Commission, saying they could have an insidious influence on young students.

“Ever since Margaret Mead, we have known well that human sexuality takes different forms in different cultures. If we start restricting the capacity of academics to inquire and research – and it’s very easy to start with pedophiles – where does it end?”

The lecturers were Dr. Terrence Leahy and Dr. James Wafer.

Leahy’s previous writings on “inter-generational sex” had been extensive, including his 1991 PhD thesis and a 1992 journal article titled “Positively experienced man/boy sex: the discourse of seduction and the social construction of masculinity”.

“Like communists and ­homosexuals in the 1950s, boy-lovers are so stigmatised that it is difficult to find defenders for their civil liberties … in 20 years or so, when the smoke has cleared, it will be much easier to show that these men have been the victims of a savage and undeserved witch hunt.”

Both Leahy and Wafer remain employed by the University of Newcastle.

In 2000 a book titled “Framing the Sexual Subject” was published. An essay by Dowsett titled ‘Bodyplay: Corporeality in a Discursive Silence’ constitutes the first chapter. The following is an excerpt:

“Many other men I have interviewed over the last ten years of research reported similar childhood experiences—regular sex games with neighbors, with schoolmates, sometimes with older men. The boys taught each other about erections and the orifices they might penetrate, about the pleasures of arousal, and inevitably about ejaculation. Most learned sex acts with peers; occasionally older youths or siblings were involved. Some reported learning from schoolmates of places (called in Australia “beats,” and usually public parks or toilet blocks) to find sex with grown men and with other boys. Such sex play was not furtive, but was carried on away from the gaze of parents and other adults. It was also a very sociable activity, collectively pursued, yet free from the preponderant discursive definition to which sexuality is often prone. In this sense, such sexual exploration occurred in social lacunae in which the operation of general prohibitive and regulatory discourses on sex was imperfect and patchy in penetration. Its success, if any, lay in producing secrecy, not celibacy.”

“The man on the couch lifts his head a little and briefly surveys the congregation, notes the erect man at his side, and slowly lowers his head onto folded arms. He raises his buttocks slightly to the touch of his attendant, giving consent. Over the next hour, the man on the bench is fucked by ten men in sequence, always with condoms, always with his head cradled on folded arms, after the first glance never seeking to assess the successors laboring upon him, and only in momentary crescendoes arching backwards to receive more fully his thrusting devotees in their perverse salute to the sun.”

The pro-family values organisation FamilyVoice Australia has recently written about another La Trobe University academic working within the ARCSHS. Click here to access that information.

Roz Ward is the (now former) Coordinator of ‘Safe Schools Coalition’ in Victoria, and is one of the primary architects of the program. She is an open communist, a longtime member of Socialist Alternative, and is heavily involved in the education unions.

In 2014 she was caught on video saying the following:

At the 2015 Marxism Conference in Melbourne she made the following statements:

“LGBTI oppression and heteronormativity are woven into the fabric of capitalism…there’s no denying that some areas of life have improved for LGBTI people and programs like Safe Schools Coalition are making some difference, but we’re still an extremely long way from liberation…only Marxism provides both the theory and the practice of genuine human liberation.”

“To smooth the operation of capitalism the ruling class has benefited, and continues to benefit, from oppressing our bodies, relationships, sexuality and gender identities alongside sexism, homophobia and transphobia; both serve to break the spirits of ordinary people, to consume our thoughts, to make us accept the status quo and for us to keep living or aspiring to live, or feel like we should live, in small social units and families where we must reproduce and take responsibility for those people in those units.”

At the 2013 Marxism Conference she said:

“I not only teach people how to be gay, I teach them how to be gay and communist, so invite me to your school if you will.”

Ward was a co-author of a 2014 ARCSHS-published report titled ‘From Blues to Rainbows‘. This report had been prepared from secret discussions with children conducted without the knowledge or permission of their parents. According to a report in The Australian newspaper:

“Vulnerable teenagers as young as 14, including some who had ­suicidal thoughts, were secretly interviewed without parental knowledge about their gender and sexuality by a university ­research team with links to the Safe Schools program.”

How were these children contacted? Disturbingly, they were recruited via social media, and the interviews were conducted via an online instant messenger platform, often in the evening to avoid parents finding out what was going on. The operation was promoted by pro-homosexual activist organisations and publications, as well as by the ABC’s music radio station, Triple J.

In 2014 Ward was heavily involved in protests against the Abbott Government’s first budget, and she has called for immigration detention centres to be burnt down. The following screenshot was taken on the 17th of February, 2016: