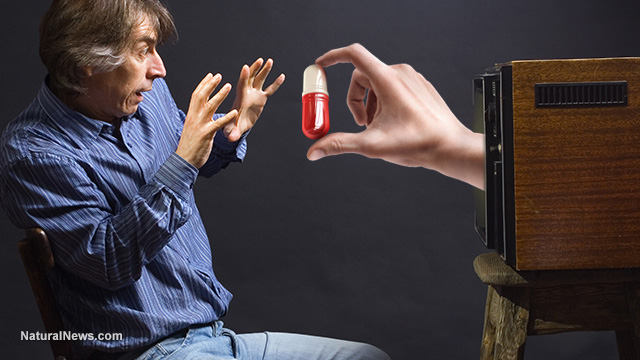 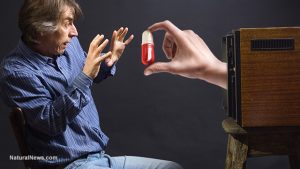 Television viewers are inundated with drug ads from Big Pharma. It’s a flood.

Have you ever heard of these drugs? Otezla, Xeljanz, Namzaric, Keytruda, Breo, Cosentyz? Not likely. If you have, do you know what conditions they treat? Highly unlikely. But there they are, splashed in commercials.

Why? Who is going to remember to ask their doctor whether these and other obscure meds are right for them?

The answer is: IT DOESN’T MATTER WHAT DRUGS ARE BEING ADVERTISED.

If Pharma can pay enough TOTAL money for ads, for ALL drugs, and dominate the allotted TV time for commercials, it can control the news—and that is exactly what it wants to do.

Pharmaceutical scandals are everywhere. Reporting on them, wall to wall, isn’t good for the drug business. However, as an industry ponying up billions of dollars for TV ads, Pharma can limit exposure and negative publicity. It can (and does) say to television networks: If you give us a hard time on the news, we’ll take our ad money and go somewhere else. Boom. End of problem.

Face it, the billions of dollars Pharma is paying for TV ads are a drop in the bucket, compared with its profits gained from selling the drugs. The ads are a good investment. As a bribe.

There is another reason for the insane flood of TV drug ads:

By their sheer number, they convince viewers that medical drugs (no matter what they are) are absolutely necessary.

Hour by hour, viewers numbly watch drug commercial after commercial. The overall message is: To keep illness from your door, to cure illness, to alleviate illness, you must take these medicines. THIS IS LIFE IN THE 21ST CENTURY. You’re all sick, and you need help, and this is the ONLY kind of help there is.

The drug companies could invent names of fake drugs that don’t even exist, advertise them in a cascade on television, with the same intent. DRUGS ARE AS VITAL TO LIFE AS WATER OR AIR.

But what about all those dire warnings of side effects from the drugs? By law, the companies must include them in their commercials. Well, the companies have calculated that, on balance, the stark, front-line, unending message of DRUGS, DRUGS, AND MORE DRUGS will outweigh the warnings in viewers’ minds.

If the television audience is nailed with the idea that they can’t escape; that their health always hangs in the balance; that dire illnesses are always waiting in the shadows to strike; that the slightest ache or pain could be a precursor to a crippling or fatal disease; and drugs are the only solution and protection—they’re going to overlook the warnings about side effects.

ALL IN ALL, DRUG ADS ARE NEWS.

That’s the approach. Pharma is blasting out 24/7 news asserting modern medicine’s central and commanding role in the life of every human.

It’s a gigantic and stupendous piece of mind control, but when did that ever stop tyrants from inventing reality for the masses?

Implicit in “ask your doctor if drug X is right for you,” is the message: “go to your doctor.” That’s the key. If the ads can put a viewer into the system, he will be diagnosed with something, and he’ll be given a drug for it.

So the drug ads are also promotions for doctors, who are the arbiters and the decision makers. Some kind of medical need (drugs) always exists—and the doctor will tell you what it is. And all patients should OBEY. Even if, in the process, they go broke.

Take the case of Opdivo, a drug that treats squamous non-small cell lung cancer. Cost? $12,500 a month. Patients on Medicare will pay $2500 a month out of their own pockets. And the result?

Wall St, Journal: “In the clinical study on which the Opdivo ad bases its claims, the drug extended median patient survival to 9.2 months from the start of treatment…”

The cancer patient pays $22,500 for nine months of survival, during which the suffering continues, and then he dies.

The ad isn’t mentioning THAT.

The ad relies on the doctor to convince the patient to go along with this lunatic program.