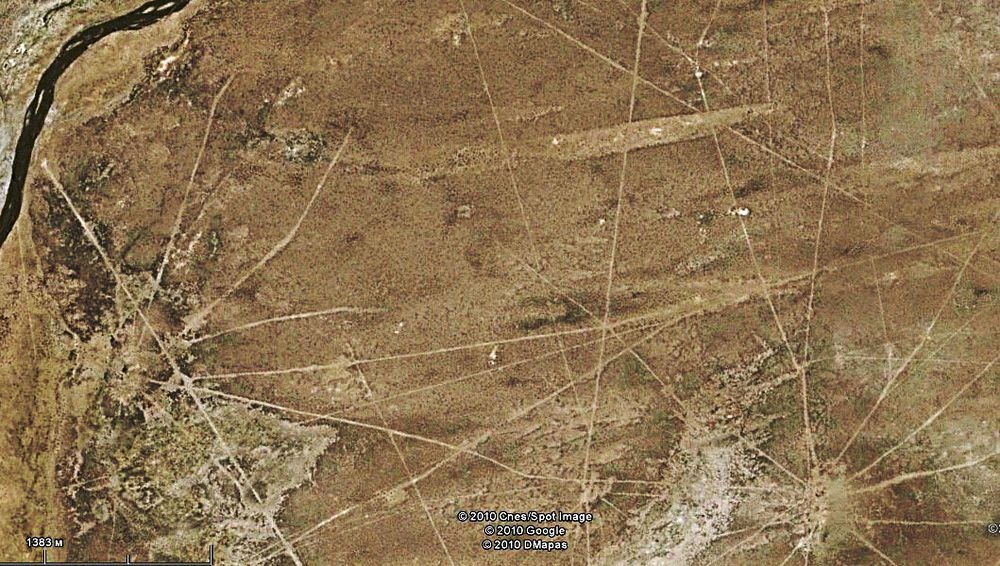 Crisscrossing the highland plains in western Bolivia is a network of thousands of near perfectly straight lines etched into the ground. These lines do not make any figures or shapes, but they go on remarkably straight for tens of kilometers. Whoever created them worked extremely precisely, which was not easy task in this hilly terrain with rocks, shrubs and other natural obstacles.

Named after the nearby volcano, the Sajama Lines lie under the shadow of Bolivia’s tallest peak. From the ground, the lines are practically invisible and easy to overlook. It’s only from the air that one can recognize the incomprehensible extent of what maybe the world’s largest prehistoric artwork.

The Sajama Lines average between one and three meters wide, and run from a few meters to several kilometers. The longest of them are about twenty kilometers in length. They were created by scrapping away the dark oxidized surface rocks to expose the lighter soil beneath. Often, the lines radiate from a common area, usually somewhat elevated, allowing the lines to be seen more easily. Researchers think that these “radial centers” could be sites of ancient shrines, burial towers or even towns. One theory is that the lines were used by the indigenous people as guide when they made sacred pilgrimages. Indeed, some of the modern roads connecting towns appears to have been built upon these straight lines. Though the region is now sparsely populated there is evidence that some of the lines are still in use as footpaths.

In all, the Sajama Lines cover an area of approximately 22,000 square kilometers, which is about fifteen times larger than the famous Nazca lines in southern Peru. Rough estimates put their linear length at an astonishing 16,000 kilometers. Some consider the Sajama Lines to be the largest artwork in the world.

The sheer number of lines present and the relative area they cover suggest that they have been constructed over many generations spanning hundreds and maybe even thousands of years. The arid climate of the high altiplano, with its sparse rainfall and slow-growing vegetation, has kept the lines relatively intact.

Despite being located near the more popular Nazca Lines in Peru, very little research have been devoted to the Sajama Lines. It was only in 1932, that the first brief reference to the geoglyphs was made in English by the Argentine professor, Aimé Félix Tschiffely, who earned fame by riding on horseback from Argentina to New York City. That same decade, anthropologist Alfred Metraux brought the lines and associated structures to the attention of scholars through his ethnographic fieldwork about the Aymara and Chipaya people of the Carangas region.

The first scientific study of the lines were made in 2003 by the University of Pennsylvania, in association with a now-defunct organization called the Landmarks Foundation. Since then, no further studies appear to have been conducted. Aside from satellite images, there is not even a decent photograph of the lines available on the internet.