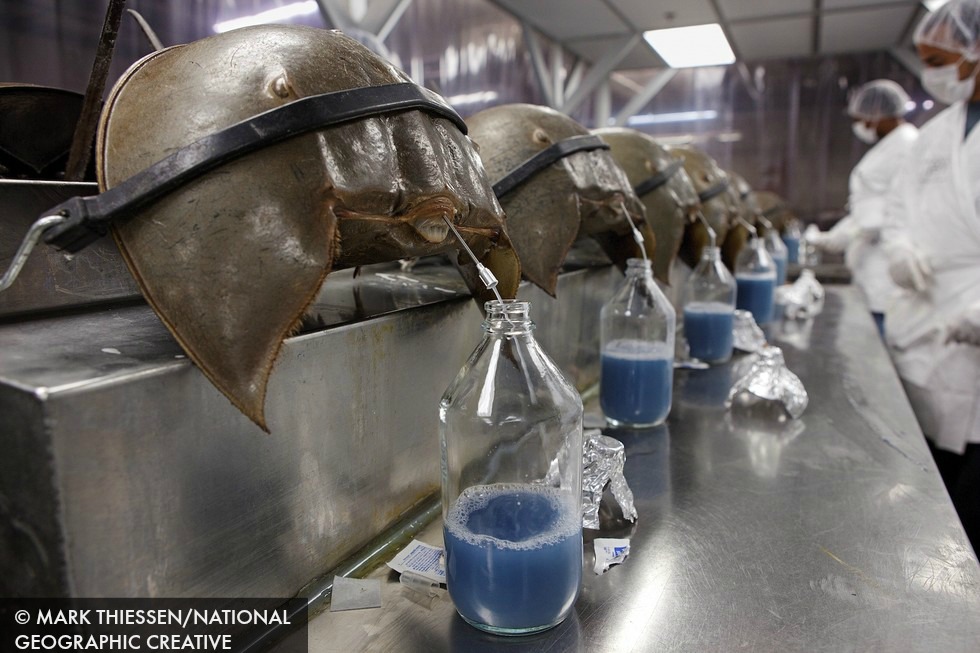 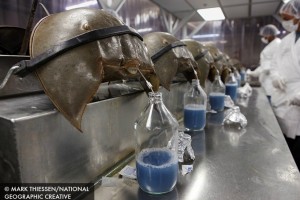 Arguably, vaccines are anything but vegan or “animal friendly” in case people were wondering. Science as a whole somehow maintains carte blanche when it comes to animal cruelty. But besides the typical cloned human cell lines and animal products used to make vaccines, another type of questionable practice takes place behind closed doors and looks more like a ghoulish scene from a dystopian sci-fi movie.

In the United States, the blue blood circulating in horseshoe crabs is vampirically taken from the strapped down creatures in order to test vaccines. Who knew? A tube is inserted into them as a crude siphon that drains them of their life force into clear jars before them.

Then again, we are talking about a field of work that just figured out that babies feel pain and then went on to discover that they feel the pain of vaccines even worse according to brain wave tests that were long overdue. It’s a wonder that the vague whole of “science” – which is often beholden to the corporate oligarchy – is worshiped like a cult with this blatant contradiction of cruelty. As you can see in the quote below, this practice takes place at the behest of pharmaceutical companies.

The Dodo is a popular animal advocacy site that celebrates all things animals.

The females can lay 90,000 eggs, which feed countless species of shorebirds and bolster whole ecosystems. Only 10 of those eggs survive.

And, if you live in the U.S., the brilliantly blue blood of these animals has been used to test every vaccine you’ve ever had.

Half a million horseshoe crabs are caught and bled each year in laboratories linked to pharmaceutical companies. The animals are strapped in while

their blood is extracted for 24 to 72 hours. Bottles fill up with their blood, a stunning shade of blue, which will be used to test vaccines for harmful bacteria.

Between 10 and 30 percent of the horseshoe crabs die as a result of this artificial bleeding, and female crabs are less likely to procreate after being bled. That is one way this process messes with the whole ecosystem that depends on their presence and the presence of their eggs to nourish the animal food chain. Data on global species of horseshoe crabs is insufficient, but in North and Central Amercia they are near threatened and considered in decline and vulnerable to overfishing. Is it any wonder when half a million are temporarily kidnapped each year?

They are said to be snatched while they make their way to mate and bird populations that feast on their eggs are declining. While the crabs are not directly killed and the intent is to return them to nature after the blood reaping, it is still stomach-churning to see for the first time. Alternative practices are in development but it is a wonder that the world – particularly the animal advocacy groups – went so long without noticing. (Read the rest of Schweig’s report.)

What do you think about this practice of bleeding horseshoe crabs to test vaccines?

One thought on “The Shocking Backroom Image Behind Every U.S. Vaccine”