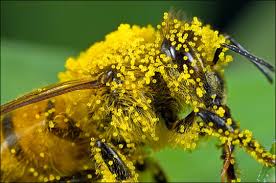 Pollen is the male seed of flowers. It is required for the fertilization of the plant. The tiny particles consist of 50/1,000-millimeter corpuscles, formed at the free end of the stamen in the heart of the blossom. Every variety of flower in the universe puts forth a dusting of pollen. Many orchard fruits and agricultural food crops do, too.

Bee pollen is the food of the young bee and it is approximately 40% protein. It is considered one of nature’s most completely nourishing foods. It contains nearly all nutrients required by humans. About half of its protein is in the form of free amino acids that are ready to be used directly by the body. Such highly assimilable protein can contribute significantly to one’s protein needs.

Gathering pollen is not as easy as it sounds. Once a honeybee arrives at a flower, she settles herself in and nimbly scrapes off the powdery loose pollen from the stamen with her jaws and front legs, moistening it with a dab of the honey she brought with her from the hive. The enlarged and broadened tarsal segments of her legs have a thick trimming of bristles, called pollen combs. The bee uses these combs to brush the gold powder from her coat and legs in mid-flight. With a skillful pressing movement of her auricle, which is used as a hammer, she pushes the gathered gold into her baskets. Her pollen baskets, surrounded by a fringe of long hairs, are simply concave areas located on the outside of her tibias. When the bee’s baskets are fully loaded, the microscopic golden dust has been tamped down into a single golden grain, or granule.