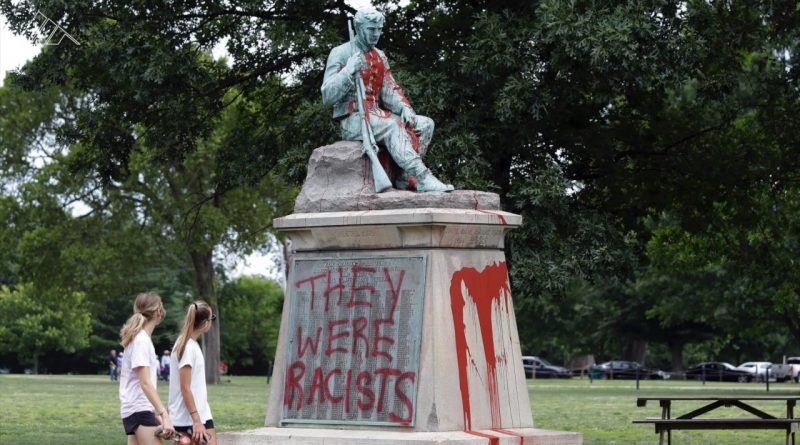 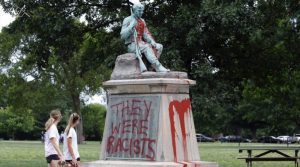 As I am sure you have already seen, BLM, Antifa, and the other assorted anti-Whites have been defacing monuments and toppling a number of statues, and there are calls for even more to come down.

Some of the targets are Christopher Columbus, Civil War leaders like Robert E. Lee, and slave owners like George Washington and Thomas Jefferson, but the anti-Whites have even gone after the statue of an abolitionist named Matthias Baldwin, labeling him as a “colonizer.” 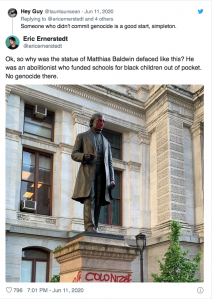 According to Joe Walsh, a member of Friends of Matthias Baldwin Park, “He hired blacks in his shops when that was not the norm. He was BLM [Black Lives Matter] before there was a slogan.”

The issue is that these “protestors” do not give a damn what Matthias actually did, since he is a historical White man, and that proves he is evil. Besides, the anti-Whites do not want us to be reminded of all the White people who fought and died to end the institution of slavery. Instead of blaming White people for slavery, since only a tiny fraction of our ancestors even participated in it, these blacktivists should be thanking White people endlessly for setting them free and allowing them to live amongst us, and not shipping them all out of the country, like Abraham Lincoln wanted to do. Since that time, we have been feeding, clothing, and elevating Black people to our own detriment, and the destruction of our history is the thanks we get (and of course all the violence from blacks).

Imagine if White people got sick and tired of the insane number of rapes, assaults, robberies, and murders committed by black people every year that we decided to go and destroy all statues and monuments dedicated to historical black figures, renaming every Martin Luther King boulevard after pro-White leaders. Instead of siding with us and pushing new legislation intended to appease us, the ruling establishment would label us all domestic terrorists and use extreme violence to stop us. In this instance, I have a feeling the anti-Whites would be cheering on the police and military.

Black people are being encouraged to destroy White history by the jews who run our country. This is why there is serious talk in Congress about renaming 11 military bases that were named after Confederates. The Republicans in the Senate even voted to move forward with this plan.

Burning, looting, and murdering in cities across America apparently is all that is needed for the Pentagon to eliminate all traces of “White supremacist history” from its institutions. The Navy has already banned the Confederate flag (along with NASCAR). This is just continuing the trend that was started right after Dylann Storm Roof “shot up” a black church in the Charleston PsyOp.

Now Cops and Live PD are canceled. Even children’s cartoon Paw Patrol is feeling the heat. Anything that even remotely resembles the White man’s rule of law is being abolished in favor of chaos, which can be seen with the Capitol Hill Autonomous Zone (CHAZ) of Seattle. No one in the city or state government is stepping in to stop these “progressives,” who immediately set up their own borders (I guess borders are only evil when White people use them) and police force, led by rapper warlord Raz Simone.

Of course all of this was already planned, and they are not simply caving to the pressure of the mob. The United States is being deliberately weakened, but to what end? Is it really so that Black people can have more power in the country? No. In my opinion, we are being set up for either martial law or a Red Dawn type scenario, wherein foreign actors (UN or other Communists) will have to step in, disarm Americans, and restore “order” to the chaos.

In the ensuing chaos and “reconstruction,” White history will be thoroughly destroyed, so that any last vestiges of the truth will be gone, and new generations of children can be indoctrinated with a completely false idea of America’s past. This is all to ensure that White people never regain any modicum of control over our own destiny and the direction this country is headed. Destroying our past is a great way to control our future. 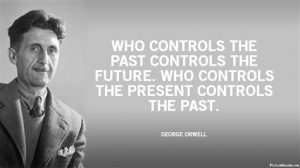