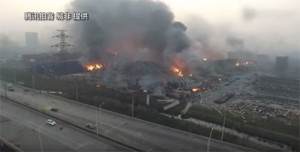 The Tianjin explosion was waged as an act of “kinetic retaliation” by the Pentagon in response to China’s currency war Yuan devaluation, according to dissident sources from mainland China. The Chinese government has put in place unprecedented secrecy surrounding the mysterious explosion, and aggressive police state tactics are now being invoked to control the flow of information surrounding this event.

“Last week’s explosions sent massive fireballs into the sky and hurled burning debris across the industrial area at the world’s 10th-largest port, burning out buildings and shattering windows kilometres away,” reports the Daily Mail UK.

The Chinese government’s official explanation for the explosion, which has now killed 114 people, is a complete whitewash. China is going to declare regional martial law in the next 18 days, Natural News has learned, in order to exercise total control over the movement of people and information. The government has banned reporters from entering the area and has begun arresting bloggers who promote what the government calls “conspiracy theories” regarding the cause of the massive explosion.

China has blacked out reporting on Tianjin in exactly the same way the U.S. media blacked out reporting on Dr. William Thompson, the CDC whistleblower who admitted the CDC buried evidence linking vaccines to autism. In both China and the United States, when the government doesn’t want the citizens to know something, it censors the story across the entire state-run media, invoking “information totalitarianism.”

Both before and after the massive explosion, the Chinese government has been flying “black helicopters” in formation across Beijing. (Update: Previously, this article stated the helicopters began flying after the explosion, but we have been corrected on this point, as helicopters were witnessed in the sky in the days before the explosion as well.) Chinese dissidents took numerous photos of these helicopters and were able to deliver these exclusive pictures to Natural News: