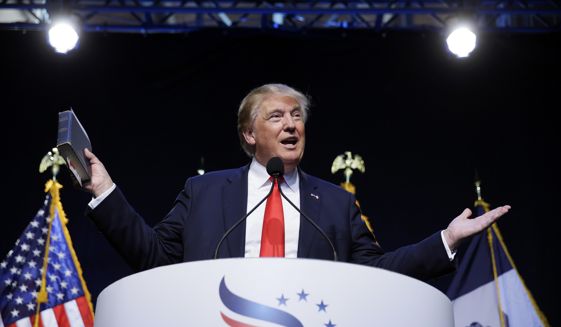 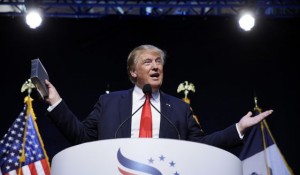 GOP presidential front-runner Donald Trump shared more of his views on foreign policy Friday, telling an audience in Oklahoma his 2016 rivals want to “start World War III over Syria” and suggesting the U.S. let Russia take up the fight against the Islamic State in the region.

“They want to start World War III over Syria. Give me a break,” Mr. Trump said at the State Fairgrounds in Oklahoma City, The Hill reported.

“You know Russia wants to get ISIS right,” Mr. Trump said, using the acronym for the Islamic State of Iraq and Syria. “We want to get ISIS. Russia’s in Syria. Maybe we should let them do it? Let them do it. What the hell are we, crazy?”

Mr. Trump’s remarks come as Russia is increasing its military forces in Syria, a move which has alarmed U.S. military and administration officials.

The U.S. is concerned that Russia will lend its own troops to help embattled Syrian President Bashar al-Assad take on the Islamic State terrorist group. While the U.S. is also leading a coalition force against the terror group, it also opposes Mr. Assad’s regime and has urged him to step down from office.

Mr. Trump’s comments on foreign policy have been heavily scrutinized and may be a stumbling block on his road to the White House.

He was widely criticized for a radio interview with Hugh Hewiit earlier this month, in which he appeared to confuse the names of top terrorist leaders and mixed up the Kurds with the Iranian Quds force — an elite military unit under the command of the Ayatollah and linked to terrorist activities in the Middle East.

Mr. Trump, an opponent of the nuclear deal with Iran, also said Friday that the U.S. had only empowered Iran by invading Iraq.

“I said don’t go into Iraq. I’m the most militant person here, the most militaristic person you’ll ever meet. I believe in the military strongly but I didn’t want to see us invade Iraq,” he said, The Hill reported.

“We spend $2 trillion, thousands of lives, wounded warriors all over the place that I love by the way… we got nothing. We can’t even go over there.”

Mr. Trump also said Iraq and Iran were in cahoots over oil in the region.

“And right now as you are standing here, Iraq is negotiating with Iran. They’re going to merge and Iran is going to get the oil… and the one that gets the rest of it is going to be ISIS.”