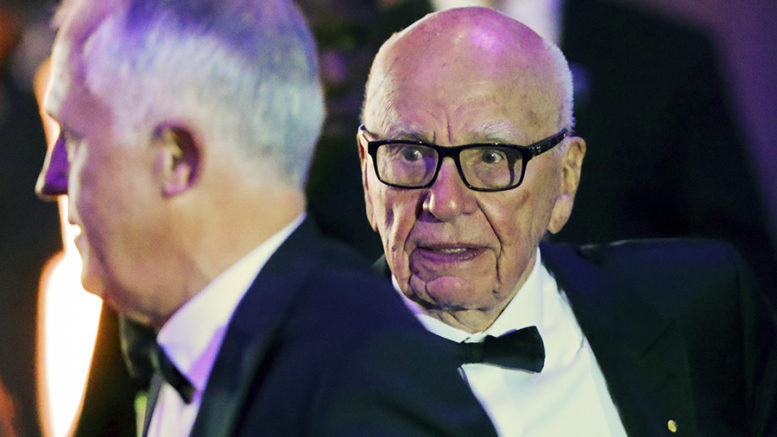 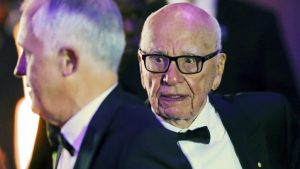 FILE – This is a Thursday, May 4, 2017 file photo of Rupert Murdoch, right, Chairman of Fox News Channel, as he walks with Australian Prime Minister Malcolm Turnbull, left, to their table for dinner aboard the USS Intrepid, a decommissioned aircraft carrier docked in the Hudson River in New York. Britain’s Culture Secretary Karen Bradley is ruling on whether to permit the proposed 11.7 billion pound merge of Sky and Twenty-First Century Fox. Bradley is set to offer her verdict Thursday June 29, 2017. The merger would allow Rupert Murdoch to consolidate his power base in British media. (AP Photo/Pablo Martinez Monsivais/File)

READ MORE AT THE PEN

Malcolm Turnbull’s latest scandal, exposing connection to a $12 million share in a scam run by an outfit called the United States Studies Centre, shouldn’t be a shock to anyone.

The cash went into the hands of his wife and son in law James Brown. More important still is that the Murdoch family, through Rupert’s nephew, Matt Handbury, were also involved in the action.

This is yet one more piece of the jigsaw that illustrates the close relationship between the media tycoon and the Turnbull government.

The United States Centre is a foreign policy think tank, owned by the Turnbull and Murdoch families. It is based at Sydney University, and operates with the American Australian Association, and aims to extend influence across Australian universities.

We would have been none the wiser, were it not for an article published by the Financial Review (23 July 2018), which has brought the affair into public view.

Generosity of this sort is carefully kept away from public view. There is no transparency and the usual tendering processes are bypassed.

It’s not the first time this has happened though. Back in 2007, $11 million were handed over to Australian Rain Corporation, then headed by Matt Handbury. Then Foxtel got $30 million. There is a pattern here.

If anyone ever doubted that Turnbull is a Murdoch creature, this should lay that to rest.

Back to the think tank.

The financial review reported that:

“The grant, which was announced on Sunday, will be provided through the AAA, which was co-founded by Rupert Murdoch’s father, Sir Keith Murdoch. Part of the money will go to US Asia Centre, which is the US Study Centre’s sister organisation located at the University of Western Australia…”

“The grant is an example of how politically connected organisations are often effective at lobbying governments for funding.

“Their son-in-law, James Brown, was the think tank’s research director from 2015 until a few months ago…”

This is going to chip away more of Malcolm Turnbull’s credibility, at a time of increasing public questioning about the connections between leading politicians and big business, and a perception that corruption is beginning to spiral out of control.

When the prime minister gets caught with his own hands in the till, whether directly or indirectly, it doesn’t exactly lift the standing of Australia’s politicians and political institutions. And the longer he remains in office, the more tarnished they get.

For those who can see a little further than the personality, it throws up the question of what changes can be made in Australia to stamp out this sort of practice. Unless this can be done, the faces can change, but business will go on as usual.

The other matter is the noxious influence of Murdoch and his empire. It turns up everywhere and begs for something to be done about it, and until this is sorted out, Australia will continue to suffer from it.

2 thoughts on “Turnbull corruption and Murdoch”