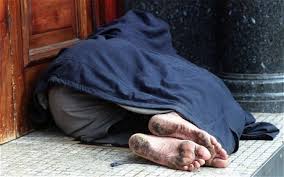 (ANTIMEDIA) United Kingdom — Lack of social housing, cuts to welfare, and extortionate private rents continue to push U.K. homelessness out of control to a scale that is impossible to quantify. While rough sleeping is the most visible form of homelessness, it remains the most difficult to measure with local authorities no longer required to carry out counts of rough sleepers.

That said, one only has to stroll around any major British city to see the extent of the problem, and in the coastal city of Brighton & Hove, three rough sleepers died over the festive period alone.

According to homeless charity Shelter, the number of rough sleepers has trebled in eight years. In contrast, a 2015 report by Empty Homes — a charity campaigning for vacant homes to be made available for those who need housing — revealed over 200,000 long-term vacant dwellings (homes unoccupied for over six months) in England and over 600,000 total empty homes.

However all’s not lost and behind the scenes, work is underway to make the most of the scandalous number of empty properties in the U.K. Attempting to meet the dire need for housing, 103 local campaigns have been initiated to plead with local councils to open up empty buildings for homeless people this winter.

Local Councils now receive a grant from central government to reduce the number of long-term empty properties in their area. The measure has undoubtedly encouraged local authorities to work with property owners to turn empty buildings into homes. Some have even used their payments to start dedicated empty homes teams.

In addition, a number of councils have begun to open up empty buildings to be used by the homeless. Manchester City Council started the ball rolling in November by announcing it would open up a former library and children’s home to be used as overnight shelters. The announcement came a month after two former Manchester United players, Gary Neville and Ryan Giggs, allowed a group of 30 homeless people to stay in the former Stock Exchange building they are converting into a luxury hotel.

Not to be outdone, and thanks to a task force of tireless campaigners, the southwest city of Bristol has recently followed suit. With the number of families officially classed as homeless rising from 40 in 2014 to over 140 in 2015, the council recently announced that two empty buildings will be used to provide up to 10 extra beds.

Despite the small steps, millions across the U.K. continue to face housing problems every day and people sleeping rough while buildings stand empty is shameful. Until the root causes of the crisis are tackled — and everyone has a safe, secure and affordable place to call home — charities and community organizations will continue dressing the wound of systemic failure.

If you want to play a part and report an empty property in your area, details can be found here.

This article (UK Cities Begin Opening Empty Buildings for Homeless) is free and open source. You have permission to republish this article under a Creative Commons license with attribution to Michaela Whitton and theAntiMedia.org.Anti-Media Radio airs weeknights at 11pm Eastern/8pm Pacific. If you spot a typo, email edits@theantimedia.org.