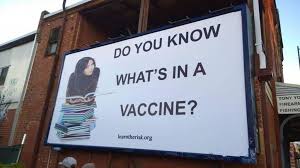 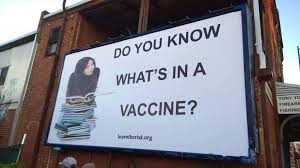 Do you know what’s in vaccines — or perhaps more importantly, is it “wrong” to ask such a question? LearnTheRisk.org, a non-profit organization founded by an ex-Merck employee, put up a billboard in Perth, Australia, which asked one important question: “Do you know what’s in a vaccine?” It’s a simple question, yet astonishingly few people know the answer to this question.

In response, the Australian Medical Association has demanded that this thought-provoking billboard be removed. The vaccine propaganda group says that even raising such a simple question is a “public health risk,” “misleading” and “conspiracy theory garbage.”

Demanding transparency in virtually any other arena would not be met with such hostility; in fact you might even get a gold star for demanding to know what’s in your food or your infant’s baby formula. But when it comes to vaccines, “transparency” is a four-letter word. Indeed, the fact that simply wanting to know what’s in vaccine is seen as such a despicable, rebellious act that it requires immediate silencing should be alarming enough.

Australian Health Minister Roger Cook publicly expressed his displeasure with the billboard, denouncing it as “nasty” and “devious.”

Cook declared, “This devious and nasty billboard behind us would have people believe that a reference to a U.S. website would actually provide useful information about how people can best look after their health care.”

Perth MP John Carey has also voiced his discontent about the billboard, claiming it was spreading “a deadly message.”We do not want this kind of gutter rubbish being promoted in my community,” he said.

“We know that vaccinations save lives, that is the simple reality,” he added.

Tell that to all the children who’ve been harmed and the families who’ve been torn apart. Children are suffering at the hands of a callous, profit-driven establishment; isn’t that all we really need to know?

More importantly, however, is the simple fact that denying the reality that vaccines can and do harm an untold number of children everywhere is patently wrong.

To use Carey and Cook’s own words, it’s “misleading” to promote the idea that vaccines are 100 percent safe — and it’s  total “gutter rubbish” that government officials are advocating for total compliance among their citizens with zero transparency.

Why are they so afraid of people asking what’s in vaccines? They probably don’t know what’s in them either — and as long as they remain ignorant, they can try to escape culpability. When people know what’s in vaccines, and become aware of the damage they can cause, they aren’t going to be happy with their elected officials who’ve done everything in their power to foist inoculations upon their children. And when the curtain falls on vaccines, their industry masters aren’t going to be happy, either.

As Natural News has reported, Australian Prime Minister Malcolm Turnbull and his wife have repeatedly been called out for their ties to multinational industries — including Big Pharma.

Not long ago, Australia came under fire for flat-out banning unvaccinated children from early childhood programs.

The country down under has been repeatedly slammed for their vaccine-pushing efforts, which have included fining parents for not vaccinating their kids. Vaccine tyranny is clearly a growing phenomenon, especially in Australia — which means health freedom is more important than ever.

Learn more about what’s in flu shots and other vaccines at Vaccines.news.

One thought on “Vaccine authoritarians try to censor billboard that dares ask, “Do you know what’s in a vaccine?””