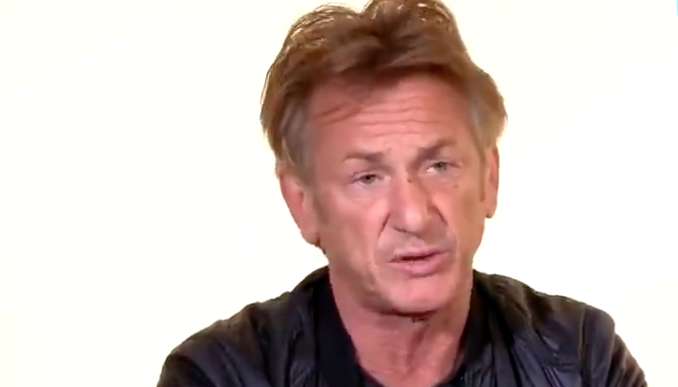 BLOW IT OUT YOUR ASS SEAN!!!

Six years after appearing as a voiceover character in The Angry Birds Movie, 62-year-old Sean Penn appeared with Extra to offer up his expertise on covid “vaccines.” As you might expect, the washed-up Hollywood what’s-his-face believes that the deadly shots should be mandatory, and those who refuse them thrown in jail.

When asked by the Extra interviewer how he feels about the growing prevalence of “anti-vaccine rhetoric,” Penn responded that he believes those who oppose getting injected with Big Pharma chemicals are suffering from a “cowardice of conviction.”

“I think that is an unwillingness to engage in a culture of common sense,” a makeup-covered Penn rattled from a director’s chair. “That, at this point, it seems criminal to me, actually.”

Penn further revealed that he believes the unvaccinated should choose to check out of society completely so the fully vaccinated can feel safe everywhere they go, including to and from the film studio.

“I really feel that if someone chooses not to be vaccinated, that they should choose to stay home,” he said. “Not go to work. Not have a job. As long as we’re all paying for these streets, we’ve got to ride safely on them. And so, I’m just hopeful that the mindset will change.”

While Penn says he is encouraged by the fact that the current “leadership,” presumably the Biden regime, seems to be on board with maintaining unquestioning allegiance to the vaccine industry and its wares, he worries that not everyone is “on the same page.”

Penn is never shy about his love for vaccines, having appeared numerous times in the past to advocate for their becoming mandatory.

“This is one of those things that should be mandatory,” Penn declared in the past, comparing vaccine injections to a driver’s license that everyone should have to get in order to live.

“A resistance that’s just based on a certain kind of … lack of imagination and understanding of anything that’s helpful to the human race, I’ve become very frustrated by that,” he told Yahoo Entertainment last year.

“But I can only work within my own bounds and say that, for me, it should be mandatory.”

Penn’s latest statements came on the heels of a new scientific study revealing that the vast majority of people testing “positive” for covid and later dying from it are those who got injected with at least the first round of primary shots. Many of them were also “boosted” before they perished.

“We can no longer say this is a pandemic of the unvaccinated,” said Cynthia Cox, vice president of the Kaiser Family Foundation, following the release of the study.

Perhaps Penn missed the memo about this study before getting his face painted and appearing on entertainment “news.” Or perhaps he is simply a vaccine zealot who believes that all others should be forced at gunpoint to convert to his religion.

“Time to send actors that fly to war zones and pick up orphans and smuggle them back to California for ritual sex abuse to jail and the execution room,” one commenter wrote, referring to allegations that Penn and other actors are not-so-secret pedophiles.

“Angelina Jolie flew over there also to make an appearance, and Ben Stiller,” suggested another. “Loads of babies in the cargo hull of their corporate jets.”