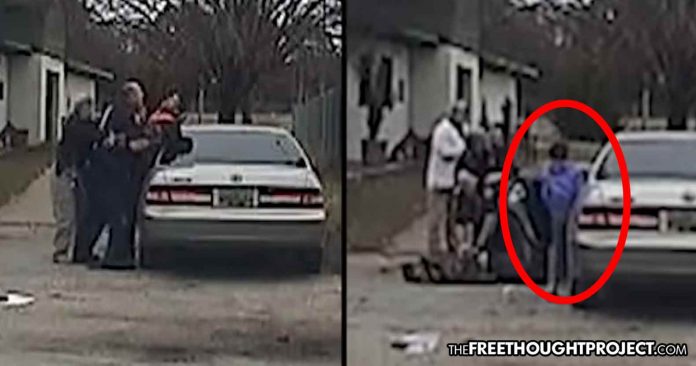 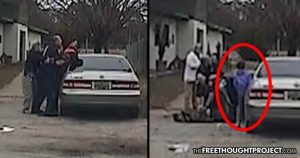 Dothan, AL – A 30-year-old father, Robert Earl Lawrence was shot and killed by police in front of his own children, after he attempted to do a good deed by turning a stray dog in at a local animal shelter. The horrifying dash cam video showing this otherwise entirely innocent father’s execution has just been released.

On Dec. 30, 2014, Lawrence and his three young children—all under 10-years-old—found a stray dog in the parking lot of a Walmart in Dothan, Alabama. After they put the dog in their car, the family drove to the Dothan Animal Shelter to attempt to save its life.

However, instead of accepting this good deed and taking the animal in without question, the workers at the shelter demanded that Lawrence show them his government issued ID.

Instead of giving them his ID, Lawrence showed them notarized and legal identification that was an affidavit instead of Motor Vehicle Administration ID card because he was a sovereign citizen. After being told that he couldn’t drop the dog without a state-issued driver’s license, Lawrence told the shelter that he would leave and bring the dog elsewhere.

As the dash cam shows, when police arrive, Lawrence was being polite and cordial and complying with the officer’s orders. However, it was the officer who grew belligerent and began making threats toward the father in front of his children.

As AL.com reports, a Dothan police officer stationed at the shelter followed him to his car and wouldn’t let him leave without producing a license. A couple months earlier, according to his cousin, Lawrence had begun to read about sovereign citizens, an anti-government movement that often includes, among other things, complicated arguments against the constitutionality of driver’s licenses. In short, Lawrence was ready to argue.

Having studied all the laws surrounding the sovereign citizen’s movement, Lawrence attempted to plead his case for not having to produce a driver’s license to the officer who wanted nothing of it.

Several minutes later, after multiple threats from the officer to Lawrence, the officer attempted to kidnap the man for trying to plead his case as to why he didn’t think he required a driver’s license.

Remember, Lawrence had caused harm to no one. He had not stolen anything, broken any laws, or otherwise done anything to warrant the presence of police. He and his children were simply trying to rescue a dog.

As police tried to take Lawrence into custody, a struggle ensued as Lawrence—knowing he had caused no harm and hurt no one—did not want to be kidnapped.

Moments later, as AL.com reports, Sgt. Adrianne Woodruff reached her arm through a melee, between the arms of two officers tugging at Lawrence, to press the barrel of her service weapon into in his gut and, without warning or utterance, pulled the trigger.

Lawrence was unarmed and was not hitting or otherwise attempting to harm the officers. He was simply defending himself by pulling away. At one point, as shown in the video, as the officer was using the taser like a cattle prod on the innocent father, Lawrence grabbed his hand and tried to pull it away.

This pulling away of the taser was used to justify Sgt. Woodruff in the murder of Lawrence as they claimed he was an armed threat. Woodruff never received so much as a slap on the wrist for killing Lawrence that day and has fought for immunity in a civil case.

Now, however, a judge disagreed that Woodruff is entitled to immunity and has ruled that a lawsuit can move forward.

“It is undisputed that Woodruff gave no warning before shooting Lawrence,” wrote the magistrate last month. “A jury could conclude that Lawrence did not pose a serious threat of harm to the officers to warrant the use of deadly force by Woodruff.”

For not having a driver’s license to rescue a dog, Robert Earl Lawrence would be killed by police. His children would watch with their own eyes as their father died in front of them at the hands of those they thought were there to protect them.

As the lawsuit moves forward, it is highly likely that the taxpayers will be held liable for Lawrence’s death. However, no amount of money will ever fix the PTSD and anguish his children suffer from every single day as a result of Woodruff pulling that trigger.

The first video shows the conversation between Lawrence and police and the officer initiate force.

This next video is the shooting and it is deeply disturbing. Viewer discretion is advised.

WATCH: Cop Runs Over a Child for Improper Light on His Bicycle, Gets Swarmed by Angry Neighbors