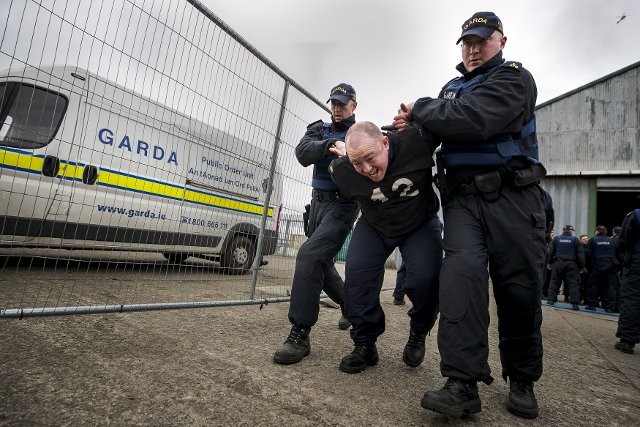 READ MORE AT THE ELECTRONIC INTIFADA

Ireland’s police forces have given unconvincing explanations about why they are cooperating with an Israeli ministry implicated in torture and war crimes.

The involvement of Ireland’s two police forces in the project has angered campaigners and politicians from across the island. They have pointed out that the Israeli ministry oversees prisons where Palestinians are routinely abused and a police force active in settlements which violate international law.

An Garda Síochána, Ireland’s main police force, claimed that it is “important” to take part in Roxanne.

Participating in such projects “strengthen and enhance the capabilities” of Irish police to combat “serious and organized crime” and “threats against the security of the state,” a Garda spokesperson said.

“Roxanne is an EU-funded project targeting criminal networks,” the spokesperson added. “As with all EU projects, participants and partners must adhere to the highest ethical and research integrity principles.”

The Police Service of Northern Ireland has also received complaints over its participation in Roxanne.

Bobby Singleton, a representative of that force, said the project’s activities are supervised by an “independent ethics board.” The board provides “analysis and oversight of the legal, ethical and social issues associated with the project,” he said.

Singleton added that “concerns raised with us” over Roxanne have been shared with that board and the European Commission and “we understand these are currently being reviewed.”

Claims that the project must adhere to high ethical standards lack credibility given how Israel’s “public security” ministry is taking part.

That ministry itself and the Israeli police force which it oversees both have their headquarters located in occupied East Jerusalem.

The police force has a network of stations in the settlements that Israel has built in the occupied West Bank. Israel’s settlement activities constitute war crimes under the Fourth Geneva Convention.

The “border police” division of Israel’s force plays an active role in the demolition of Palestinian homes in East Jerusalem. It also accompanies Israeli soldiers on hundreds of raids throughout the West Bank every month, often targeting family homes and terrorizing children at night.

The police force has frequently used violence, too, against Palestinian citizens of Israel.

The Mossawa Center, a human rights group, has estimated that the force has killed nearly 50 Palestinian citizens of Israel since October 2000.

Furthermore, the public security ministry bears responsibility for Israel’s prisons. Palestinians detained in those prisons have been denied the right to social distancing during the COVID-19 pandemic.

Torture is rife in Israel’s prisons. Amnesty International has documented how four Palestinians died behind Israeli bars during 2019 allegedly because of torture or other ill-treatment.

Chris MacManus, a member of the European Parliament for the political party Sinn Féin, has called on both Irish forces to withdraw from Roxanne.

“My concern is the Israeli ministry of public security will utilize its participation in the project to further develop its own capabilities in this area,” he said. “An increase in the Israeli police’s capacity is likely to result in further surveillance of the civilian Palestinian population.”

Clare Daly, an independent member of the European Parliament for Dublin, argued that Ireland’s police are violating their own rules by cooperating with Israel in the Roxanne project.

She pointed out that the code of ethics applying to the Garda requires that it respect human rights. “Not alone is it outrageous and disgraceful, this collaboration with the [Israeli] ministry of public security by An Garda Síochána puts it in breach of international law, as it is cooperating with forces operational in illegal Israeli settlements,” Daly told The Electronic Intifada.

Last month, Michéal Martin, the taoiseach – Ireland’s prime minister – was asked about Roxanne at a discussion in the Oireachtas, Ireland’s parliament.

Martin tried to defend the Garda involvement in the project.

“The question is should the Israeli police force be a part of that European initiative,” he replied. “That is the more relevant question to ask, rather than saying that the Garda should not be a part of a European consortium that is working on advanced mechanisms to defeat organized crime.”

Fatin al-Tamimi, chair of the Ireland Palestine Solidarity Campaign, said “it should be unconscionable for the police force of a democratic state to engage in a joint project” with Israel’s public security ministry.

“It should be doubly so when that project will be used by Israel to adapt technology to better police a brutal military occupation, illegally colonize Indigenous peoples’ land, and to oppress, repress and imprison anyone who resists these injustices.”