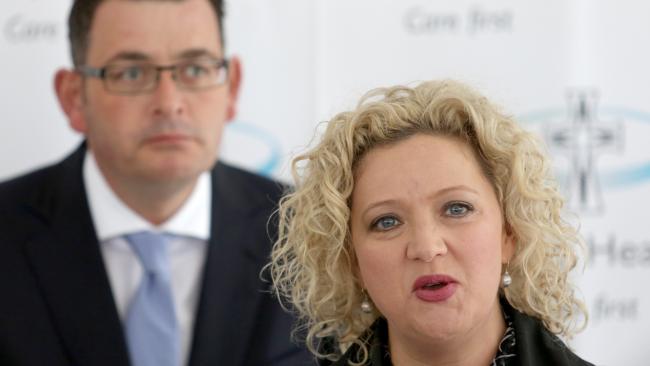 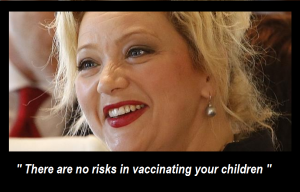 By now, most vaccine-choice advocates will be familiar with Victorian Health Minister Jill Hennessy.  It’s been difficult to miss the open hostility she fosters against those who question the safety and/or effectiveness of vaccines.  She represents a “brave” new breed of politician in Australia – one not shy about promoting bigotry against the small percentage of parents who have declined to,  or chosen to selectively vaccinate  their children, for one reason or another.

Vaccination-status bigotry is now the new black in Australia, and the Minister has embraced it wholeheartedly.  Staple marketing slogans such as ‘the science is clear’ – which are designed for no other purpose than to shut down all debate – roll effortlessly off her tongue.  So too, her flippant and callous denial of those citizens injured or killed by vaccines.  In an interview with Ten News she contemptuously claimed there are no risks arising from vaccination and described vaccine choice advocates as internet quacks or hippies.

That there are no risks from vaccination would come as a great surprise to AVN President Tasha David who also featured in the story, during which she explained how four of her six children had been injured by vaccines, yet the Minister would have us believe these must be a figment of her imagination.

One can only wonder how the Minister would rationalise away the $3.2 billion in compensation paid to date under the auspices of the US Vaccine Injury Compensation Program for significant vaccine injuries and deaths.

Vaccine choice advocates have come to expect these types of false claims and personal attacks from medical groups such as the doctor’s union and miscellaneous paid online trolls, but surely we can and should expect a higher level of ethics and discourse from our elected leaders.

Who Is The Real Crackpot, Hennessy? You Are. 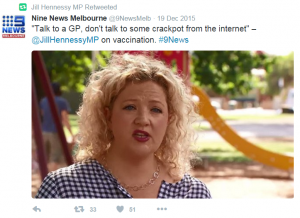 Is describing the small percentage of people who simply have questions about the safety and/or effectiveness of vaccines, as quacks, hippies or crackpots conduct befitting of the high office of Health Minister?  Why, No it is not.

Jill Hennessy, a minister in the Andrews government, was elected on a pro-choice platform in 2014, but as we have come to expect from politicians on both sides of the political fence,  it didn’t take long – once elected – before she did a complete back-flip in announcing No Jab No Play which came into force on January 01 along with the Commonwealth’s No Jab No Pay.

Although the ALP did indicate during the election campaign its intention to increase vaccination rates, it did so on the clear basis that a right to conscientiously object to vaccination was included in the deal.  Evidence of this can be seen on Page 41 of the Victorian ALP’s 2014 policy platform which states:

Labor believes that is the responsibility of parents to ensure their children’s immunisations are up to date so that their own children, and all children in the community, are protected from preventable infectious diseases. Labor will:

Change the law to require children to be fully immunised before they can enrol in childcare or kindergarten, in an attempt to boost vaccination rates across the community. Children who are not fully immunised will not be able to enrol unless they have an approved exemption for a medical reason or their parents have a conscientious objection. To receive this exemption, parents must receive counselling from a medical practitioner and state they have been advised of the risks of not immunising their child


Merely nine months into the government’s term, this commitment to include provision for belief exemptions was dumped by the Minister in favour of a near blanket ban on enrolment of unvaccinated children in childcare and kindergartens in Victoria.

In nine short months, conscientious objection to vaccination went from being an entirely legitimate reason to decline vaccination, to a totally illegitimate one only exercised by hippies and quacks!

The Whooping Cough cocooning programme was originally conceived on the basis that the greatest burden of Whooping Cough morbidity and mortality falls on infants too young to be vaccinated, and that by vaccinating the parents of newborns (or other close contacts) against the disease, this group will be less likely to suffer Whooping Cough in the critical neonatal period and up to six months of age.  The cocooning programme also recognises the long-standing consensus of public health experts that widespread use of the acellular Pertussis vaccine under the National Immunisation Programme has failed to control the disease in Australia, or any other country which uses the vaccine for that matter.

Even though the cocooning programme has been widely used throughout Australia at different times in recent years, it’s important to note that its implementation was only ever on the speculative basis that it may help provide protection to newborns during Whooping Cough epidemics.  There has never been any solid empirical evidence informing its use.

The cocooning strategy was funded in Victoria until 2012 even though it has never been funded through the National Immunisation Programme (NIP).  It was abandoned by all states at that time, including Victoria, following the negative findings of the Pharmaceutical Benefits Advisory Committee (PBAC) which had considered an application for funding of cocooning vaccines under the NIP in November 2011.

The PBAC therefore rejected the submission on the basis of uncertain clinical effectiveness of the cocooning strategy and likely high and highly uncertain cost effectiveness.

A recently published, large Australian study has again confirmed that the cocooning strategy does not protect infants from Whooping Cough.  There was no difference in the incidence of Whooping Cough among infants whose parents were both vaccinated postpartum compared to those with unvaccinated parents.  Similarly, when assessed independently, maternal postpartum vaccination was not protective.

So here we have clear evidence of the Minister wasting taxpayer’s funds on a non-evidence-based programme for the purpose of political expediency.  For this and the other reasons outlined above Jill Hennessy must resign immediately.  She is not a fit and proper person to hold high office.

5 thoughts on “Why Victorian Health Minister Jill Hennessy must resign”