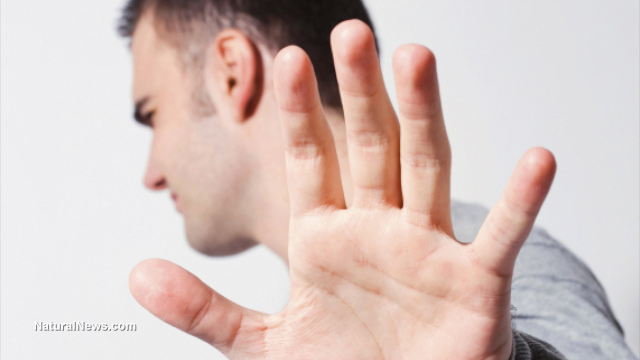 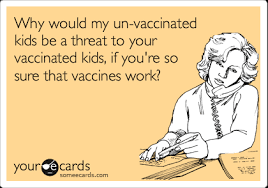 Why you can fuck off when you say I NEED to vaccinate my children….

Below are not my words, they are words of a friend, I have been given permission to use them. I am not going to be bullied any longer. I am not going to put up with “well, my child is fully vaccinated and fine.” Because I am not fine and I refuse to put my children at risk because your child is fine. What you need to know is my children are more than fine, they are healthy with no autoimmune disease, no celiac disease, no food allergies, no eczema, no learning disabilities. I am not willing to risk their health or well being because you think I should to “protect” your child. I don’t tell anyone to not vaccinate, I simply tell them to read an insert, and educate yourself about vaccines. If vaccines are so great they wouldn’t need to be made mandatory. If there weren’t hundreds of thousands vaccine injured people out there we wouldn’t be fighting for the right to choose…..

Every person I’ve met that questions vaccine safety was once pro vaccine until themselves or someone they loved became vaccine injured. Vaccines are not safe, vaccines did not save us from disease, indoor plumbing and clean water did. If you look at the history of vaccines you will see that.
Also….It pisses me off that vaccine injury is not talked about. There are so many of us, young and old, injured by a vaccine yet everyone turns their head. Well guess what, I am angry, vaccines have killed and disabled so many and we must talk about it. You can say you love science but if you discount vaccine injury and all the adverse effects you don’t know science. Science proves vaccines harm. Science proves vaccines don’t work(because booster after booster). Science proves vaccines didn’t save us from disease….. Read a fucking medical journal….read the science, do not rely on mainstream news.

Vaccines are not scientific, because there has never been – I repeat, NEVER – been a published study that used an unvaccinated controlled/placebo group, to demonstrate the long-term efficacy, and long-term safety of any vaccine used in the U.S. Not one controlled study in any scientific journal evaluating the long-term benefits and risks vs. dangers of vaccination vs. unvaccinated (Dr. Hugh Fudenberg, M.D. world-leading in Immunogenetics, speech at the NVIC International Vaccine Conference, Arlington Virginia, Sept. 1997.

Also, there has been no long-term study done on the safety of multiple vaccines given at the same time, or the carcinogenic and reproductive complications that may occur. Thus, no doctor or other health professional can honestly tell you your baby will be safe and there is no future cancer risk.

For those of you who remember science class, the use of a control (untreated or “placebo”) group to test results was considered fundamental in producing scientific findings. This bizarre absence of scientific method in vaccine studies tells you something vaccine industry integrity.

I ask you to show me one, just ONE, scientific study on any routine childhood vaccination showing that vaccinated kids are better off in the long-term than unvaccinated kids. You have to read all the raw data on the study and make sure that the control group is actually unvaccinated and the “placebo” they are using isn’t just another vaccine, or a vaccine that has just had the somewhat safe antigen removed and all the poisonous, toxic ingredients left in.

The one and only published comparison (non-controlled) study I have found comparing vaccinated kids to unvaccinated kids, was one in 2008 which showed that infants who were vaccinated with the Hepatitis B vaccine with Thimerosal (Thimerosal is 50% Mercury by weight) had nine times higher rate of developmental disabilities than unvaccinated children (The Journal of Toxicological and Environmental Chemistry, Sept. 2008 entitled Hepatitis B triple series vaccine and developmental disability in U.S. children aged 1 to 9 years by Gallagher and Goodman.).

Our society celebrates the historical conquests of vaccines over disease. However, the data shows this celebration may not be deserved. National Morbidity Reports, from the U.S. Public Health Reports, show the rise and fall of deaths related to disease epidemics. In most cases, the death rate was decreasing significantly before vaccines were even introduced.

This natural downward trend is also shown in the Metropolitan Life Insurance Company’s actuarial tables (that have no financial bias), showing the death rate among children from diphtheria, measles, and whooping cough had already decreased 95% from 1911 to 1945 from actual “natural herd immunity” at work – before the mass immunization programs started in the United States. This decrease was mainly due to less crowding and improved hygiene. Amazingly, it appears that most, if not all, of the diseases, for which we commonly vaccinate, would have largely disappeared without any vaccines, just as other diseases have done all through history. (The documentation that settles this question on the relevance of the vaccines in the natural decline of diseases, with graphs showing the degree of disease decline and the years when vaccines were introduced, is found in International Mortality Statistics Facts on File, pp. 163-189, 313, Michael Anderson, inc ISBN o-87196-514-3 and U.S. Dept. of Comm. Historical Statistics of the U.S., Part 1 Bureau of Census 1975.)

Not only is the efficiency of vaccines in question, but there is evidence that they can actually cause disease. For example, the first polio vaccination campaign was launched in April 1955, and immediately 70,000 school children became ill, 56 contracted polio, many became paralyzed, and many died from the vaccine. (The relevance of smallpox vaccine to the actual eradication of smallpox on the planet is also quite controversial, and I’m sure you will find the details of the study quite interesting, though quite extensive. Suffice it to say, the story of the smallpox vaccine is a long complex story, so I will simply refer you to my references, particularly the smallpox section of “The Vaccine Safety Manual”, pages 27-46 by Neil Miller. It is excellent. Don’t just go to the CDC website where they admit to no real problem with any vaccine. The actual facts and studies on smallpox are quite amazing and largely unknown. Do some reading if you are curious.)

So if you feel the need to tell me my children are putting your children at risk for a disease they don’t have you can fuck off. My children will not receive toxic chemicals so you can feel like your child is protected. My children are protected, their immune systems are strong. If I’m not worried about my unvaccinated family you shouldn’t be either. Chances are your children are around unvaccinated children and adults every day. If you haven’t caught up on your boosters for all vaccines on the 2017 schedule you are considered unvaccinated. Those vaccines you received as a child are no longer “protecting” you. Here is the adult schedule. I just think you should know EXACTLY what you are injecting and the adverse effects of the toxins.

This breakdown of the ingredients in the dtap is one of my favorites…
Why a life with brain damage or neuropathy(yes, it’s a common adverse effect from the MMR that your doctor fails to mention and a 1 year old can’t tell you they feel it) is not better than a week with the measles
A list of all vaccine ingredients, do you actually know what’s in all those vaccines?
If you care to see personal stories of the vaccine injured
And you can’t get tetanus from a rusty nail or a cut from a kitchen knife or a cat scratch and even if you did the vaccine is useless, you would need TiG shot.
Measles wasn’t scary before the vaccine was a money maker, it’s still not scary unless you watch the news that is controlled by vaccine share holders.
Some more reading material

I’ve done my research, I didn’t listen to anyone “famous”, I didn’t get my info from google(i started this journey long before google). I am making an informed decision for my family, this freedom should not be taken away. Whether you vaccinate or don’t should be a choice, to take that choice away is medical tyranny. So if you vaccinate you should still protest mandatory anything….think about it….where there is a risk there needs to be a choice.

Let’s not forget the Cutter Incident with measles, mumps and pertussis making a comeback, could it be from the vaccines?

P.S. If your comment was hurtful towards my children, I did not publish it. If you commented again bullying me, I will not publish it. I published all comments that were not threatening or wishing death of my kids. I respect the opposing view but being vaccine injured myself, the disrespectful comments will just be deleted. My blog, my choice, just like my body, my choice…….

oh, and if you discount my intelligence because I use the word FUCK, bless your heart….