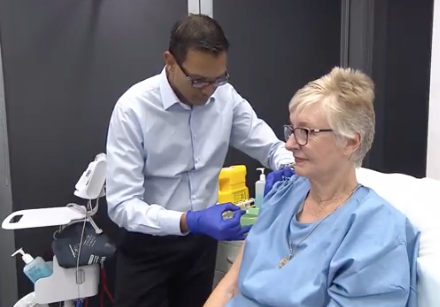 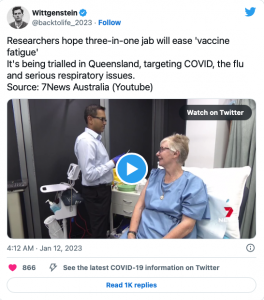 DUMB ZOMBIES WILL BE LINING UP FOR SOME LEAD IN THE HEAD SOON!!

Of course they found a boomer. And they had to pay her to go on a cruise.

Anyway, so few people are taking vaccines now that they’re trying to find ways to shove all their gene therapy goop into one vaccine so it doesn’t sound so scary. I guess if you’re going to fight “the Kraken” you need Batwoman, Rey and a pregnant Joker on your side or something:

The University of the Sunshine Coast is hosting the clinical trial which seeks to incorporate Covid, RSV and influenza protection into a single Moderna jab.

Doctor Nischal Sahai told 9NEWS that the trial will ascertain whether all three vaccines can work together.

“The aim is to see whether a combination vaccine will be as tolerable as giving all three vaccines separately,” he said.

Experts hope the three in one vaccination will help to take some of the pressure off an overwhelmed healthcare system.

The healthcare system is overwhelmed because the all cause death rate has spiked since the introduction of the vaccine. The death rate did not increase in 2020 even when the flu was killing all the fatties. It’s only been since the vaccine was forced on people.

Multiple studies are being published now confirming the link between the vaccine, adverse reactions such as heart attacks, and death.

Even members of the elite are speaking out against it, while the Regime pretends that purebloods are terrorists.

The new vaccine will ensure only one jab and a follow up booster will be required for adequate protection rather than multiple jabs and boosters.

Researchers are now seeking out more volunteers to participate in the clinical trials, including anyone between the ages of 50 and 75-years-old.

The clinical trials are expected to take several years before an approved vaccine is officially rolled out.

Fancy that, taking several years to approve a vaccine rather than rushing it through, breaking every medical and scientific rule in the process and silencing and demonising any doctor or scientist who call you out for it.

Basically, they can’t even pay people to take their green slime anymore because nobody wants it.

From my own observations, the people who took the jab are getting angrier and angrier at those of us who refused. The common theme I see in their “arguments” is that they think our financial, career and personal sacrifices were made because we could afford to make them, while they could not.

This is a cope.

We couldn’t afford to fall of a financial cliff but we did it anyway. We were simply more resourceful and more resilient, ie we were braver. We’re watching the lashings out of cowards.

Unvaxxed and nationalist “extremists” are playing the long game. We understand that the Regime is trying to replace us demographically and to force us into digital prisons where we would subsist on bugs, so we are establishing networks in order to survive independently of the system and outlast it.

The pureblood in our veins and our rejection of the degenerate “culture” of clownworld all but assures our demographic superiority. We can outbreed the mudbloods.

Cowards on the other hand are a completely different breed. They have less self control and are more short-term oriented. When they get angry they are likely to lash out and do something stupid. It’s the people who got vaccinated, and/or who vaccinated their kids, have no connection to a support network of so-called “extremists” and feel like they have nothing left to lose who are the ones to watch.

Unfortunately we cannot reach them.

One thought on “3-in-1 Vaccine to Combat THE KRAKEN: Nobody Cares”