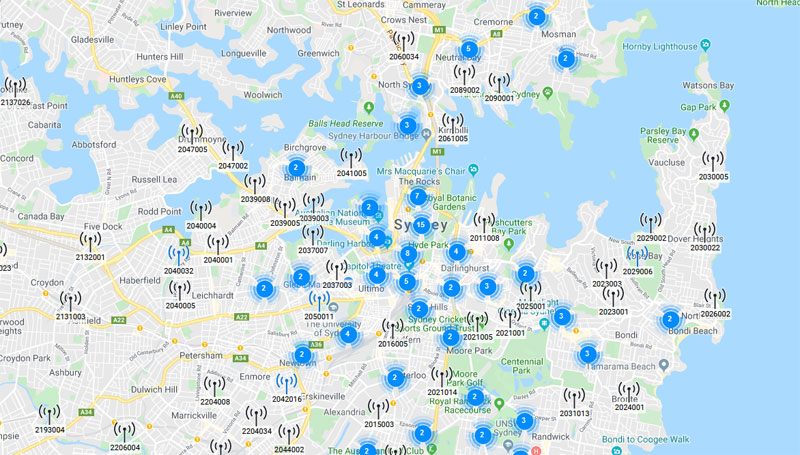 The rollout of 5G is well underway with antennas now saturating most populated parts of the country. It’s only a matter of time until this higher frequency 5G radiation is literally everywhere.

No choice. No opt-out. No one exempt – even for the most vulnerable among us (animals, insects and children).

A quick look at the RFNSA shows 200 5G sites within just an 11 km radius of the Sydney CBD. Some of these sites are already installed with others undergoing the ‘5G upgrade’ within the next few months.

At this current time, the 5G infrastructure will be using the 3.4 – 3.6 GHzfrequencies with a wave length of around 8.3cm. Not quite a millimeter wave but still higher than the common WiFi frequency of 2.4 GHz.

It’s worth knowing that the higher the frequency:

With a lot of alarm online about higher frequencies being planned, what will the future hold?

Let’s start by looking at the current 5G transmitters being installed in Australia. The most common we are seeing are the Ericsson AIR 6488 and AIR 6468.

A quick look at their operational manuals shows that these transmitters are not capable of going higher than 3.6 GHz.

As you’re now aware, these lower frequencies allow the signal to still travel some distance with the ability to penetrate solid objects (to some degree).

The concern with the use of higher frequencies (10+ GHz) is more transmitters will be required – much closer together. This will mean even higher radiation exposures to more people at the expense for more bandwidth.

Is this the plan though? Not currently and it’ll be an extremely costly venturerequiring hundreds of thousands more 5G small cells to be installed. There are no current plans for this in Australia… for now.

You also run into issues at these higher frequencies where the signal can be easily blocked by solid objects. This causes connectivity issues and unhappy customers.

What’s stopping them from upping the power output though? With public exposure limits set so high, they have a lot of room to play with.

Higher power output = higher microwave radiation exposure. Or.. ‘EME’ (electromagnetic energy) as the government and telcos have started calling it. A nice and friendly marketable name.. so as to not ‘scare’ anyone!

The reality of virtually all wireless technology, it’s microwave radiation (300 MHz – 300 GHz). We’ve known very well since the 1940s of the harm it can cause. That’s why you’ll always see microwave ovens with a shield in the glass door (most of which work very poorly).

The biggest concern of 5G

Most people have been fixated on 5Gs use of higher frequencies – millimeter waves. However this is not the biggest concern of 5G.

As an electromagnetic radiation testing technician I’m just as concerned or even more so of the lower 4G frequencies (800 MHz for example). This radiation can penetrate much deeper into the body than say a 3.6 GHz (or higher) frequency.

So what is the biggest concern if it’s not the frequency?

It’s the power flux density – that is the strength of microwave radiation coming off the transmitter / antenna.

Most importantly, 5G is adding another layer of radiation exposure on top of the already existing 4G and 3G infrastructure. Plus don’t forget all the other microwave radiation exposures we encounter daily (wifi, phones etc).

The table above shows the radiation exposures before and after 5G being installed at a site in Sydney. Check the power density columns for before (green) and after (purple) the 5G upgrade.

That’s a fairly substantial increase in microwave radiation, yet no one is talking about this. Everyone is looking in the other direction at the possibility of 5G using much ‘higher frequencies’. The possibility..

Something to note also is the % of public exposure limit in the table. That is based on when the radiation starts to burn you not when it causes adverse health effects. Biological effects begin at much lower levels (see bioinitiative report).

Even at half a km from the above base station site you’ll be exposed to around 20,000 uW/m2. We already know that adverse biological effects begin from just 3.4 uW/m2.

There’s also ongoing research into health effects occurring at much lower levels than even 1 uW/m2.

Millimeter waves are in use everywhere

Fact is millimeter waves are in use everywhere and are nothing new. Something that no one is talking about in the 5G discussion.

Police radar guns for example use a frequency of around 35 GHz.

Even many of the existing telecommunication base station sites use parabolic antennas. These transmit and receive microwaves using mm waves higher than 50 GHz.

Again what’s most important is the strength of the radiation – how much power it has.

Are you contributing to the problem?

Let’s hope not.. but if you’re using your mobile phone for anything other than calling / sms then you are.

The massive increase of cell phone towers and transmitters is thanks to people demanding more and more data.

The most demanding on the infrastructure being the streaming of videos or movies on your phone. This is driving the telecommunication companies to install microwave radiation transmitters almost everywhere.

The more towers that go up, the more microwave radiation everyone is being exposed to. Each and every year the radiation we’re exposed to is creeping up and up – higher than ever before.

The solution? Turn your data off and use a computer for the internet with a wired connection to your modem. Don’t forget to turn WiFi off on both the computer and modem.

Mobile phones also expose you to radiation levels higher than 200,000 uW/m2 – that’s a lot! Use airplane mode as much as you can, especially if carried on the body.

How to protect yourself from 5G radiation

Firstly, eliminate all non essential wireless devices in the home. Use wired alternatives.

As far as protection from 5G (and 4G.. etc) the best options are:

Forget the charms, stickers, plug-ins and stones – you are wasting your money. We use the world best EMR detection equipment from Germany and can very quickly show the high levels of radiation still hitting you with such products.

Keep in mind that shielding requires someone qualified in EMR to help you. Before even considering shielding a room an EMF assessment of your home is required to know where the radiation is coming from and the levels.

Commonly we see people wanting to shield without even knowing the exposure levels and sources of EMR – this can be quite dangerous and lead to higher exposures.

We also regularly see clients concerned about 5G but after we assess their home we find something completely different that is much more concerning for us. As an example, strong magnetic fields extending off their walls and flooring from wiring errors or stray currents.