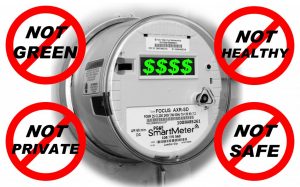 All throughout the USA—plus globally—informed and concerned citizens are refusing AMI smart meters for electric, natural gas, and municipal water utility services, which are provided using a Marxist-draconian-like edict and rollout by utility companies that want to cash in on the funding they can receive from the feds to institute what amounts to an apparent ‘first leg’ push for the global smart grid and Internet of Things (IoT) [1].

The IoT is designed to track everyone’s every interaction at all times—in your car (transponders and E-Z Pass); on your computers—specifically Windows 10 backdoors that apparently allow the feds access to your computer; through your ‘smart’ home appliances—especially TVs [2]; plus a human RFID microchip [3] surgically imbedded somewhere inside your body to enforce a cashless society, tracking, and an obvious ultimate control mechanism over every human!  That IoT sure beats what Karl Marx, Adolph Hitler, and Joseph Stalin visualized and enforced!  Why aren’t consumers waking up to what’s being done to us?

Furthermore, does the Draco-like (7th-century Athenian statesman and lawmaker, or his code of laws, which prescribed death for almost every offence [7]) push for vaccines starting as soon as a fetus exits the womb until one reaches advanced old age play a part in any of this, especially vaccine nanoparticles? [4, 5, 6]

However, one specific aspect of the dumb ‘smart’ technology came into daylight recently because of what’s been going on in Seattle, Washington—terrorism associated with hacking smart systems.  Hopefully, that aspect finally will register enough concern in the hearts, minds, and souls of humans to enable us to recognize, and seriously ponder, that we are being downsized into zombies or human robots!

The issue that’s raised security concerns, plus hackles, at corporate levels is the fact that utility companies’ smart meter technology is being equated with terroristic capabilities!  Read that again and let it sink into the very depths of your being.

All those dumb ‘smart’ gadgets we can’t live without, and everyone has bought into, pose severe capabilities for terrorists’ hacking, plus a total takeover of the grid! How do you like ‘them’ apples?

The quintessential Pandora’s Box is nothing compared with smart technology and its capabilities of being hacked at every level of communication.  How do we know that?  Well, it’s been revealed that when Seattle City Light, a public power utility in Washington State, was asked by an activist for their smart meter and grid details, etc., in order to find out what kind of safety and security safeguards were built in by smart meter suppliers Landis+Gyr and Sensus USA, that request wound up in a rather bizarre legal battle!  Why?

Here’s the story of activist Phil Mocek’s request for smart meter information that ran into legal troubles.  However, I’d like to cut to what may be the real deal about not releasing those plans, etc.:

[T]he smart meter suppliers objected to the release of the information on the grounds that the unredacted documents would disclose their trade secrets and open the public to terrorist attacks on their infrastructure. [8]  [CJF emphasis added]

As a result of smart meter suppliers/manufacturers legal actions, this is where the issue currently stands:

Mocek was given a mix of unredacted and redacted documents by the city, the meter makers complained, whereas he should only have received and published files they had censored. Seattle officials said they were not skilled enough to know for sure which parts to redact, so left it to the suppliers to edit the files – yet, unredacted information managed to make its way into Mocek’s hands and onto the internet. [CJF emphasis]

Landis+Gyr and Sensus promptly sued the city, Mocek and Muckrock, and filed for an injunction: ultimately, the suppliers wanted the documents taken down, and the unredacted copies banned from public view.

On Thursday, a temporary restraining order was granted by the King County Superior Court in Washington – and Muckrock founder Michael Morisy confirmed the unredacted documents have been taken down pending the outcome of the case. [9]

However, there seems to be some element of naivety involved regarding all this, I offer, and the following leads me to that conclusion:

In the meantime, however, Mocek also has some additional problems to deal with, thanks to the legal wrangling. Though he has filed similar information requests in the past, he says he has never had to face a lawsuit simply because he wanted to look at public records and keep a local utility honest.

“I don’t think [Seattle City Light] are going to put a device on my house to spy on me,” he quipped. “I think they are being bamboozled by vendors who want to make a lot of money by replacing thousands of meters.” [9]

To which I offer:  I think Mr. Mocek and everyone else needs to reconsider the “spy on me” aspect. How naïve are we, if we don’t put two and two together and come up with the correct answer?  Utility companies are providing customers’ smart meter information to others, as a California utility admits:

This data is very valuable because it can reveal patterns about what you do and when.  California utility companies admitted  they are providing smart meter data to the government and third parties.  [10]

There’s a 4.3 minute video explaining what smart meters really can and do, regarding surveillance of customers’ homes in this website.  It’s found under “Privacy invasion.”  However, I need to tell readers that my computer surveillance package won’t allow me to copy and paste that video URL into this article!  Interesting?  No—my computer is compromised as, apparently, all computers are of those who do the type of work I do.

If the Smart Grid is that “stupid”, then there must be some ulterior Faustian reason for it to be mandated and installed, wouldn’t you say?  No one can be that damn dumb to mandate a system that can cause more harm, especially in the area of personal privacy and national security.  Haven’t we learned anything from nine-eleven?

You no doubt have heard about people who live in glass houses and their vulnerabilities.  Well, your house, no matter what it’s made of, will become a crystal clear, see-through structure to all who want to know about your every moment, movement, occupancy times, and use of smart gadgets and, in turn, broadcast that information via hackable cell phone technology in smart meters and, ultimately, sell that personal information without your knowledge and permission to third parties; plus open your privacy, life, and home to burglars, thieves, and government or foreign hackers.

Is that the price we are willing to pay for buying into all the dumb smart technology being forced upon us?

I think every U.S. homeowner should file a formal complaint with their utility company and state public utility commission informing them that they must obtain an official court order in order to be able to access your personal information via a smart meter.  Basically, it’s a surveillance device!  There’s something called the U.S. Constitution and also each state has a constitution.  Enforce your constitutional rights!