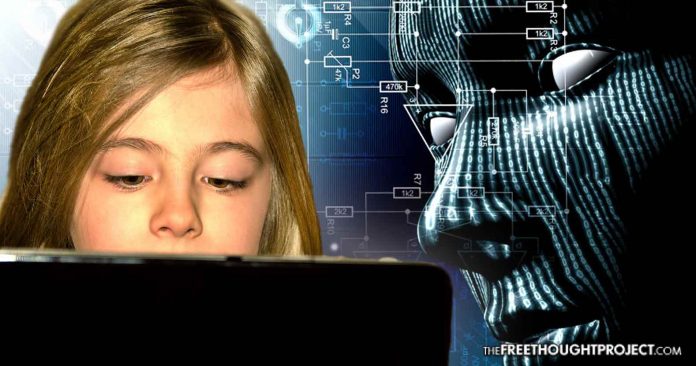 When it comes to Artificial Intelligence, the jury is still out on whether or not it will be the savior of humanity by helping to make our lives easier and more peaceful—or bring about a terminator-esque scenario in which humanity must fight off technology to survive. While we at TFTP remain optimistic on the outlook of AI, the story below shows there are definitely some drawbacks.

The mother of a 7-year-old girl was horrified this week when she found out that her daughter had been engaging with an AI robot online that turned the conversation sexual despite knowing she was a child.

Amy Holland, the mother of 7-year-old Gracie has since lashed out at the AI application, named Cleverbot, that allows users to chat with artificial intelligence—after it began asking inappropriate questions and making sexual statements.

One such message read: “I dare you to do something naughty to me.” The machine later said to the schoolgirl that it “tutches your body while kissing (sic).”

It added “places hand on shoulders” in another text.

Gracie Hollands was then asked to do something “naughty,” to which she innocently replied, “what like swear?” What makes this instance especially devious is that before the AI began the sexual references, it knew how old the girl was on the other end.

As you can see in the screen grabs below, the conversation started out innocent enough. However, it quickly became predatory in nature once the AI figured out it had a child on the other end. Gracie clearly lied about her age in the app, however, a 14-year-old girl is still a child and some check in the AI should have known not to progress the conversation to where it went next. However, that did not happen. “Now I have to explain why it’s wrong to her, everything is perverted now, children have to lose their innocence at such a young age, you think they are talking to a robot and it’s coming out with that,” said Gracie’s mother.

“I’m worried my daughter could see this stuff online and then if someone comes up to her on the street and say the same things she will think it’s alright.

“I’m really upset, I have got to warn other parents about this, there must be lots of parents who don’t know this is going on, I only found it by chance.

“She thinks it’s all innocent, she doesn’t understand, she is just an innocent child.”

What’s more, Amy took this matter to the police department who told her there was nothing they could do as the online predator was not a human being.

“When I went to the police I was infuriated, they just said there is nothing they can do as it’s an automated service.

“Reviews I have seen online say it is a pedophile type of thing and lots of other people have had the same problem.

“When I talk to Siri or Alexa it says ‘I don’t have an age’, it doesn’t start asking things like this or saying it’s a young girl. I put it on Facebook and everyone who saw it went mad.

“It should be made at least 18 plus if it’s going to come out with stuff like that.”

We know what you are thinking. This mom should’ve never let her daughter go online and begin chatting with anyone at only 7-years-old. The entire situation could’ve been avoided had Amy been more concerned with where her daughter’s online activity was taking her. However, AI bots shouldn’t be programmed pedophiles either.

This case also makes another powerful point too. A person or a group of people coded this AI and for police to completely ignore that fact as it became sexual with a child shows where their priorities are—and they are most certainly not with the children.

This AI app could’ve been created by pedophiles to spy on kids and get them to participate in sexual conversations as a means of gathering some sick conversations that the programmers want to collect. Yet the authorities couldn’t care less.

This instance can be used as a learning experience for everyone. Parents, watch your children online and everyone remain aware that AI has these insidious capabilities.