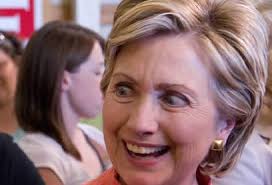 I am like everyone else… When that fraud FBI official James Comey, “cleared” psychotic demonic  “Killary” Hillary Clinton of her “email scandals” that were most definitely treasonous acts against the American republic, I was shocked… But nothing has surprised me anymore, for the American democratic system is and has been broken now for years…. It is a dismal failure and has turned America into the laughing stock of the entire planet…. I am also shocked that the dumb ass American people are sleepwalking through their lives thinking that they live in a “free” society!
I have been keeping on top of all the follow up reports after that fraud James Comey came down with his “decision” on not to prosecute “Killary” Clinton yesterday, and everyone has been saying the same thing.. This is a travesty of justice, and it is so obvious that “Killary” is being propped up by the Jewish banking criminals and the “oligarchy” that now runs and controls that once free nation… And for now, I want to present a great video that summarizes how “Killary” is being pushed by the criminal Oligarchy for their next President of the United States and how that same Oligarchy has officially killed the American republic… Here is that video for everyone to see for themselves right here… I have my own thoughts and comments to follow:

NTS Notes: I have, like most everyone that knows the real truth, been pushing for the American people to wake the hell up from their ridiculous slumber and hoping that the people will finally realize that their nation is not their own, and save their republic from its demise… But now it appears that the idea of the American nation as being free and the republic as a land of liberty and freedom is now dead…

Yes, “Killary” is and has already been anointed as the next US President… The criminal Jewish elite and the Oligarchy that runs that nation has made their selection and come November they will damn make sure that she wins that election no matter what… The only hope therefore for what is possibly left of the American republic is for the American people to vote OVERWHELMINGLY for anyone else other than this demonic psycho, and that means to risk the future of the republic on Donald Drumpf…..

I agree with the terrible facts that this video shows.. The “Oligarchy” that controls America is operating with impunity and cares NOT about the welfare of the American people or for any true justice… The American system of “justice” has turned into a terrible evil joke where there is one law for these ultra criminals that are in control and laughing in our faces, and everyone else that are nothing more than slaves, and “peons” which to me means “pee ons”……

I however refuse to call this criminal group the “New World Order” simply because the major players for world domination are indeed the criminal Jewish elite, and therefore the title should really be the “Jew World Order”….

So, America.. Your empress in waiting, Hillary “Killary” Clinton is now free to continue her evil diabolical crimes against humanity…. You will have this evil witch as your next President by hook or by crook, and you will suffer the consequences of your ignorance to stop these crimes…. The time to wake up and stop these “Oligarchs” is long gone, and the American republic is now DEAD!