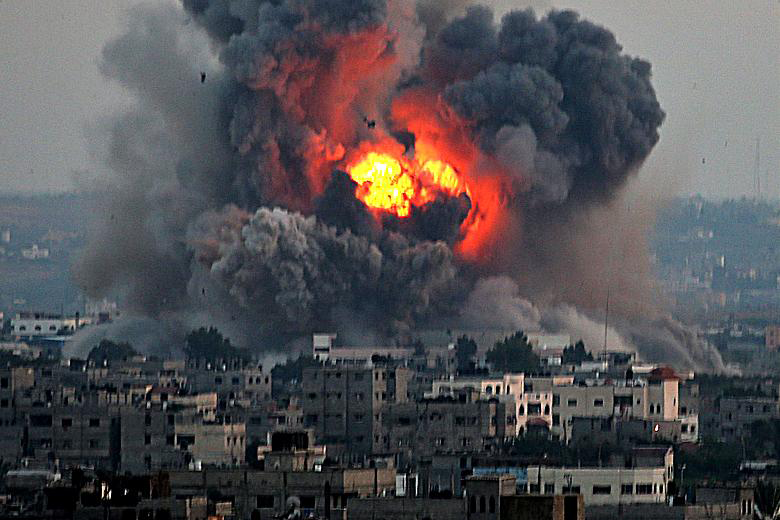 DON’T BE FOOLED by those who say the ongoing slaughter of Palestinians is the work of Zionists, not Jews: that there is a distinction between the two. This is NOT the case. The Gaza Genocide is very much business as usual for Yahweh—the deranged, psychotic, murderous god of the Jews.

A LESSON IN LUNACY from Pastor John Piper: “It is right for God to slaughter women and children any time he pleases.” How can an educated, well-meaning man talk like this? Clearly John has serious psychological problems, we can see it in his face. But this is how the parasitic mind-virus of monotheism works. It is all about CONTROL. Now, get on your knees.

THE HOLY BOOK of Judaism, the Torah, is a catalogue of wars, mass-murder and bloody revenge, with the Jewish god, Yahweh calling for savage genocide and slaughter on every other page. There are over 600 passages of explicit violence, 1000 descriptive verses of God’s own violent actions of punishment, and 100 passages where God expressly commands others to kill people. Bloody violence is the most often mentioned activity in the Hebrew Bible.

“Now go and attack Amalek, and utterly destroy all that they have,
and do not spare them. But kill both man and woman, infant and nursing
child, ox and sheep, camel and donkey.”—1 Samuel 15:3

The Torah is the ‘spiritual’ source-book that Jews grow up with, the foundation of their religion, their moral guide, the basis for their legal system. Small wonder then, that a culture so steeped in violence and death, is currently engaged in the horrifying genocide of the Palestinian people of Gaza.

Neither does Israel’s war machine flinch from using the most inhuman, lethal weaponry against civilians, in their psychopathic determination to completely annihilate the Gazans, showing ‘no mercy’ whatsoever. This carnage has Yahweh’s fingerprints all over it…

2014: An entire neighborhood in Gaza is razed to the ground by Israeli bombs and missiles

“When the Lord your God brings you into the land you are entering to possess and drives out before you many nations… then you must destroy them totally.Make no treaty with them and show them no mercy… do not leave alive anything that breathes. Completely destroy them… as the Lord your God has commanded you.”—Deuteronomy 7:1-2

FOR CENTURIES the Jews had been an itinerant people. Without a homeland they could not pose any overt political or military threat to anyone. The murderous Yahweh had been impatiently kicking his heels for millennia. This all changed in 1948, when the Jews were unwisely given a plot of land in Palestine. Now, for the first time the self-proclaimed “Chosen People” had a base. What would they do with it?

Well, with support from the USA, they had soon built up a formidable military force, (ultimately resulting in the Samson Option) and they immediately set about the annihilation of the Islamic population of Palestine, as the first step towards world domination. Yahweh was back in the saddle..!

An Israeli soldier prays to the biblical god of war and genocide before taking part in a murderous assault on Gaza.

THE TORAH is full of war and violence sanctioned by Yahweh. Warfare was part of everyday life for the Jews of the Old Testament, with Yahweh commanding Israel to go to war over and over. In Deuteronomy, his war commands for a city that does not accept Israel’s offer of peace and open its gates, is:

“When the Lord your God delivers it into your hand, put to the sword all the men in it… Do not leave anything that breathes.”—Deuteronomy 20 15:3

When the walls of Jericho fell, the Israelites “destroyed with the sword every living thing in it – men and women, young and old, cattle, sheep, and donkeys.” (Joshua 6:21).

Small children are pulled from the rubble of their home, destroyed by Israeli forces

TIME AFTER TIME after time the petulant, deranged ‘deity’ of the Jews unleashed death and destruction against anyone who rejected his authority, laying waste entire peoples (non-Jews):

“Anyone who is captured will be run through with a sword.  Their little children will be dashed to death right before their eyes… The attacking armies will shoot down the young people with arrows.  They will have no mercy on helpless babies and will show no compassion for the children.” (Isaiah 13:15-18 NLT)

“Two State Solution”? No way. Israel has NEVER had any intention of sharing Palestine

In the following passage, Yahweh is threatening Babylon, but he could just as easily be terrorizing the residents of modern-day Gaza:

“When I am finished, you will be nothing but a heap of rubble.  You will be desolate forever.  Even your stones will never again be used for building.  You will be completely wiped out,”  (Jeremiah 51:25-26

Likewise, when threatening Mount Seir: “I will fill your mountains with the dead. Your hills, your valleys, and your streams will be filled with people slaughtered by the sword.  I will make you desolate forever. Your cities will never be rebuilt.”  (Ezekiel 35:7-9 NLT)

The genocide being perpetrated in Palestine is not solely Zionist inspired. Zionism is relatively new on the scene. What we are witnessing is Judaism in action and, if it is allowed to take hold, the world will be dragged back into the Old Testament and the wrath of Yahweh will be visited upon all of us…

“The God of the Old Testament is arguably the most unpleasant character in all fiction: jealous and proud of it; a petty, unjust, unforgiving control-freak; a vindictive, bloodthirsty ethnic cleanser; a misogynistic, homophobic, racist, infanticidal, genocidal, filicidal, pestilential, megalomaniacal, sadomasochistic, capriciously malevolent bully.”― Richard Dawkins, The God Delusion

, a doctor in Shifa, Gaza, reported:

“I treated a ten-year-old boy. He had his whole chest filled with fragments from the bomb. On his lap was another person’s leg that had been cut off. We resuscitated him and did everything we could do to save his life but he died between our hands.”

In July/August 2006, doctors in the Gaza Strip reported unusual wounds caused by Israel Defense Forces attacks against Palestinian targets, claiming that they were from a previously unknown weapons. The U.S. Department of Health and Human Services study in 2005 found that tungsten powder shrapnel rapidly induces cancer.

, the deputy speaker of the Knesset, Israel’s parliament, has published a plan for the total destruction of the Palestinian people in Gaza.

His detailed plan, which calls for the use of concentration camps, amounts to direct and public incitement to genocide—a punishable crime under the Genocide Convention.

In a posting on his Facebook page, Feiglin, a member of Prime Minister Benjamin Netanyahu’s ruling Likud Party, calls for the “conquest of the entire Gaza Strip, and annihilation of all fighting forces and their supporters.”

“This is our country—our country exclusively,” he writes, “including Gaza.” | More

But, just a minute, maybe the solution to this problem has been staring us in the face all along. Maybe the cure for this curse that blights humanity is in the very place where the evil originated:

“Come, and let us cut them off from being a nation; that the name of Israel may be no more in remembrance.”—Psalms 83:4

6 thoughts on “The Gaza Genocide: Judaism at Work”