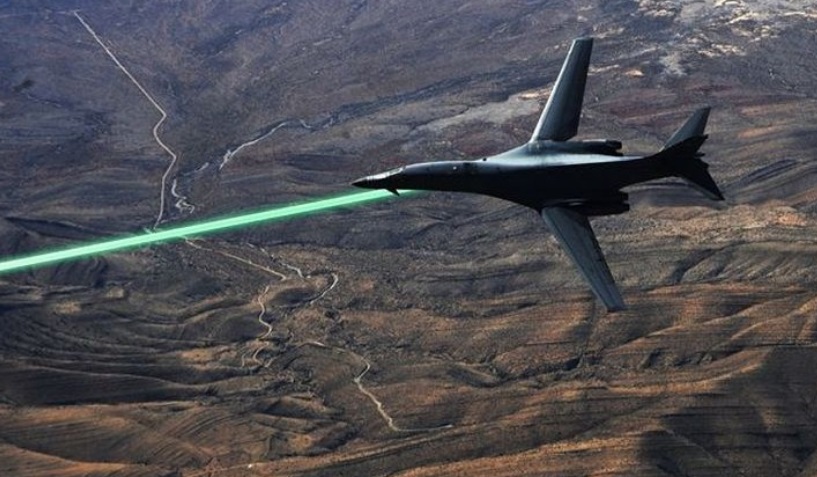 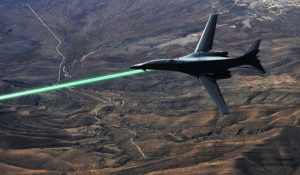 The internet is abuzz with analysis of the California fires, and some observers note that the videos and photos from the fire are showing a surprising number of anomalies that don’t seem possible to have occurred through “natural” fires. This article from ChemtrailPlanet.com offers a typical description of the strangeness now being observed with these fires:

The news tried to give the impression that the over 100 fires (in 2017) that occurred all at once were from a forest fire spreading into neighborhoods. Yet, most of the trees didn’t burn and there is no burnt path between houses that are next to or across from each other. Notice in the picture on the left how that there was no burnt path between the two buildings and how that though both buildings were surrounded by trees, none of the trees got burnt or even singed. It is plain to see from this picture that a fire didn’t go from one building to the other, but that they were both attacked from above or inside.

Many people believe the U.S. government is behind the fires, using “Direct Energy Weapons” (DEW) to target the area for destruction in a way that can be easily blamed on wildfires:

The evidence that the fires were a result of directed energy weapons (DEW), at least in part, is undeniably strong. There are also theories of smart meters or transformers blowing up being a cause. They might have contributed, (but that wouldn’t explain cars also being “toasted” with no burnt path between the house and the car), and the evidence that can be seen is that of directed energy weapons. It is not at all unfathomable that more than one weapon could have been used to ensure the desired effect.

CrazzFiles.com has also posted a collection of photos from the California fires that seem to show anomalous behavior. See some of those photos are posted here, including this first one that shows cars and trucks burned out, but nearby trees appear to still retain their leaves: 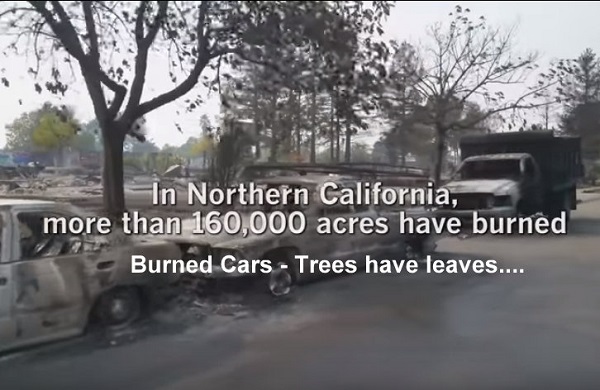 This next photo appears to show an entire neighborhood of houses that burned down, yet nearby trees were somehow spared. It isn’t known, however, when or where this photo was taken, so it’s difficult to attribute this to the recent California fires: 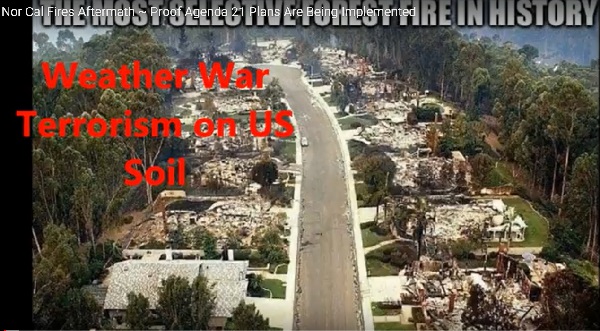 According to internet analysts, these Direct Energy Weapons are being used around the world to torch intended targets while being able to blame them on natural fires. The following photo was supposedly taken in Greece, and it appears to show an entire street of burned and melted automobiles, surrounded by trees on both sides of the road which were miraculously undamaged (and still have their leaves): 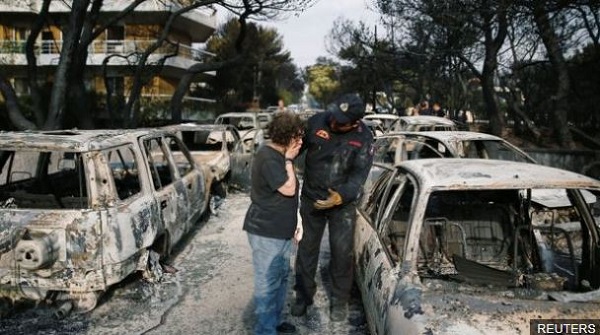 Here’s a video from John Knox that has since been banned on YouTube. A user posted it to Brighteon.com, so you can see it there. Watch the first 3 minutes to get a sense of what Knox is explaining:

If these fires are being artificially created, what would be the purpose in doing so?

Creating fires artificially is nothing new. It’s called “arson,” and there are a thousand different ways to carry it out. What’s being alleged with the California fires is the idea that arson is being initiated using energy weapons platforms mounted on aircraft.

We already know such systems exist, by the way. This isn’t some outlandish theory. The UK Daily Mail, for example, reported over a year ago that Russia had successfully mounted lasers on fighter jets that could burn through enemy missiles. “Russia says it will deploy powerful lasers on its new sixth-generation fighter jets to destroy enemy missiles,” reports the news publisher. “The news comes one month after the US army successfully hit an unmanned target using a high-powered laser mounted on a Apache AH-64 helicopter.”

In other words, laser systems are already being mounted in helicopters and jet fighters. And that’s publicly known. Imagine what kind of energy weapon systems are not yet being reported to the public, and imagine how large of a system could be mounted on a C-130 military cargo aircraft.

It’s not even really a question of whether such weapon systems exist, as that’s already been confirmed. The bigger question is why California would be targeted in such an attack and who benefits from the fires?

Some observers have compared the burning of California to the Biblical event of God destroying Sodom and Gomorrah. These two ancient cities were destroyed by “fire from the sky,” and the Bible explains this was done as punishment for the homosexual orgies carried out by those who lived there. Some people believe today that the California fires are also the result of God’s wrath for similar reasons, noting that the fires have burned out the luxurious homes of many Hollywood actors and producers who create sick, perverted films while promoting the transgender genital mutilation of children. (Related note: Twitter now openly promotes the genital mutilation of little girls and has begun banning anyone who speaks out against genital mutilation.)

Other observers say the fires have nothing to do with God’s wrath and are, instead, a United Nations military operation to depopulate the region in advance of it being seized by globalists. Humans must be forced into the cities, the thinking goes, and evacuated from rural areas that will be controlled by police state world governments. Setting rural areas on fire, some people believe, is the quickest way to convince people to leave (or kill them while they try to escape).

This explanation doesn’t add up, however, when you consider that many people whose homes were burned out are simply going to rebuild new homes in the exact same location after collecting insurance money. Unless residents are blocked from rebuilding, the “land seizure” explanation doesn’t really add up.

Leftists blame global warming for the fires, but their explanation makes no sense either

On the political Left, liberals blame global warming for the fires. They mindlessly call it “climate change” now, of course, and they imply that forests never burned anywhere on the planet before humans came along and started burning gasoline in combustion engines.

These very same people who claim that burning fossil fuels causes fires are still, by the way, burning up fossil fuels as they commute across Los Angeles and other California cities. As I point out in this Natural News article, if California’s fires are caused by combustion engines, then why are California residents still driving cars? Do they want more fires? Are they cruel?

The simplest explanation is that shrubs and grasses simply burn when ignited under the right conditions, but mature trees often survive forest fires

For these particular fires, I tend to go with Occam’s Razor: The simplest explanation is often the correct one. You don’t need exotic energy weapons systems or the wrath of God to set fire to Malibu. All you need is the right conditions (dryness, winds, lots of plant fuel) and a single spark. The laws of physics take care of the rest.

California is probably burning for the simple reason that shrubs and grasses always burn when ignited under the right conditions. Given that much of California is a natural desert, the conditions are often ideal there for grass fires to spread, once ignited. The ignition could have easily come from a smart meter, or an electric utility component malfunction.

What’s throwing a lot of people off is the apparent strangeness where trees are not burned up but cars and homes have been burned to a crisp. How does this happen?

Many people may not realize it, but most forest fires don’t burn up all the trees. They leave most mature trees alive and singed, ready to re-grow leaves and small branches in the following year. Trees don’t automatically burn up in every forest fire, and in fact, small brush fires are a very necessary and healthy part of forest ecology. Pine cones, for example, contain a natural wax that holds the pine seeds in place. This wax is melted by brush fires, releasing the seeds which find themselves planted in fertile ground, cleared of brush by the natural fires. Without forest fires, pine trees would have a much more difficult time reproducing.

It does seem strange to me that some photos appear to show tree leaves remaining intact, even while vehicles are burned out nearby. This seems to defy any reasonable explanation, so there’s a still a mystery element to explore in all this.

However, to see neighborhoods where homes are burned down while trees seem unaffected isn’t that unusual. Modern homes are made of combustible material such as 2×4 timber, plywood and roof shingles that can ignite. Plus, homes are filled with papers, furniture, clothing, wood floors and other combustible materials. In a typical home, all these materials are very dry and contain almost no moisture. Meanwhile, nearby trees may be full of moisture in their trunks, branches and leaves. This moisture offers a high level of protection against nearby fires. That’s why homes can burn down right next to mature trees that appear unaffected. It all depends on the level of moisture in the trees. (Ever try to light wet logs on fire? It’s almost impossible to get them to light.)

The bottom line here is that yes, it’s certainly possible that aircraft-mounted energy weapons systems could have sparked numerous fires in California and around the world, but it’s also not as strange as it first seems to witness homes burning to the ground while nearby trees remain largely intact.

Besides, God already punished California by making Nancy Pelosi the upcoming Speaker of the House.

3 thoughts on “Analysis: Were California fires set by Direct Energy Weapons? Probably not, but here’s why the idea is going viral”