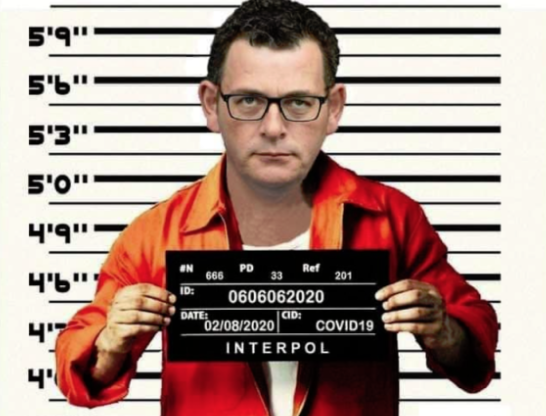 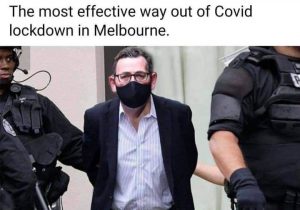 Barrister calls out Andrews: The lockdown is a bluff and illegal

A “MESSAGE from a barrister” circulating on social media on Monday has confirmed what various people have been saying for weeks: Daniel Andrew’s so-called health directives for lockdowns and the fines that supposedly enforce them are a sham, a deception and a bluff.
The “case” presented by the barrister purports to prove that Andrews’ hefty fines for enforcing COVID rules and directions from the chief health officer simply would not stand up in court.
Interestingly, Andrews backed down on much of his COVID lockdown on Monday, but still has petty nonsense rules about mask wearing that apply to some businesses and not to others.
The statement kicks off: “Know this. Lockdown orders have zero legal standing. Why did Daniel Andrews desperately want the Omnibus Bill detention powers? He had the existing fines mechanism to enforce directions orders which are the basis of the lockdown. So why the need for new powers. This answer is because people are waking up.

The barrister then pointed to page 106 of The Public Health and Wellbeing Act Division 1 Section 111 which states the spread of an infectious disease should be prevented or minimised with “the minimum restrictions on the rights of any person”.

“The clause doesn’t say ‘the restrictions on the rights of any person will be minimum to contain the spread of an infectious disease’. If the clause’s construction read this way, it would attempt to give the chief health officer arbitrary power to decide what’s minimum to get his job done as he sees fit, and with no consideration or reference to what the person, whose rights being restricted, thinks.  This is not how the law works or what the clause says.

“The legal drafting and clause construction is very clear. It says the chief health officer can do his job to stop the spread of an infectious disease, but a person’s rights restrictions must be minimal. He has a qualifier and restraint. He doesn’t decide what’s minimum. So who does decide what’s minimum?

“If a person, whose rights are being restricted, has no say in the matter, there would have been no need to include the clause in the legislation. The Parliament sought to preserve and protect civil liberties. It’s a check on unfettered powers. That is the purpose of the clause, otherwise, why have it in the legislation if the chief health officer has unrestrained powers? It’s a reminder and constraint on the chief health officer.”

The barrister’s message notes that the Westminster system constrains, separates, checks and contains power, through a mechanism known as the Separation of Powers, which means that the legislature (that makes laws), the Executive (Premier and Ministry) who execute law, and the Judiciary who interpret laws, remain separate. “This is a check on power so it’s not concentrated as we seem to have in Victoria at the present.”

“The default ‘Mentis’ (mind) of Parliament, in a liberal democracy, is to preserve freedoms, particularly the freedom of movement and association which the High Court has protected over and over and now Daniel Andrews thinks he can extinguish.

“The person who decides what’s a minimum restraint on a person’s rights is the person who has the rights. If that person has no say on what’s a restraint, the person would be deemed to have no rights, so why mention them? In this event, the person at best, has privileges which can be limited or extinguished. Like a driving licence. 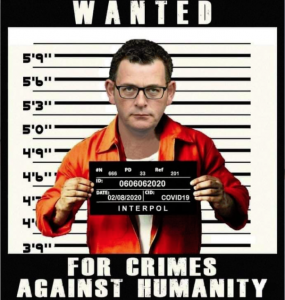 “True rights can only be suspended or limited by the right’s holder. These are known as inalienable rights – God-given which cannot be extinguished by the state, the chief health officer or Daniel Andrews.

“Division 1 Section 111 was drafted in acknowledgement of this liberal democratic principle. The Section is even referred to as the Principle of the Act, against which all Directions Orders must be measured. Case closed,” the barrister notes.

“What I have just set out is a legal argument by a barrister might make before a magistrate, who is usually ill equipped to handle such arguments. Now you understand why the last thing Daniel Andrews wants is fines to be challenged in court. Push the problem into the future. Maybe, even forgive fines so they never see a courtroom. The podium have zero standing and will never stand up in court when the BS fines are challenged. They’re all a big bluff. The lockdown is a bluff.

“It’s no wonder the Magistrates Court has adjourned all Covid challenged fines well into 2021.

If one illegal fine gets before a court, Andrews will buckle like he did with the Curfew when it was uncovered as a fraud. The Directions Order will be found to be as illegal as the Curfew. The day before the Curfew was challenged in the Supreme Court, it was quickly ended by Andrews.”

The barrister says the 5km restraint is equally illegal as an excessive restraint on the rights of Victorians. “I remind you. If Victorians have no rights, as Andrews asserts, then why mention them in the Act?

“While Andrews can’t be removed as Premier, he is subject to the Westminster system Separation of Powers, which means the Parliament or courts can clip his wings and stop his tyranny. As he has the numbers and Parliament and it’s not sitting, it’s useless to try a no confidence motion against Andrews, so we’re left with the judiciary and the courts. Spread this across social media.”

“Being awake and informed will set you free,” says the barrister. “With the legal illusion of fines swept away, so is lockdown. We decide when the lockdown ends, not Daniel Andrews. The police will run out of ink in their pens writing fines if we don’t cooperate.

“It was for this reason Daniel Andrews wanted detention powers in his Omnibus Bill. He feared someone would write a post like this and wake up Victoria. Repost this as far and wide as you can.

“Victorians don’t know or understand the law and Andrews feels omnipotent whilst Victorians are oblivious and kept in the dark. The average police member in the street is even less well equipped to handle these matter, so don’t try to enlighten them or argue whilst being issued with an illegal and worthless fine.

“They have no idea. They’re just following orders. In any event, fines are only allegations and not findings of fact or guilt. Fines become an admission of guilt when you pay them.”