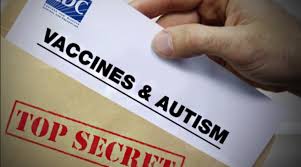 A turning point is happening in the U.S. despite the mainstream media’s best efforts to downplay and ignore it. Fraud within The Centers for Disease Control and Prevention (CDC) is now premiering in theaters throughout the U.S. as the documentary Vaxxed: From Cover-Up to Catastrophe has opened at the box office to massive interest.

The film centers on Dr. William Thompson’s 2014 admissions of research fraud with regard to manipulating the pivotal study that showed a correlation between the measles, mumps and rubella (MMR) vaccine and the onset of autism. Both the silence of Congress and the epidemic run up of autism rates since Dr. Thompson’s admissions have been staggering. Ignoring the opportunity to promptly act on Dr. Thompson’s information in 2014, the national conversation has grown rapidly encompassing pharmaceutical fraud, vaccine safety and government agency corruption.

The CDC has been silent throughout the damaging public relations it has received over the years. Open corruption and conflicts of interest have marred the agency’s vaccine division. However, recent bad press the CDC and pharmaceutical industry has received from Vaxxed appears to have put the agency and vaccine sector into damage control mode.

After Robert De Niro announced — and then days later retracted — the showing of Vaxxed at his 2016 Tribeca film festival, the public took note of the film in a major way. The hype generated in a week’s time by the fiasco was enough free publicity to propel the Vaxxed documentary upward like a rocket. When the Angelika theater stepped up to premiere the film in Tribeca’s absence, the countdown was on.

With highly questionable timing, the CDC publicly released its recent findings showing the incidence of autism is unchanged in the U.S. — the day before Vaxxed premiered in New York. Unfortunately for the CDC, the integrity of its estimated findings of 1 in 68 school-aged children with autism was to be challenged days later in the United States District Court for the District of Utah.

Dr. Zimmerman is a former Principal Investigator for the Utah ADDM Network. She “reported that University of Utah researchers were publishing data under people’s names who had not done the work and that the data contained uncorrected errors.” In 2012, Dr. Zimmerman — similar to Dr. Thompson — reported her concerns to the CDC as well as the Department of Health and Human Services only to be met with silence.

Meanwhile, with Dr. Zimmerman’s case happening as a backdrop, the mainstream media went into full attack mode 24 hours after Vaxxed premiered in New York. The same journalists caught earlier engaging in a coordinated onslaught of Vaxxed without viewing it now refused any link between vaccines and autism while absurdly attacking the idea of a discussion around it.

One outlet called the film “A security blanket of sorts for those needing something to believe or blame.” While another mainstream reported said the film “resembles the kind of one-sided, paranoia-stoking agitprop that political activists construct to sanctify true believers and assault infidels.”

The author of this article refuses to provide the links to such irresponsible and willfully damaging pieces attempting to shut down essential discussion around autism. While the media pens playful word games meant to disperse focus, the autism epidemic is real and Vaxxed is presenting new information to further the public conversation and possibly advance medical understanding. The weeks of attacks on Vaxxed producer Dr. Andrew Wakefield, the medical choice community and vaccine-injured children reveals a new low for journalism in the U.S. as well as the science and medical communities. It has become clear that few answers will be found from official outlets whose actions continually show that a discussion around the autism epidemic is not a priority.

It’s not just the U.S. that is questioning the safety of the MMR vaccine and potential research misconduct involving statistical gymnastics to hide its dangers. Dr. Peter Fletcher, who was Chief Scientific Officer at the Department of Health in the UK went on record to say that he found the “official complacency utterly inexplicable” in the face of a global autism epidemic.

Dr. Fletcher has also commented in the past that “the refusal by governments to evaluate the risks properly will make this [MMR vaccine] one of the greatest scandals in medical history.”

Hinting at what numerous whistleblowers have revealed, Dr. Fletcher commented:

There are very powerful people in positions of great authority in Britain and elsewhere who have staked their reputations and careers on the safety of MMR and they are willing to do almost anything to protect themselves.

Despite the best efforts of mainstream media outlets and regulatory agencies to ignore facts and muddy the waters, the public is still facing an epidemic of autism. The good news is that increasing numbers of people aren’t listening to those that forbid discussion around the role vaccination plays towards the onset of autism.

Fresh off its sold out premiere, Vaxxed is now on to the Manhattan Film Festival. In a public release by festival director Philip Nelson speaking on the role of such showcases, he stated:

It is not a film festival’s place to limit their [filmmakers] first amendment right of free speech, nor is it supposed to be the main stream media.

After he personally attended the premiere of Vaxxed at the Angelika Theater, Nelson commented:

After following this story closely, I wonder if many of the writers covering the story actually watched the film.

As Vaxxed continues its independent film festival and theater premiere’s, a battle for the truth is being waged involving government, the media, and the medical and scientific communities. Yet in the age of information, the wildcard to fast track the discussion will always be the insider with a conscious — the whistleblower.

Out there are more William Thompson’s, people who know what it’s doing to our children and it has to stop now. They have to do the right thing now. -Polly Tommey, Producer Vaxxed