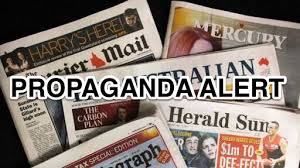 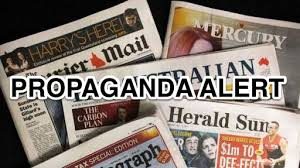 WOULD you kill a baby today? Would you put him through horrific pain? Would you take away his oxygen and let him suffocate to death?
Claire Harvey says that if you choose not to vaccinate your children you are doing all of those things, and are even personally responsible for the death of Riley Hughes.Really?!?!
I can not imagine the agony of losing a child. My heart breaks for those parents, the ones that lost Riley and the ones that lost the other 12 mentioned in the article. My heart also breaks for Baby Zane (pictured above) and for his parents. Baby Zane died from the DTaP vaccine (along with Prevnar)…the very vaccine that Claire demands everyone get because she believes it would have prevented Riley’s death. I can not think of anything worse than watching my children suffer and then die…But did I really murder them?

According to this article,  “The Department of Health says it does not know how the child (Riley Hughes) contracted the respiratory disease, also known as pertussis. Whooping cough is part of the routine vaccination schedule for babies at two months, four months and six months of age.”

In order for it to be the fault of a parent for not vaccinating their child, the child affected would have to be exposed to pertussis from another unvaccinated person.  However, the evidence that there was another unvaccinated person in direct contact with him seems to be non-existent.  Since 92% of his surrounding population is fully vaccinated, it’s far more likely that Riley came in contact with someone who recently received the DTaP vaccine.  It is a well-known fact that pertussis can be spread from anyone who has been recently vaccinated.

While these known and admitted side-effects do not directly disclose “autism”, a few of them are, by definition, symptoms of autism.  For example, encephalopathy, includes irritability, twitching, seizures, headaches, mental impairments, poor feeding, confusion, personality changes, and can lead to coma/death depending on the severity of the reaction.  About 1/3 of the autistic also have seizure disorders with symptoms like I just listed.  A rose by any other name is still a rose.  Symptoms of autism under the guise of any other name are still symptoms of autism. Vaccines are, without a doubt, associated with autism. 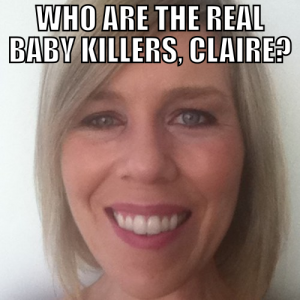 Is there enormous weight of scientific evidence that vaccines eradicated diseases? How about Polio? It did not.  Tetanus or Diptheria? Nope.  Cholera? Again, no.  The United States actually has the HIGHEST infant mortality rates in wealthy countries and one of the most stringent vaccine programs. Compare that to Japan, with one the most relaxed vaccination schedules and the lowest infant mortality.

So why DO people opt out of vaccinations? Is it true as Claire declares, that it is because we are selfish, ignorant, and don’t care about anyone else? In America, the most common groups of people to refuse vaccinations are the most educated, so there goes the ignorant theory. As far as selfish and not caring about anyone else…did we answer this in a poll I missed out on taking? Probably not. Through our quest to be most educated about the subject we do not believe that vaccinating our children will protect them, or anyone else’s. Nor do we believe that by everyone else vaccinating that ours are protected by errant “herd immunity”.  In fact, most parents that I know that opt out of vaccines as a means to protect our children and because of the opposition it may pose to our faiths (likeChristianity), seek to inform as many other parents as possible so that they can avoid grief of the parents of 493,323 people are now suffering since 1990 (Wow, this doesn’t even include the Cutter Incident that infected tens of thousands!). I have to agree with one thing she said, but not about anti-vaxers. I have been accused of going too far by likening forced vaccination to terrorism. In order to be a terrorist, you need to force a substance on a group of people against their will that could cause injury and death. People that do not vaccinate are not the ones spreading disease. You actually have to have it to spread it. My children are never sick, they have never had a disease, and they have never spread one. Terrorism is an act of will. If some child contracted whooping cough from his vaccine and spread it to others I would not accuse him or his parents of being terrorists. Who do I think are the terrorists? The ones who seek to take away the rights of parents and individuals to refuse an injection of toxins, bacterias, and viruses against our will, our religious objections, or our beliefs about what we have studied regarding vaccine safety and efficacy regardless of the popularity of the information are the terrorists. Anyone who wants to punish me, jail me, fine me for not vaccinating and then force me to allow the injection of aluminum, polysorbate 80, formaldehyde, aborted fetal tissue, various animal DNA, thimerosal, and a host of other toxins that has been proven to cause disabilities and death to others is a terrorist.

In the years following the study linking MMR to bowel disease (the one Claire blames the “quack doctor” for starting the concerns) it has been confirmed by studies done around the world that one of the conditions associated with autism is bowel injury linked to vaccines. In addition, had Dr. Wakefield‘s study been nothing but lies he would have gone to jail. Here he is, brilliantly discussing the issue of vaccines if you want to hear him first hand.

What about the immunocompromised that can not be vaccinated, such as those with leukemia? Leukemia usually shows up after the age of 1 and peaks from 2-5, after children have had all of their vaccines if they so desired. It seems more likely that the carcinogens contained in the vaccines (formaldehyde, polysorbate 80, etc.) would be causing cancer than an unvaccinated child suffering from cancer being at risk of exposure to an unvaccinated person with a disease.

Who exactly is it that we are trying to protect when we are driving campaigns that would eliminate children from playing with other children if they had not been vaccinated? Most children old enough to play with other children have already been vaccinated which should give them immunity if vaccines actually provide it. Even the vaccinated get ill, and in my own observation (and this published study) do so far more often than unvaccinated children. Would it be appropriate for all of the parents to bring our children’s medical record history to play dates for parents to pass around and review before deciding which children they can interact with? No! The truth is that when anyone else’s child gets their live Flu Shots and boosters they shed the live viruses, they are putting every child at risk, vaccinated and unvaccinated – because the vaccinated still contract the diseases for which they were vaccinated for. Even the CDC acknowledgesvaccine shedding.

Claire Harvey, if you are so certain that vaccines are right and safe I want to challenge you. I suppose that you side and agree with vaccine zealots like Paul Offit who said that newborns could withstand 10,000 vaccines at one time. I challenged him in a blog article a while back and hopefully someday he and a dozen colleagues, and now you, will take this challenge: Go on live national television (the news, any one of our celebrity doctor shows in America, 20/20, etc) and get 10,000 vaccines injected in the same sitting. If you survive it, I want you to show us with regular health screenings over a year or two that you do not have brain damage, bowel or bleeding disorders, diabetes, Guillaine-Barre syndrome, debilitating arthritis, cancer, or any other number of life-altering side-effects. If you did and remained healthy, that would probably go a long way to convince the anti-vaxers that they were wrong all this time.

This is our future. If there is a grain of truth to the claims of vaccine damage our future society is in dire trouble. It is estimated that if we continue on this path, by 2025 half of all United States children will be autistic. Who will run the government? Who will serve the military? Who will take care of them as they age if the other half of society doesn’t go into nursing and behavioral care? The life-span of the conditions that result in other reactions are often shorter and come with disability. These often life-long conditions are far more threatening than a week long rash or 3 days of diarrhea or a cough, which all come with life-long immunity. If we are talking about protecting our society we might want to stop and think about what it will look like if we continue on this path, which has hundreds of more vaccines in the pipeline that will also come with mandates.

So please, in honor of baby Zane, please, think twice before you vaccinate. Educate, and don’t have the same regret his parents do. 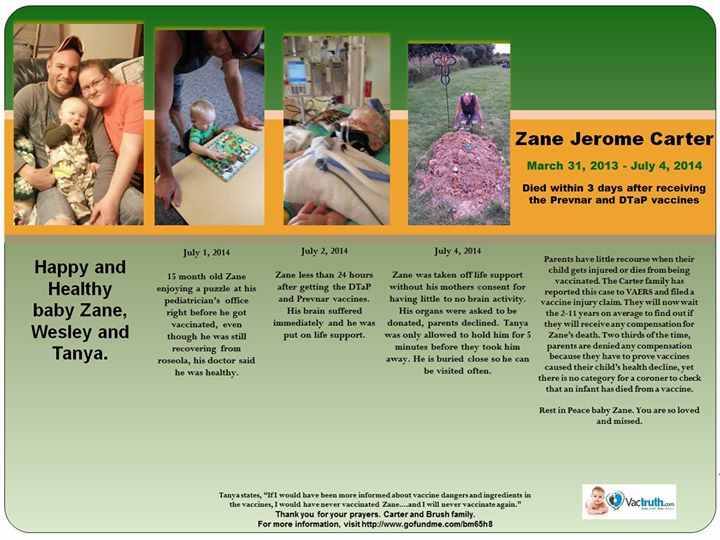