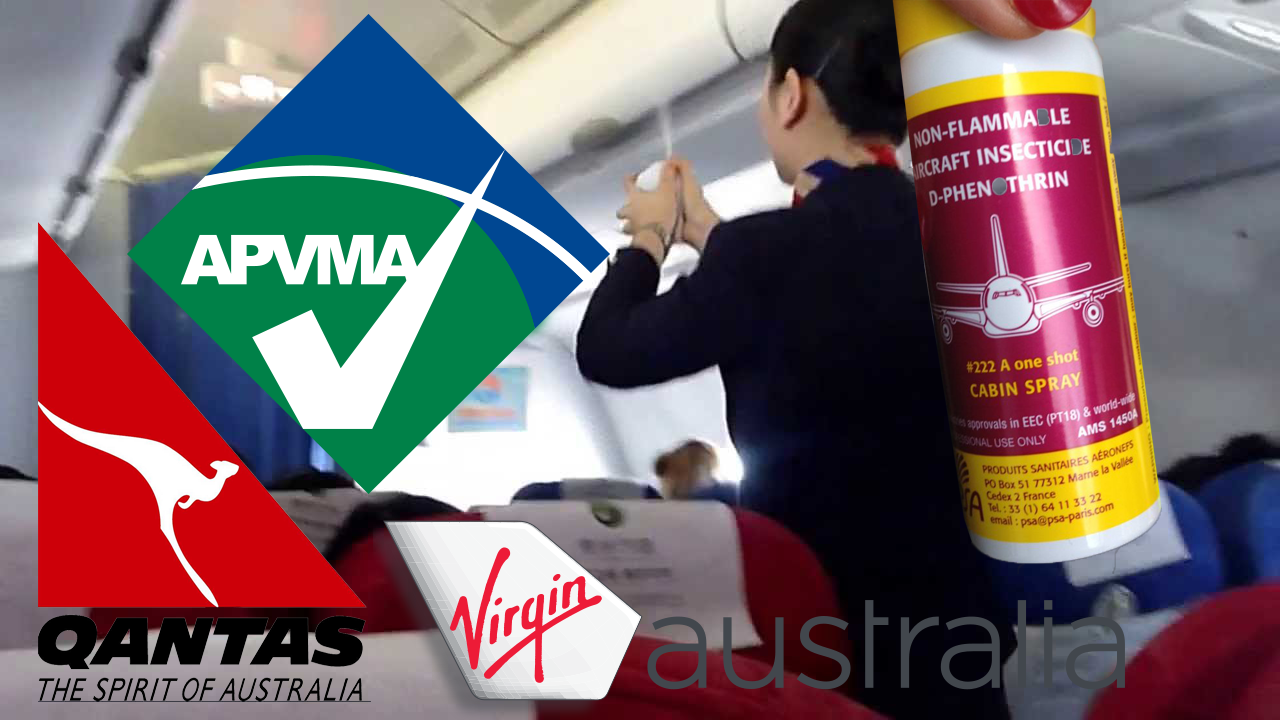 Last week I took a flight from California to Australia.

After a long 14 hour flight, everyone stood up and eagerly anticipated leaving the plane. Instead of getting off, we were informed that the plane would be sprayed with a “non toxic” insecticide.

I quickly grabbed my thick jacket, put my hood over my head, covered my face and made sure every breath I took was filtered through the jacket. Flight attendants walked up and down the isles, spraying the luggage bins and the passengers almost directly.

I waited for about 10 minutes while they made us sit in the fumes. I heard a few people cough. When we finally got up to leave the plane, a flight attendant asked me if I was ok because I was covering my face and I said “of course, just avoiding breathing this, it’s toxic.”

He matter of factly responded “it’s non toxic.” I replied “of course it’s toxic, everything that is an insecticide is toxic.”

What I should have showed him is that flight attendants like him have gotten brain tumors and Parkinson’s Disease, and sued the government for mandating use of insecticide on flights.

According to a December 2013 article from the Daily Telegraph titled “Landmark legal case will probe the link between Parkinson’s disease and insecticide sprays used on long-haul flights”:

“LONG-haul flight attendants who have been forced to spray insecticide through aircraft cabins every time they landed in Australia fear the chemicals may have given them Parkinson’s disease.

And experts have warned any frequent international flyer exposed to repeated doses of insecticide within an enclosed aircraft cabin could also face the same risk.

Former Qantas steward Brett Vollus has been diagnosed with the disease, which can leave victims immobile, speechless or with tremors, and is preparing to launch a legal action against the Commonwealth government, which enforces the need for spraying to prevent disease.

Mr Vollus, 52, worked as flight attendant with Qantas for 27 years up until May this year and was referred to a neurosurgeon as the symptoms of Parkinson’s began to kick in.

“We all blindly sprayed this insecticide as we landed in Australia after every long-haul flight. Why wasn’t I warned that it could give me this disease?

This is a nightmare that has ruined my life. I am very keen to start a legal action and if it can help others I am happy to lead the way.”

It’s oddly difficult to research online exactly what insecticides are sprayed on flights. The practice is decades old, with the infamous pesticide DDT being sprayed on flights to Australiafrom the 1940’s to 70’s .

According to Mother Jones:

“Exposing travelers on domestic flights to dangerous chemicals is not new. From 1944 until the late 1970s, airlines sprayed DDT on their planes, sometimes even while passengers were on board.

And from 1986 to 1996, Northwest Airlines used Bolt, a pesticide that contains chlorpyrifos, a potential nervous system poison. In 1994, the Journal of Pesticide Reform reported that chlorpyrifos may cause symptoms ranging from nausea to convulsions, and may also produce birth defects and other genetic damage in humans.”

The most detailed info I could find about what exactly is being sprayed comes from the first hand experience of a passenger, published at Health Nut News in an article titled “Woman removed by 6 Policemen off her flight for questioning what was being sprayed on her.”Reading from it:

“The most common pesticides used on airplanes are the synthetic pyrethroids permethrin and d-phenothrin (they kill insects by attacking their nervous systems) and studies have linked permethrin with Parkinson’s disease. But remember, the World Health Organization says it’s just fine.

Since the spraying began, passengers have reported flu-like symptoms, sinus issues, rash/hives, headaches, and swollen joints- and that’s just some of what’s been reported; far more serious issues like acute respiratory problems and anaphylactic shock have also occurred. But don’t worry, the WHO says there is no evidence that spraying insecticide in enclosed spaces, onto people, is dangerous.”

The Australian Department of Agriculture and Water Resources is the agency responsible for overseeing the spraying of insecticide on flights. An Australian government entity that regulates and influences pesticide use is called the Australian Pesticides and Veterinary Medicines Authority.

Sometimes the passengers sit in toxic fumes for the duration of a flight, instead of being sprayed for minutes at the end. According to Traveler:

“What happens now is the Department of Agriculture grants approval to airlines to perform their own disinfection treatment. Disinfection spraying is carried out at the last overseas airport before departure for Australia.

Treatment takes place after catering has been loaded, with the airconditioning system switched off, the overhead bins open and before passengers have boarded. If the required disinfection has not been carried out, the aircraft will be sprayed on arrival prior to passenger disembarkation.”

Another recently developed pesticide in Australia is being hyped as a non toxic alternative, Sero-X. It is made from peptides that naturally occur in a plant. This is probably not going to be sprayed on airplanes though.

In concept it sounds like a viable alternative to neonicotinoids or organophosphates, but if you know the history of pesticides you might find it hard to believe in something like that.

Please share this with any person flying to Australia, because it benefits us to know exactly what we ingest, and how bad ideas become a routine aspect of life we are coerced into accepting.

2 thoughts on “I Was Sprayed With Insecticide Flying to Australia: Linked to Brain Tumors, Parkinson’s”