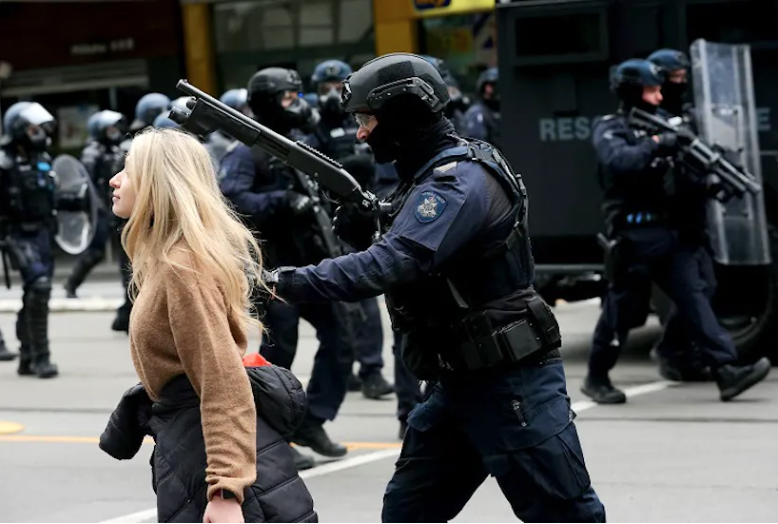 Last week in the Parliament of Victoria, I called for Premier Daniel Andrews to apologise to a Ballarat mum who dared to fight for freedom in a democratic nation.

I best not say a democratic State, for that status has been rudely challenged by our Labor over several years – especially during Covid.

My question was asked via what is termed a Constituency Question – a question asked on behalf of a constituent, in this instance, Zoe Buhler. My question was ruled out of order because the Legislative Council President said: ‘You cannot ask the Minister to sack the Commissioner.’

‘Who else is going to ask him to sack him if I don’t?’ I responded.

In my opinion, the Premier, Patton, and Cornelius have stained Victoria’s reputation for liberty, freedom of speech, and the right to peaceful protest. I believe they have damaged the reputation of the police force for whom public respect is critical.

In late August 2020, pregnant mum, Zoe Buhler, was charged and handcuffed in her own home by Victoria Police, accused of inciting a protest in breach of public health orders.

Her great ‘crime’ was to put a message on Facebook promoting a ‘peaceful protest’ – with social distancing measures and masks – to ‘end lock downs’ and ‘stand for human rights’.

The Assistant Police Commissioner, Luke Cornelius, alleged Ms Buhler had ‘engaged in serious criminal behaviour’. He referred to those objecting to lockdowns as ‘batshit crazy’.

How serious was this charge, given it has been dropped weeks away from a state election? Surely a serious charge should be pursued fully through the courts?

‘Clearing the political decks’ is how some cynics might view it.

Many Australians, and others across the world, are familiar with the vision of Zoe Buhler being handcuffed by police in her kitchen. It is the unfortunate stuff of Covid legend.

On Tuesday, police withdrew the charge. It took police two years to do the right thing. Many questioned the validity of such so-called crimes that turned ordinary citizens into criminals for things like … walking outside.

During this time, Victorians experienced things they never thought they would in a free country, one in which democracy and respect are fundamental tenets of our peaceful way of life.

Other than Black Lives Matter gatherings, Victorians observed their right to protest being annulled with pepper bullets and tear gas. Citizens were filmed running from police officers who used batons and a bravado in clips that went viral worldwide.

Had these crowds been assembling in the streets to riot, to burn buildings, to loot, to murder, to wreck, or to create mayhem, then Victorians would have understood such aggression by the police.

But these crowds had gathered for freedom.

They gathered for the right to go to work, the right not to be forced to take vaccines, and the right for their children to go to school or playgrounds.

They rallied for democracy, for the return of the Parliament to make decisions, and against the absolute authority of emergency power contained in the Premier.

It was under Labor’s watch that the police chased protesters, hurried on grandmothers from park benches, handcuffed a pregnant mother, held elderly men on the ground, and kept Melbournians locked down for 23 hours a day unable to travel – or even walk – further than 5 kilometres from their homes.

The Premier offended many Victorians during this time, locking them out of their state. They were stopped from being with their dying parents or attending their funerals. One of his most offensive statements was, ‘We had no choice.’

Let me be very clear: the police had a choice about whether to charge Zoe Buhler.

It is why Labor must apologise to Ms Buhler for their contempt of individual rights and why their government must explain to the Victorian people why police were instructed to act so aggressively.

An explanation as to why it took two years for the charge to be withdrawn would also be welcome.

The Police Minister should now consider sacking the Police Commissioner and his Assistant, Luke Cornelius, the same officer who sympathised with Black Lives Matter protesters and their right to gather.

It seems apparent that, like much of the Victorian bureaucracy, Victoria Police has been politicised and the law has been used to hush citizens who disagree with the government.

Bev McArthur is Liberal Member for Western Victoria and Shadow Assistant Minister for Scrutiny of Government.