I hope these videos stand as a permanent reminder to all Australians that we can never forgive or forget the brutality of the Victorian police state forces during the COVID PSYOP.

The brutal Victorian Police response to the COVID PSYOP under Shane Andrew Patton and DICTATOR Daniel Andrews will never be forgiven or forgotten by the Australian people and those who suffered under the boot of this tyrannical regime.

Shane Andrew Patton who is the chief commissioner of Victoria Police now want’s to rebuild public trust in the State of Victoria by returning to a more civil and grass roots type of policing after terrorizing unarmed and innocent civilians for over a year.

We won’t forget about Victorian Police forces and the UN imported Robocops in black who viciously attacked and terrified the people of Melbourne under Dictator Dan’s criminal COVID-19 response.

Militarized SOG units “special operations group” or mercenaries operating under the Andrews dictatorship in Melbourne and this should be extremely disturbing for every Australian,

As the criminal Andrew’s regime looks for re-election in 22 it’s time for the police forces to take a step back, bring out the bicycles and return to a more loving and respectful place where cats are quickly rescued from trees and grannies escorted across busy streets.

This is the image that Victorian police now want to display to the public, but shocking police brutality in the state of Victoria is actually endemic so just watch the shocking 60 minutes investigation below.

I don’t think so Dan and it would be utterly stupid for anyone to believe that these thug police forces won’t step up to commit these violent crimes against the public when ordered and this is why they can never be trusted again.

We the people will never forget or forgive the outrageous and criminal brutality dished out by Victorian Police State goons and their UN imported Robocops.

It is Shane Andrew Patton and Dictator Andrews who need to be arrested, charged and put on trial for crimes against the people but how can this happen in such a corrupt and criminal environment?

It is of extreme importance that the Australian people give all these bastards a big vote of no confidence and to never trust or show any respect for these thug police forces again.

Victorian Police State thugs spent months bashing, attacking, fining, arresting and brutalizing innocent civilians and now we are just supposed to forget it and be friends? NO BLOODY WAY!!!!

Below are just a few videos to remind people of what took place only a few months ago and the disgusting brutality we all witnessed to protect the public from a fake virus.

The moments where Victoria looks like a police state

POLICE BRUTALITY IS GETTING WORSE IN MELBOURNE, VICTORIA

Victoria, Shane Patton the Police GOON looks like a villain from “V for VENDETTA”

Police in Victoria Australia Arresting at Will!!

Why Has Victoria, Australia Become a Totalitarian Basket Case 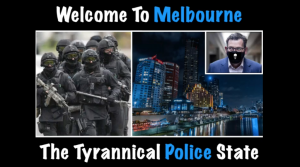 Draconian enforcement powers have become commonplace in Victoria since the beginning of the coronavirus ‘pandemic’, and are set to continue with the passing of the Omnibus Bill.