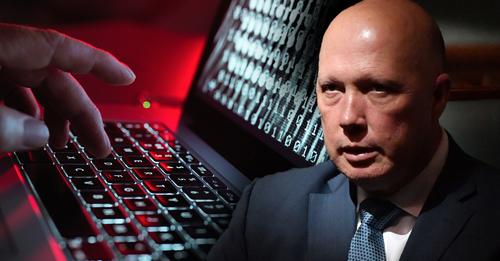 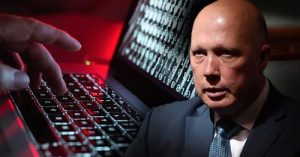 A controversial bill that will significantly boost the capacity of law enforcement agencies to identify and disrupt ‘serious criminal activity’ online has passed the Senate.

Australia’s controversial and heavily scrutinised hacking bill has been passed by the Senate, giving authorities three new powers when it comes to ‘tackling online crime’.

TOTT News first reported the introduction of this bill in December 2020, after previous calls by Peter Dutton in March 2020 — right after he returned from a Five Eyes meeting in the United States.

(A meeting that was suspiciously held around the same time the pandemic was officially declared. Of course, he ‘caught COVID’ while over there, which hid questioning of his trip perfectly).

Now, this 18 month vision has come to pass and threatens what little privacy Australians have left.

The legislation includes the ability to take over a person’s online account, collect intelligence from online networks, and add, copy, delete or alter data, during the course of an investigation.

These powers will substantially boost the capacity of the AFP and ACIC to ‘fight cyber crime’.

Specifically, agencies will be granted the following abilities:

Unsurprisingly, these new powers have copped criticisms from a number of civil liberty advocates.

“No one’s safe under these new laws,” Victorian Greens Senator Lidia Thorpe said of the proposal.

“It will affect grassroots communities across the country, it will affect children. It will affect anybody who downloads a movie illegally over the internet – they could go to jail for five years.”

Once again, Australia’s intelligence community has gained more powers to monitor the online realm, now expanding to federal police. As is typically the case, the scope of the new powers are disproportionate to the threats of serious and organised cybercrime to which they are directed.

This is because it is not designed for that purpose.

It is designed for the systematic targeting of new-age thoughtcriminals.

There is a lack of evidence justifying the need for warrants of this nature, beyond those already available. In fact, no other country in the Five Eyes alliance has conferred this much power on a law enforcement agency, that this bill will. These things are normally left for intelligence alone.

While the legislation focuses on crimes such as child sexual abuse and ‘black market’ activity, experts warn there are few checks and balances in place to protect citizens.

I mean, let’s not forget that ‘paedophiles’ have been used as an excuse each and every time a surveillance bill is passed, yet, no progress is ever made in catching those criminals?

We still have a plethora of entangled surveillance laws in Australia — totalling more than 124 acts amending legislative frameworks for the intelligence community since September 11.

This includes concerning bills that have passed in recent years, including:

Australia’s anti-encryption legislation, which requires internet service providers to offer up details about technical characteristics of their systems, such as apps, websites or devices, that could help intelligence agencies exploit weaknesses that have not been patched.

Let’s also not forget about the ‘trio of doom’ introduced in 2014, that opened the gateway for a new-age of digital surveillance and criminal investigation, ahead of the G20 Summit in Brisbane.

Every time, it is always the same old story.

All about our ‘safety’ and ‘protection’.

Although this may seem on the surface to about ‘children’ or ‘stopping criminals’, many readers of this site will already see how this piece of the puzzle will help the larger picture form.

In July 2020, the Department of Foreign Affairs and Trade established a new taskforce to counter “online disinformation campaigns”, in a bid to further clamp down on social media activities.

Authorities have made it clear time-and-time again that they are targeting free thinkers.

Foreign Minister Marise Payne warned of an “infodemic” of online misinformation — a term used frequently in recent months — and said it was troubling that some countries were “using the pandemic to undermine liberal democracy and promote their own, more authoritarian models”.

The taskforce came as the Australian Communications and Media Authority (ACMA) handed down a report naming bushfire and COVID-19 ‘conspiracies’ as a main source of disinformation.

Australian organisations are 20 times more likely to intercept telephone calls than the United States government. This includes accessing personal data an astonishing 1,200 times per week in 2015.

The government’s surveillance bill could be used to target everyone from Freedom Daycampaigners, to underage kids illegally downloading movies, critics have warned.

Now is the time to learn and understand how to protect yourself online.

We have left some guides here on the website to assist, including:

What Your ISP Knows and How to Stop it Tracking You

Why Homeowners Need Residential Proxies – All You Need To Know

Australian Children At Risk Online: Parents Advised To Be Vigilant

We will leave you with this great TOTT cartoon from Steve Hunter:

One thought on “Australia’s controversial online hacking legislation has passed”