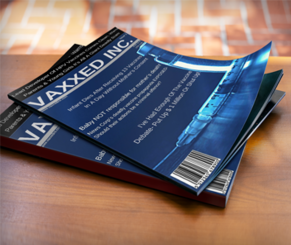 In a period of 6 weeks, the magazine has gathered a large number of subscribers. Readers from all over the world have expressed support in wanting the magazine to be published regularly, spread the truth and create more awareness.

The magazine has already achieved one of its goals, i.e. fostering open debate. Here are some of the comments that illustrate the reception of the magazine and impact of its content amongst readers:

“It’s time that the governments stops health ministers from getting perks from pharmaceutical companies to close a blind eye on the poison they produce. They should also have independent quality control inspectors of the antibiotics that come into the country e control every Bach not just the first. Pharmaceutical companies are not making medicine affective to cure. If pharmaceutical companies can’t make products to heal with no side effect than these criminals shouldn’t be allowed sell their rubbish. People should think 3 times before they decide to have children”.

“Find it interesting that we all want to know what’s in our medications but not at all concerned what’s in a vaccine. Medications are withdrawn or side effects alerted, but I rarely hear of this with vaccines. We just trust the government apparently on this one…”

“What a great Mag. Australian Pollies eat your hearts out and ANR CONGRATULATIONS. Your newspaper is the only one that l read and now a second work of Art. Thank you for keeping Free Speech alive in Australia, where asking questions is seen as a crime. l will be asking all the Newsagencies in my area to stock it”

“Great to see, no other area is more in need of public debate and close scrutiny by independent sources than vaccines, from their unique absence of product liability to their dangerous lack of long term double blend placebo controlled testing due among other things to their categorization as biologics not pharmaceuticals. Informed consent is greatly lacking and it’s time justice was brought to this industry in the form of transparency. I hope the magazine does very well as it is finally providing a well needed service. Well done”!

“Yes, the truth is out on big pharma being part of new world order. Vaccinations are out of control with slow genocide of human race”

“Someone needs to warn the world what the UN are doing to the vaccines, in the name of depopulation….”

“This is good news. Get the truth out there”

The magazine, Vaxxed Inc., discusses the big global controversy surrounding vaccines and vaccinations. The publication raises questions on the link between autism and vaccinations, Big Pharma’s role and alleged corruption in promoting vaccines for profits, the side effects of some vaccines and case studies demonstrating how vaccinations have adversely impacted the health of innocent children and their families.

Despite the global demand, the magazine launch instantly created controversy across the country. According to a source who prefers to be anonymous, it has been reported that government agencies are pressuring newsagents across Australia to refuse stocking the magazine in newsstands. A manager from the Vaxxed Inc. publication department said “we expected nothing better from the allegedly corrupt government officials who have been bribed by Big Pharma to do their dirty deeds. However, in this digital age, there is just so much big organisations can do to stop free speech, especially with a highly skeptical public that is no longer believing or accepting the government’s words on face-value”.

This 72-page, bi-monthly (digital and print) publication is aiming to air views from various sources starting from analysts to doctors from all over the world.

The magazine’s goal is to raise awareness and challenge what Australian and some global authorities expect us to believe without question. According to one industry observer, “questioning anything vaccine-related is a major stigma in most western societies. However, in a civilized and modern society one must have the courage to challenge what many have taken for granted. I am glad that Australia finally has a magazine that does so and I hope it will spread awareness and give people courage to step-up”, she said.