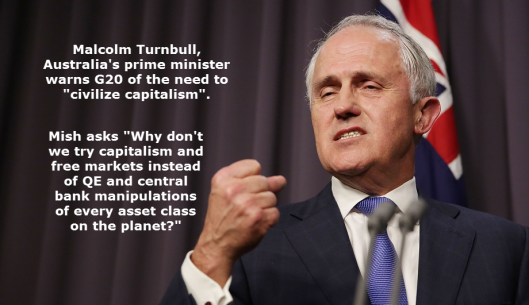 Is it time to “civilize capitalism”?

Leaders of the world’s 20 largest economies have been warned that they must “civilize capitalism” as they seek to revive economic growth and address growing public scepticism about the benefits of free trade and globalisation.

Officials present during closed-door sessions said US president Barack Obama, UK prime minister Theresa May and her Australian and Canadian counterparts emphasised the need to placate public discontent. According to the officials, Australian prime minister Malcolm Turnbull, a former Goldman Sachs banker, warned his peers of the need to “civilize capitalism”.

One G20 official said there was a high “degree of awareness” among heads of government that globalisation could be thrown into reverse. “It has taken the rise of populists across the world for them to realise this,” he said. “If we do not address the issue of fairness, [it] could endanger the global economy.”

Before the two-day meeting, the US government argued that a “public bandwagon” was growing to ditch austerity in favour of fiscal policy support.

“Maybe the Germans are not absolutely cheering for it but there is a growing awareness that ‘fiscal space’ has to be used to a much greater extent,” agreed Ángel Gurría, secretary-general of the Organisation for Economic Cooperation and Development.

Instead of trying to “civilize capitalism”, I suggest we try capitalism and free markets instead of massive amounts of QE, central bank sponsored wealth inequality schemes, bank bailouts, and manipulations of every asset class on the planet, coupled with free handouts to millions of refugees at the expense of everyone else.