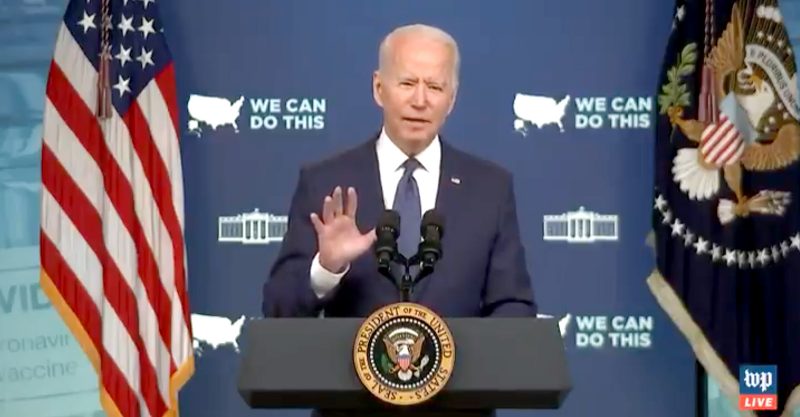 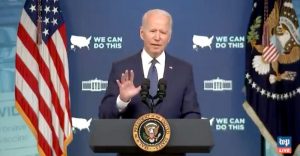 The Biden administration’s plan to ramp up efforts to get more Americans vaccinated against COVID by “literally knocking on doors” has sparked backlash.

President Joe Biden on Tuesday announced plans to ramp up the federal government’s efforts to get more Americans vaccinated against COVID under a new program that includes “literally knocking on doors,” as Biden puts it.

Speaking from the White House two days after the federal government fell shortof its goal of having 70% of adults get their first COVID shot by July 4, Biden said:

“So, please get vaccinated now. It works. It’s free. And it’s never been easier, and it’s never been more important. Do it now — for yourself and the people you care about; for your neighborhood; for your country. It sounds corny, but it’s a patriotic thing to do.”

According to data from the CDC, more than 67% of American adults have received at least one shot and more than 157 million are fully vaccinated.

Under the new program, Biden said the White House will deploy teams of officials from the Centers for Disease Control and Prevention (CDC), Federal Emergency Management Administration and other federal health agencies. 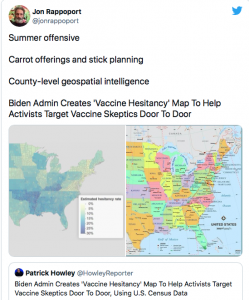 Biden suggested the unique door-knocking approach was needed now that “we are continuing to wind down the mass vaccination sites that did so much in the spring.”

The program also will make the vaccine available in more healthcare settings, and will provide more assistance to thousands of pharmacies, doctor’s offices and other medical facilities so they can distribute vaccines, Biden said. Vaccines will also be doled out at sporting events, summer events and religious activities, he added.

Biden said the administration will “step up efforts to get vaccines to your family doctors and other doctors who serve younger people so that adolescents ages 12 to  18 can get vaccinated and — as they go for back-to-school check-ups or getting ready for their physicals they need for fall sports,” Biden said.

Biden cited concerns over the COVID Delta variant, which he said is more transmissible and has forced some European countries to return to lockdowns.

The president did not mention any of the safety concerns previously noted by the CDC and U.S. Food and Drug Administration, including blood clots and heart inflammation,  associated with the vaccines.

White House Press Secretary Jen Psaki, in a briefing earlier in the day, said efforts would continue to convince vaccine holdouts, but she ruled out any federal mandates for now.

The administration will first target communities with lower vaccination rates, Psaki said. The door-to-door outreach efforts will get information about vaccines to people who haven’t received them yet.

In addition to the door-to-door information campaign, Psaki said other measures would include a “renewed emphasis on getting the vaccines to more primary care doctors,” and increasing access for workers at job sites.

“You don’t just give up just because you haven’t reached every single person,” Psaki told reporters. “We’re going to continue to apply … what we’ve seen have been the best practices over the past several months.”

“It’s a foreboding fork in the road to totalitarianism. We are now moving beyond the propaganda stage into this very coercive program where federal agents appear at American homes with the menacing message: ‘We know who you are and where you live. We have you on our list, we have your medical records, we want your neighbors to know that you are dangerous. We don’t recognize your property or privacy rights. You must take our untested, experimental pharmaceutical product. If you want to end this harassment, you must submit to a risky medical intervention made by an unscrupulous company with no liability and if you die or suffer permanent neurological injury, tough luck!’” 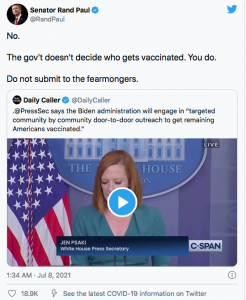 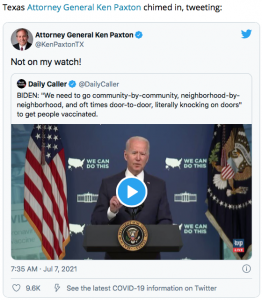