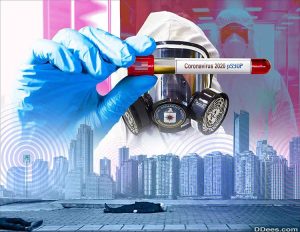 This is way beyond the realm of coincidence!

The Chinese Government ran a drill or exercise on September 18th, 2019, in Wuhan, where they simulated a response for … a novel coronavirus strain!

What are the chances of the Chinese authorities randomly choosing to practice for a coronavirus entering their country, given the thousands of pathogens and diseases they could have practiced for?

This drill was held exactly 30 days before the key date of October 18th, 2019 – the same date when the Wuhan Military Games began and also the very same date when Event 201 (Big Pharma, Bill Gates, China’s CDC, America’s CDC, etc.) was held in the USA which was also simulating a ‘fictional’ scenario of how to handle a coronavirus epidemic. Chinese Government foreknowledge? Chinese authorities conducted a drill for a novel coronavirus 30 days before the Wuhan Military Games began. Note from Jennifer Zeng: There is no photo caption in the original report. Could be someone giving a presentation.

Chinese Government Foreknowledge Beyond The Realm Of Coincidence

This information was made possible thanks to the brave reporting of Chinese citizen journalist Jennifer Zeng (and Spiro Skouras for his video interview):

On her site, Zeng posted a English translation of the Chinese article Wuhan Customs Holds 30 Days Countdown to Military Games and Emergency Response Drill at Ports which revealed the drill, which is highly reminiscent of Western (especially USG) false flag operations, which usually contain telltale signs of manipulation such as foreknowledge and ‘coincidental’ drills for an attack or event which later becomes reality.

Here are the first 3 paragraphs:

“This afternoon (September 18), an inbound flight from an unknown country arrived at Wuhan Tianhe International Airport. All in a sudden, the portal nuclear radiation monitoring system alarmed. Wuhan Tianhe International Airport Customs, subordinate of Wuhan Customs, immediately controlled and reinvestigated the passenger who triggered the alarm and his baggage. It is found that the passenger was carrying a bottle of “Myanmar ore” which seriously exceeded the standard radiation level.

In the meantime, an airline company reported that “A passenger on the inbound flight felt uncomfortable, had trouble breathing, and showed unstable vital signs”. The airport customs immediately initiated the contingency plan and quickly started to transfer the patient, clean the aircraft, and further investigate those who had direct and indirect contacts with the passenger.

Two hours later, the Wuhan Emergency Center reported that the patient had been clinically diagnosed as novel coronavirus infection.

This picture shows the scene where the port emergency response drill was held at the Wuhan airport during the day, in response to the 30-day countdown to the 2019 Wuhan Customs Military Games.

The purpose of this drill was to enhance risk prevention at the ports, to increase the effectiveness of portal inspections, and to further strengthen the ability of Wuhan Custom to react to urgent incidents, especially in areas of public health …”

The picture referred to is either this one below or the featured image above: Note from Jennifer Zeng: There is no photo caption in the original report. Could be people attending the drill.

Did You Know? There’s A Connection Between Coronavirus And 5G

As Zeng says, the average person in China has no idea about the source of the virus, the background to the epidemic and now this new information on Chinese Government foreknowledge. The majority of people there get their information via China’s social media platforms such as WeChat and Weibo – which are heavily monitored and censored.

In fact, there were draconian new laws just passed in China, which decree that you get 15 years in jail for “spreading rumors” and the death sentence for “purposely spreading (the coronavirus) disease.” So what are the implications of this?

Firstly, it shows that Chinese Government – just like the major Western players, USG, CDC, Big Pharma, Bill Gates and co – are in on it.

Secondly, it potentially weakens the theory that this is a race-based bioweapon. If the Chinese knew this was coming and allowed it (at the very least) or deliberately created and released it (at the very worst), they are shooting themselves in the foot. It is far more likely that if they were going to release it in their own territory, they would create a non-race-based bioweapon.

Reports are that deaths have climbed in Iran and are starting to accumulate all over the world, so the jury is still out on this issue. It should be noted that the USG certainly has a long history of experimenting upon its own citizens [e.g. Operation Sea-Spray (1950), Norfolk Naval Supply Center experiments (1951), Operation Big Itch (1954), Project 112 (1962), etc.]. Why assume the Chinese Government is any better?

Is The Chinese Government Signing On To The Depopulation Agenda?

There are still many more questions than answers with this coronavirus epidemic, however Chinese Government foreknowledge is a very interesting piece of the puzzle. I will end by linking to another article on Zeng’s website, A State of Torture, which details her extreme suffering at the hands of the brutal Chinese regime which in 1999 turned against Falun Gong practitioners, imprisoning them, torturing them, killing them and even harvesting their organs.

Falun Gong (or Falun Dafa) is a modern Chinese spiritual practice that combines meditation and exercises with a morality-focused philosophy on the 3 qualities of truth, compassion and tolerance. It differs from Qi Gong schools in its absence of fees or formal membership and its lack of ritual. It is entirely apolitical!

It has been shown time and time again to greatly improve mental and physical health. At one point, 1 in every 12 Chinese people were practicing it. Although it in no way threatened the Chinese Government, officials felt outnumbered and their power threatened, so they destroyed it in a savage and sickening fashion. This is, unfortunately, the kind of darkness we are dealing with when it comes to the Chinese Government.

Also Read: There’s A Connection Between Coronavirus And 5G