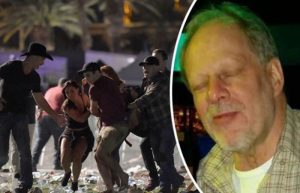 With the body count and wounded numbers rising, and the concert shooter, Stephen Paddock, dead, here are a few questions:

What weapon was he using? That is important in deciding whether Paddock could, from a significant distance, inflict the reported destruction of life. Or whether, as earlier reports/rumors suggested, there was more than one shooter.

At least ten weapons were found in the shooter’s hotel room. He had checked into the Mandalay Resort Hotel several days earlier. How did he bring in all the weapons? Disassembled? Did he have prior experience with weapons?

In an interview, Paddock’s brother said he was absolutely shocked, and his brother, Stephen, was “just a guy.” No motive, no reason to go on a rampage. True? False? What turned him into a killer? Had he ever been under psychiatric care? Had he been prescribed, for example, SSRI antidepressants, which are known to push people over the edge, into homicidal violence? If he was “just a guy,” did that include significant experience handling weapons? Was he capable of bringing all or some of the weapons into the hotel in pieces and then assembling them?

The Guardian: Paddock’s brother said, “He’s not an avid gun guy at all. The fact that he had those kind of weapons is just – where the hell did he get automatic weapons? He has no military background or anything like that. He’s just a guy who lived in a house in Mesquite, drove down and gambled in Las Vegas. He did stuff. Ate burritos.”

Police reports seemed to indicate, at first, that police broke into Paddock’s hotel room and killed him. Then the press were told that Paddock committed suicide as the police entered, or before they entered.

For a time, police were searching for Paddock’s friend, companion, roommate (?), Marilou Danley. Reports then suggested they had her in custody. But a later report indicated she was overseas, and the police were satisfied she had nothing to do with the shooting. How were the police able to determine that so quickly? Her absence from Las Vegas would not rule out the possibility she was involved in the planning.

Then we have this: “CAIRO, Oct 2 (Reuters) – Islamic State has claimed responsibility for a shooting that killed at least 50 people and wounded over 400 in Las Vegas early on Monday, and said the attacker had converted to Islam a few months ago.”

“’The Las Vegas attack was carried out by a soldier of the Islamic State and he carried it out in response to calls to target states of the coalition’,” the group’s news agency Amaq said in reference to the U.S.-led coalition fighting the group in the Middle East.”

“’The Las Vegas attacker converted to Islam a few months ago’,” Amaq added.

True? Bogus? An ISIS attempt to take credit for an attack, with which they had no connection?

Earlier this morning, I came across a tweet which I can’t locate anymore. It named another Stephen C Paddock, who is 44, who has been convicted of several crimes involving lewd acts on a child and child molestation—11/28/01 (South Carolina), 4/06/94 (Indiana), and 11/09/89 (Indiana). The tweet included what appeared to be a screen shot of an official law-enforcement document, also indicating that this Stephen Paddock had been confined, at one point, in a South Carolina mental institution.

Then there is the story of a concert goer who was warning people before the shooting that they were all “going to die.” Who is she? Is she involved?

The Express (UK): “One woman, who was at the Route 91 music event, claimed an unidentified woman had told other concert-goers they were ‘all going to die’ after pushing her way to the front of the venue…The witness, 21, told local news: ‘She had been messing with a lady in front of her and telling her she was going to die, that we were all going to die. They escorted her out to make her stop messing around with all the other people, but none of us knew it was going to be serious’…She [the winess] described the lady as Hispanic. The lady was escorted from the venue along with a man. The unnamed witness, who was attending the event on her 21st birthday, described the pair as short, both around 5 ft 5ins to 5ft 6ins tall, and looked like ‘everyday people’.”

In every one of these mass attacks, average news consumers assume the police and the media “have the story right,” and all remaining questions are “just details that will eventually be worked out.”

That’s not a wise assumption. It’s especially not wise when connected major agendas are on the line: removing guns from all citizens; accelerating militarized police presence in every aspect of daily life; keeping citizens in a state of anxiety, inducing their decision to stay at home behind locked doors and not venture out; reduction of public events of all kinds; degradation of the economy.

Such agendas can result in violent events which are not what they seem to be.

(Links for this story will be added later.)

This is my second report on the tragic mass murder in Las Vegas on Sunday night.

I’m looking at a Getty image of two broken windows claimed to be on the 32nd floor of the Mandalay Bay Hotel, where the shooter purportedly fired an automatic weapon(s) at concert goers. I count 10 intact windows going around a corner of the building between the two broken ones. These broken windows are from the same hotel room? That’s questionable, and worth checking. If the windows are from two adjacent rooms, it suggests the likelihood of more than one shooter.

Las Vegas police scanner audio on first call-out to the hotel records an officer emphatically saying the shots are coming from half-way up the hotel. The hotel has 43 stories. The 32nd floor is where police claim they found shooter Stephen Paddock’s dead body and his cache of weapons. Perhaps the police officer was estimating when he said “half-way up.” If not, he was seeing shots fired from lower in the hotel. That would suggest the possibility of multiple shooters on different floors.

The latest estimate: 58 dead, 515 injured. It’s expected that more dead and wounded will be reported.

Variety.com states: “…the shooting rampage that police have said lasted about four and a half minutes.”

That would come out to an average of one person killed or injured every 2.1 seconds.

The question arises: how likely is it that one person, particularly Stephen Paddock, was the shooter, since according to his brother, Stephen was “not an avid gun guy at all…He has no military background or anything like that.”

I’ve still not seen a definitive statement about what kind of auto weapon(s) Paddock was supposedly using. One television commentator mentioned it would have been very, very expensive.

Initial reports of more than one shooter were quickly dismissed this morning.

These are questions, not conclusions, and they should remain open questions—in distinction to mainstream news, which has, as usual, gone along with blinders, taking dictation from law enforcement: