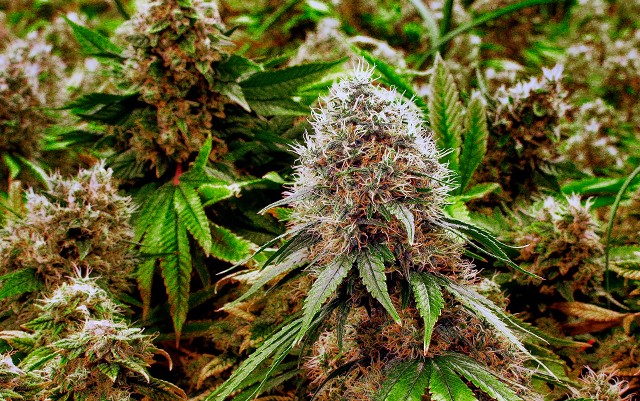 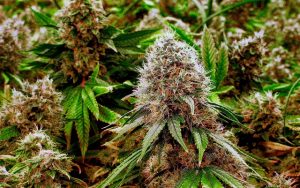 The truth about Cannabidiol (CBD) and the health benefits of the cannabis plant in general can no longer be suppressed – and the exciting thing is that we are just at the beginning. We are literally just at the start of the long road of cannabis knowledge, which will take us to a deeper understanding of this astonishing plant, its varied uses and its manifold medical benefits.

We still don’t even know how many cannabinoids (natural chemical compounds endemic to the cannabis plant) it contains – over the years the number has been revised in various places from 66 to 85 to 113+. We certainly don’t know the full range of effects of these cannabinoids, nor do we understand the synergistic way they work together, which is of the utmost importance. However, we do know enough to say that one of the foremost cannabinoids is cannabidiol or CBD, and we do know that it has incredible potential for healing a wide range of diseases, including diabetes, insomnia, anxiety, depression, migraines, asthma, scar tissue, Crohn’s, epilepsy, seizures, schizophrenia, Alzheimer’s, Parkinson’s and cancer. (To learn more, please check out Wake Up World’s articles on the medicinal value of cannabis here.)

Ironically, the whole propaganda campaign of “reefer madness” that tried to demonize marijuana in the 1930s-1950s insinuated that pot caused schizophrenia, and while THC can have some mildly negative psychoactive effects when smoked, it may turn out that CBD-rich cannabis oil cures schizophrenia, not causes it. This demonization campaign, as usual, was led by the Rockefellers and other rich NWO families who were scared that cannabis would destroy their monopolies, such as the Western medical drug industry.

Clearly, the tides of cannabis perception are turning, and many people have overcome the stigma to explore the vast nutritional and medicinal benefits of cannabis. This article focuses on the healing potential of the preeminent cannabinoid, CBD, the main non-psychoactive constituent of the cannabis plant.

Guess Where Else Cannabinoids are Found?

Before we break down the phenomenal effects of CBD, here is a mind-blowing fact. Cannabinoids aren’t just found in the cannabis plant. They’re also found somewhere closer to home: you! That’s right: the human body itself has an entire system which utilizes cannabinoids. It is known as the endocannabinoid system (“endo” is from a Greek word meaning “within”). In this way, we can distinguish among endocannabinoids (those produced by the human body), phytocannabinoids (those produced by the cannabis plant) and synthetic cannabinoids (the approximately 17 synthetic versions produced by the pharmaceutical cartel). Synthetic cannabinoids, by the way, are Big Pharma’s way of trying to pirate and cash in on Nature by modifying or isolating a natural chemical or compound, making it slightly different to its natural state, getting a patent, then marketing it as a drug with a governmentally enforced monopoly. Some synthetic cannabinoids (such as K2, spice, marinol, etc.) have been taken off the market due to their dangerous nature, but after all, they are part of the Big Pharma business plan, and the greater New World Order synthetic agenda, so what do you expect?

“‘Relax, eat, sleep, forget and protect’ might be some of the messages that are produced by the actions of endocannabinoids, alone or in combination with other mediators …”

The chemical formula for cannabidiol or CBD.

CBD is a miracle compound. Unlike THC, it does not bind to the body’s cannabinoid receptors (CB1 or CB2), so it is not psychoactive and does not produce the high effect. Cannabidiol works through a number of complex mechanisms. Preclinical studies indicate that cannabidiol has the following list of extensive healing properties. The first 5 items on the list below all pertain to cannabidiol’s capacity as an anti-carcinogenic agent:

Anti-Proliferative: CBD stops cancer cells proliferating or reproducing. Many of its effects listed below stem from its ability to activate PPAR receptors. As the article How CBD Works states,

“CBD also exerts an anti-cancer effect by activating PPARs [peroxisome proliferator activated receptors] that are situated on the surface of the cell’s nucleus. Activation of the receptor known as PPAR-gamma has an anti-proliferative effect as well as an ability to induce tumor regression in human lung cancer cell lines.”

Anti-Angiogenic: As the quote above also reveals, cannabidiol can stop cancer cells in another way, by preventing malignant tumors from forming the blood vessels they need to grow. The process of blood vessel creation is called angiogenesis, and since cannabidiol halts this, it is deemed anti-angiogenic.

Anti-Mitogenic: There is a 3rd way cannabidiol prevents cancer. It hinders or stops cell division (mitogenesis). One of the hallmarks of cancer is its unbridled growth, and amazingly, CBD actually stops the cancer spreading out of control by preventing the cancer cell from dividing and reproducing, and thus is deemed anti-mitogenic.

Anti-Metastatic: Metastasis is the process by which a cancer can spread around the body, especially to other organs which have no direct contact with it. Cannabidiol prevents cancer from spreading to other organs, so it is called anti-metastatic.

A closeup view of the cannabis plant, which naturally produces cannabidiol or CBD.

Pro-Apoptotic: Apoptosis is the medical word for programmed cell death. It’s an important part of every healthy and functional cell that it contains a program for apoptosis, so it can commit suicide or let itself die if it is compromised. Cancer cells characteristically do not undergo apoptosis, however cannabidiol is pro-apoptotic and actually induces cancer cells to die. Incredible!

Anti-Psychotic: In addition to showing impressive potential for curing cancer, cannabidiol also exhibits anti-psychotic properties, which means it could help heal a whole host of mental illnesses. As the aforementioned article How CBD Works states:

“CBD’s enzyme-mediated activation of the PPAR-alpha receptor may have antipsychotic effects. Polymorphisms or mutations in the gene encoding PPAR-alpha can result in deficient PPAR-alpha signaling, which has been linked to schizophrenia. PPAR-alpha activation is both anti-inflammatory and can decrease dopamine release, thereby minimizing schizophrenic symptoms.”

Neuro-Protective: Neurodegenerative diseases (such as Alzheimer’s and Parkinson’s) are another set of horrible diseases which are claiming the lives or more and more people. Fortunately, CBD shows potential for healing these too. Again, the issue comes back to the PPAR-activation (same article):

“PPAR-gamma activation degrades amyloid-beta plaque, a key molecule linked to the development of Alzheimer’s disease. This is one of the reasons why cannabidiol, a PPAR-gamma agonist, may be a useful remedy for Alzheimer’s patients. As an aside, PPAR receptors also regulate genes that are involved in energy homeostasis, lipid uptake, insulin sensitivity, and other metabolic functions. Diabetics, accordingly, may benefit from a CBD-rich treatment regimen.”

Anti-Inflammatory: Inflammatory diseases are another massive set of diseases that haunt the populations in developed countries, especially the US. Many nutritional experts and doctors have highlighted the strong connection between inflammation and disease. As Dr. Mark Hyman writes:

“Inflammation is a “hot” topic in medicine. It appears connected to almost every known chronic disease — from heart disease to cancer, diabetes to obesity, autism to dementia, and even depression. Other inflammatory diseases such as allergies, asthma, arthritis, and autoimmune disease are increasing at dramatic rates …”

Analgesic: Analgesic means pain-relieving. CBD is analgesic and is thus indicated for those suffering from inflammatory disease or conditions with chronic pain.

Anti-Convulsant: CBD has become famous for its ability to stop seizures and treat diseases such as epilepsy. The overwhelming consensus of case studies, surveys and pre-clinical animal studies shows that cannabidiol is a powerful anti-convulsant. For a sampling of the studies done on this, see here and here.

Pro-Anxiolytic: Finally, CBD also helps calms the nerves and reduce or eliminate anxiety, and thus is anti-anxiety or medically speaking pro-anxiolytic. The reason why CBD has this effect is probably due to its activation of the adenosine receptor. Adenosine receptors play major roles in brain and cardiovascular function (regulating oxygen intake and blood flow), as well as having anti-inflammatory effects throughout the body, which ties in with CBD’s anti-inflammatory properties. 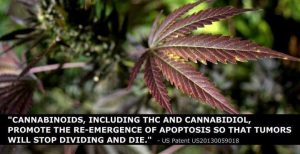 For those wanting a little more information on how cannabis kills cancer cells, I recommend watching a few of these short videos. The 1st video shows how and why cannabis curse cancer. The 2nd video is an interview with a man called Dennis Hill, a survivor of stage IV prostate cancer. Dennis reveals how our bodies make cancer cells all the time, but our immune system (which includes the endocannabinoid system) can normally handle them. However, when the immune system is compromised, it gets behind on killing cancer cells.

Cancer cells have distorted or damaged DNA. Luckily, when a cell turns cancerous, the number of cannabinoid receptors in the cell increases. The body uses its endocannabinoid anandamide to stimulate the production of ceramide, which kills cancer cell mitochondria, starving the cancer cell. The ceramide is intelligently guided; it somehow “knows” to kill damaged cells only and leave the healthy ones intact, much like the way vitamin B17, amygdala or laetrile works to selectively target cancer cells too.

The Future of CBD Oil: Made Without Solvents

Rick Simpson, the Canadian hero who made CBD-rich cannabis oil, gave it away for free and healed many people, came up with a form of CBD oil where he used a solvent to extract it. However, there are now many companies who are producing high-quality CBD oil from non-GMO, non-pesticided hemp, which they then decarboxylate (turn the acidic forms of the cannabinoids into the non-acidic forms, i.e. turn CBDa into CBD and THCa into THC, etc.). I believe in the future, due to the unstoppable momentum of cannabis oil, medical marijuana will become completely decriminalized and legalized, and people all over will have access to high therapeutic grade CBD oil which contains no THC or psychoactive agents.

Conclusion: Let’s Explore the Many Uses of Cannabis and CBD Oil

There are no coincidences in our world – only magic, mystery, synchronicity, conspiracy and connection of which we are often unaware. The sheer fact that our body has its own endocannabinoid system, parallel to the phytocannabinoid system of the cannabis plant, is a fact of key significance and beyond mere coincidence. Call it what you want – cannabis, hemp, marijuana, pot, weed, ganja or kush – this plant has massive potential as a first-class healer extraordinaire. It’s time for all of us around the world to study and use this plant for the bounty of benefits it offers, including making paper, textiles, cloth, rope, oil and fuel, as well as for its nutritional benefits (hemp seed, hemp seed oil) and medical benefits (CBD oil). It has already saved people’s lives. Imagine what else it can do …

Makia Freeman is the editor of The Freedom Articles and senior researcher at Tools For Freedom, writing on many aspects of truth and freedom, from exposing aspects of the global conspiracy to suggesting solutions for how humanity can create a new system of peace and abundance. An avid promoter of freedom, truth and health, his mission is to expose the truth, raise awareness about the conspiracy to enslave mankind and to help create a critical mass of people to stand up against it – and thus restore peace and freedom to the world.

Donna and Hieu plug back in with me tonight to chat about  the live life claim and the incredible matrix like system that totally saturates every corner of our lives. You can find Hieu’s website here and can also contact him through the website if needed.  YouTube channel can be found here Related Posts:Covid cures[…]