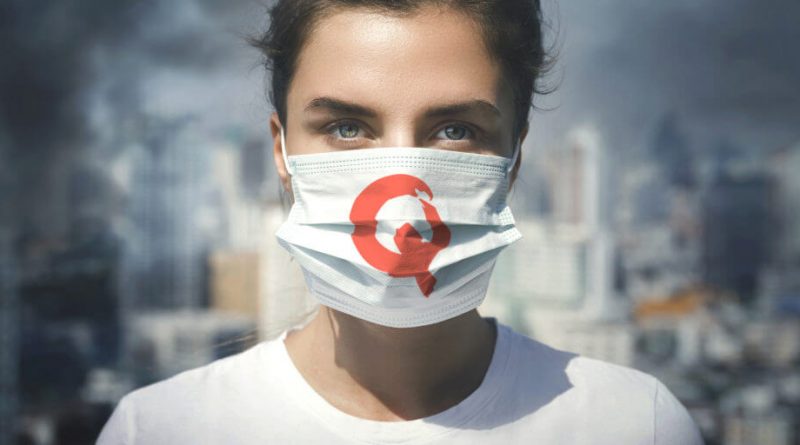 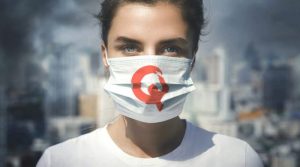 In May 2018, investigative journo Suzie Dawson posted a series of tweets describing the QAnon movement as an intelligence operation. 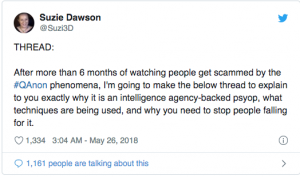 Dawson believes QAnon “revelations”—most notably the PizzaGate farrago—consist of information that is not “in any way a meaningful threat to the supremacy of the intelligence agencies of the United States.” Dawson writes that intelligence agencies “are not launching public manhunts for Q like they did for Assange & Snowden.”

However, after Dawson tweeted the above nearly two years ago, the FBI—long the ruling elite’s political police—has focused on QAnon as a supposed domestic terrorist threat.

Last May, the FBI “identified conspiracy theories, including those espoused by QAnon, as a domestic terrorism threat,” The Washington Times reported. “Both Pizzagate and QAnon conspiracies have been linked to acts of violence.”

According to Yahoo News:

The FBI intelligence bulletin from the bureau’s Phoenix field office, dated May 30, 2019, describes “conspiracy theory-driven domestic extremists,” as a growing threat, and notes that it is the first such report to do so. It lists a number of arrests, including some that haven’t been publicized, related to violent incidents motivated by fringe beliefs.

Late last month, a post on 8kun—the resurrection of the imageboard 8chan taken down after a “manifesto” attributed to the El Paso shooting appeared there—implied COVID-19 is a bioweapon created to derail Trump’s reelection.

According to Media Matters, a partisan Democrat operation funded by George Soros:

The “Q” post’s spread comes as supporters of the conspiracy theory have been using social media platforms to spread falsehoods about the virus being some kind of false flag by the “deep state” for population control or a “military operation” to target supposed elites. They have also promoted dangerous false cures for the disease such as drinking bleach…

Since then, the post has spread throughout Facebook groups and Twitter among QAnon supporters, where it has received thousands of engagements combined, being cited for proof that “the virus is a Cabal weapon” and a “false flag” that “democrats look suspiciously responsible for.”

Suzie Dawson tweets the sort of partisan, pro-Trump “insider” information put out by QAnon directs “energy straight back into the conventional two-party political paradigm,” and as such does not threaten the ruling elite.

It is now well established that questioning the origin and severity of COVID-19 is strictly taboo and possibly dangerous. The QAnon narrative—that Asians were more susceptible to the virus and white people were immune—appears to be custom-tailored to fit the liberal establishment argument that any deviation from the government script on a number of issues is not only dangerous but represents a white supremacist domestic terror threat, never mind multiple instances of the state running white supremacist psychological operations (most notably Hal Turner, the FBI’s infiltration of the Ku Klux Klan, and other groups).

“The FBI once called conspiracy theories spread by QAnon and others a ‘potential domestic terrorism threat.’ It’s time to call the infodemic a public health threat,” writes “PhD candidate” Marc-André Argentino for the highly partisan and vehemently anti-Trump website Salon. 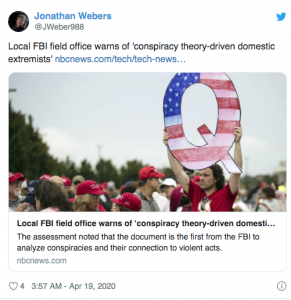 Suzie Dawson’s QAnon “Pied Piper” is likely an FBI insertion. If we look back at the documented history of COINTELPRO, we see how government agents and operatives infiltrated and destroyed political groups.

“The FBI justified the deployment of the draconian COINTELPRO operations to prevent Communist infiltration of ‘legal mass organizations’ but primarily of domestic groups that dissented from government policy,” writes Pedro Caban. “COINTELPRO employed illegal and legal covert measures to ‘neutralize’ and destroy organizations that the FBI identified as a threat to national security.”

Activists “were ‘neutralized’ by intimidation, harassment, discrediting, snitch jacketing, a whole assortment of authoritarian and illegal tactics,” notes Paul Wolf and others in COINTELPRO: The Untold American Story.

Many counterintelligence techniques involve the use of paid informants. Informants become agents provocateurs by raising controversial issues at meetings to take advantage of ideological divisions, by promoting emnity with other groups, or by inciting the group to violent acts, even to the point of providing them with weapons.

The FBI’s use of illegal and unethical tactics was investigated by the Church Committee in the 1970s, and although the agency insists it dismantled the operation following congressional revelations, there is evidence the operations have continued to this day.

“In a stunning revelation from the Partnership for Civil Justice Fund (PCJF), it appears that COINTELPRO is alive and well. Through a Freedom of Information Act (FOIA) request, PCJF was able to obtain documents showing how the FBI was treating the Occupy Wall Street (OWS) movement, from its inception, as a potential criminal and domestic terrorist threat,” Tom McNamara writes.

In regard to the subversion and destruction of OWS, Todd Gitlin writes:

How many demonstrations are being poked and prodded by undercover agents? How many acts of violence are being suborned? It would be foolish to say we know. At least equally foolish would be to trust the authorities to keep to honest-to-goodness police work when they are so mightily tempted to take the low road into straight-out, unwarranted espionage and instigation.

However, it is a documented fact the FBI has used informants (including criminals) to instigate fake terror attacks.

“This is pre-emptory prosecution: targeting citizens not for their criminal behavior but for their political views,” writes Glenn Greenwald.

It’s an attempt by the U.S. Government to anticipate who will become a criminal at some point in the future based on their expressed political opinions—not unlike the dystopian premise of Minority Report—and then exploiting the FBI’s vast financial, organizational, and even psychological resources, along with the individuals’ vulnerabilities, to make it happen.

It is irrelevant if QAnon is homegrown or a manufactured enemy. The national security state and its intelligence agencies are determined to demonize and criminalize any “wrongthink,” not only in regard to a suspicious and misreported viral pandemic, now in the process of normalizing tyranny by the state. The scarlet letter of extremism and terrorism will be affixed to all who counter official narratives.