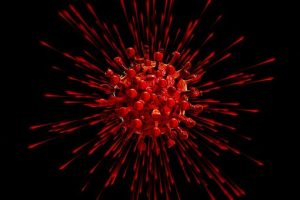 It’s a con as old as the hills. The ancient chieftain of a little territory looks out across his domain and says to his top aide, “You know, we have these clusters of people worshipping different gods. That’s not good for business. Our business is CONTROL, so we need UNITY. Make up the name of some god, and go out there and sell it. Takedown those little shrines and tell all the people they have to believe in the new deity. Use force and censorship when necessary. Later on, I may decide I’M really the name you chose for the new god. We’ll see. If you have any trouble right away, call me on my cell. I’ll be out sunning by the pool.”

Unity of thought. That’s what controllers are after.

In the case of this fake epidemic, the population must view WHAT IT IS in the way public officials and the press are describing it. Dissenting analysis must be pushed into the background.

Here is a 4/9 Bloomberg News headline: “5G Conspiracy Theory Fueled by Coordinated Effort.” [1] A sub-headline states, “Researchers identify disinformation campaign but not source.” The article begins: “A conspiracy theory linking 5G technology to the outbreak of the coronavirus is quickly gaining momentum…”

Obviously, such wayward thinking has to be stopped. And down further in the Bloomberg article, we have chilling news: “Some social media companies have taken action to limit the spread of coronavirus conspiracy theories on their platforms. On Tuesday, Google’s YouTube said that it would ban all videos linking 5G technology to coronavirus, saying that ‘any content that disputes the existence or transmission of Covid-19’ would now be in violation of YouTube policies.”

“In the U.K., a parliamentary committee on Monday called on the British government to do more to ‘stamp out’ coronavirus conspiracy theories, and said it was planning to hold a hearing later this year at which representatives from U.S. technology giants will be asked about how they have handled the spread of disinformation on their platforms.”

Independent analysis of the “epidemic” hangs in the balance. The masters of control want to maintain an information monopoly.

It goes without saying that, in order to achieve this monopoly, detailed surveillance of Internet content is necessary.

Another type of surveillance is also part of the squeeze play. Apple.com has the story (press release, 4/10) [2]:

“Across the world, governments and health authorities are working together to find solutions to the COVID-19 pandemic, to protect people… Since COVID-19 can be transmitted through close proximity to affected individuals, public health officials have identified contact tracing as a valuable tool to help contain its spread. A number of leading public health authorities, universities, and NGOs around the world have been doing important work to develop opt-in contact tracing technology.”

“To further this cause, Apple and Google will be launching a comprehensive solution that includes application programming interfaces (APIs) and operating system-level technology to assist in enabling contact tracing. Given the urgent need, the plan is to implement this solution in two steps while maintaining strong protections around user privacy.”

“First, in May, both companies will release APIs that enable interoperability between Android and iOS devices using apps from public health authorities. These official apps will be available for users to download via their respective app stores.”

“Second, in the coming months, Apple and Google will work to enable a broader Bluetooth-based contact tracing platform by building this functionality into the underlying platforms. This is a more robust solution than an API and would allow more individuals to participate, if they choose to opt in, as well as enable interaction with a broader ecosystem of apps and government health authorities. Privacy, transparency, and consent are of utmost importance in this effort, and we look forward to building this functionality in consultation with interested stakeholders. We will openly publish information about our work for others to analyze.”

“All of us at Apple and Google believe there has never been a more important moment to work together to solve one of the world’s most pressing problems. Through close cooperation and collaboration with developers, governments and public health providers, we hope to harness the power of technology to help countries around the world slow the spread of COVID-19 and accelerate the return of everyday life.”

If you believe citizen privacy is an utmost concern in the minds of Google and Apple, I have condos for sale on the far side of the moon.

The tracing tools appear to involve a very rapid expansion of Snitch Culture. What else are “opt-in users” going to communicate about? The weather? Lunch?

“Dear Relevant Users and Public Health Officials: Yes, I know Marty. Sad to hear he’s been diagnosed with COVID-19. I did have a brief meeting with him just prior to the lockdown. I suppose I might be infected. I should get tested right away. Let’s see, who else was at the meeting? Marty’s brother, Felix, and Carrie, who is Felix’ on and off girlfriend. Six months ago she was tested for an STD, I don’t know the results—Sandy, the broker at Wilson and Wise was also at the meeting—OMG, that could mean the whole company is infected—and Sandy’s dog Tootsie—can animals spread the virus?—then there was a janitor who came into the room, I think his name is Al. He lives down near the docks. He has a brother who I hear is a drug dealer and a compulsive gambler. He owes money to some nasty people, I think…Anything I can do to stop the spread of the virus, let me know…”

Enlist the citizenry to act as spies on each other. A useful tactic.

It rips the fabric of social trust.

It exposes people to government intervention.

It cements the UNITY DICTUM: the epidemic has only one portrait, and the population must bow before it.

For every ten they censor, a hundred must spring up.

Nothing is riding on this except the immediate future—freedom, slavery, medical dictatorship, a borderless planet operated as one super-corporation, the individual vs. the collective, the energy of the individual soul.

Or people can say doom is upon us and nothing can be done about it.

Or people can sit at home and suck on the lockdown lollipop.

In Ohio, there is a protest:

2 thoughts on “COVID: The squeeze play on the population”