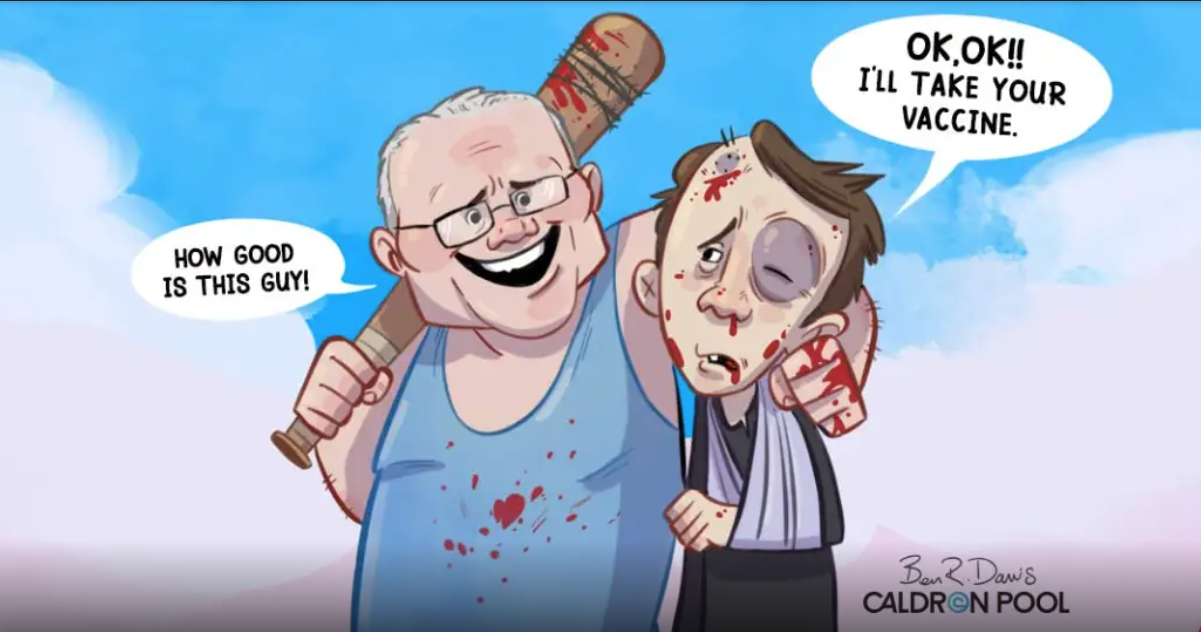 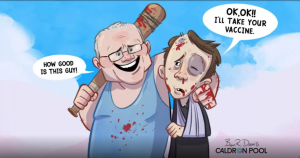 “By forcing our hand, the government has turned my family’s strong resistance to vaccine mandates into a fight for survival.”

Like many Australians, my wife and eldest daughter are being forced to get “vaxxed” in order to keep their jobs and successfully finish two years of study.

They are victims of totalitarianism, and I’m as mad as hell about it.

By forcing our hand, the Government has turned my family’s strong opposition to totalitarian anti-covid measures into a fight for survival.

The Government is forcing our hand because, like a large number of Australians without land of their own, we can’t refuse the vax, then “live off the land”.

Additionally, sacrificing jobs for the “cause” would mean no reimbursement for holidays or long-service owed, no chance of future employment.

It would also mean being held back from receiving government support because they are deemed “able to work, but unwilling to do so.”

We lean hard on our faith and could live on beans, rice and fickle charity, but we’d be living without shelter while doing so.

For me, being forced out of a job means being forced back into the abusive generational welfare cycle I’ve spent my entire working life trying to liberate my family from.

This would be a soul-crushing move back into total government dependency.

Even then any fall-back onto the Australian taxpayer would until the pre-requisite for Centrelink became “no jab, no pay” (a policy implemented by the “the vax is voluntary” hypocrites in the current government back in 2016. One that very well could be extended to the COVID-19 “vaccines”).

In effect, my family would have been forced out of work. Only to find ourselves being forced into getting “vaccinated.” In order to keep welfare payments, we were forced to become dependent on.

Since August, when the subjective Education decrees were issued, we’ve agonised over our response to the current regime’s abuse of power.

After the New South Wales Supreme Court loss last Friday, we were hit with the urgency of having to redraw the line in the sand.

We were forced to establish a new frontline.

It was either do this or face becoming totally dependent on an authoritarian government, who are already walking all over us, with their blitzkrieg fanatical takeover of medical autonomy.

My wife and daughter have no choice.

As Bob Cotton’s recent Caldron Pool piece spectacularly-illustrated, there is zero informed consent at play here. The government, with the support of big media, and a gullible public, have made it so.

There is no way to maintain the same level of resistance. So, our non-compliant approach has to change.

Non-compliance is not new to us. It began for me in resisting an abusive father and the generational welfare cycle – one which is not much different to the authoritarianism we’re seeing today.

I was the first in my family and extended family to finish high school and attain the Higher School Certificate, and later a college degree.

This divergence from the dysfunctional norm culminated in the revolution of baptism.  It manifested in getting married young, staying married and having five kids.

This non-compliance made me few friends, when managing a Christian bookshop for over a decade, I preferred to recommend customers buy Keith Green, not Joel Osteen.

This lifestyle of non-compliance resonates throughout my family’s 12-years of homeschooling.

My point is, for those in the same position as my family, there are many tones, shapes and paths to non-compliance.

There’s little chance of victory if the unvaxxed are discouraging and demoralising those who are forced to get vaxxed into not participating in both prayer and protest because the unvaxxed entertained the sin of self-righteous posturing.

We can’t play the same segregation game. If we do all is lost. Faith in the face of oppression involves sighing with the wounded, not self-promotion.

In other words, people shouldn’t be forced to drop out and give up because someone told you that being “vaxxed”, “unvaxxed”, or being forced into getting the “vaxx” somehow disqualified them from participating in pro-freedom prayer and protest.

The rape of medical autonomy by an authoritarian power that has no checks or balances doesn’t bode well for ALL Australians.

Nothing’s changed in regards to my and my family’s convictions.

I’ve given my all to this fight, and I’ve been doing so since at least March last year via Caldron Pool. (See my piece dated March 2020: ‘Are oppressive totalitarian measures necessary in order to fight against coronavirus?’)

I’d much prefer being in a better position to oppose this madness. Despite how much we’ve prayed, asking God to power alternatives, we’re not able to continue resisting responsibly.

I’ve made and continue to make sacrifices, turning up, even if, and when haters attack, or people simply just don’t tune in.

Another household family member is currently without work because she’s not “vaccinated”.

COVID-19 required a scalpel, the government used an axe!

I take no pride in the “vaccines” or being forced down this pathway. I detest the slimy smiles from politicians, who, accompanied by TV Doctors, boast about their smoke and mirror schemes.

The Australian Prime Minister is the worst of the lot. Scott Morrison had the chance to be a statesman, he chose middle-management instead.

“Scott Morrison is impotent…He’s too gutless to admit the Constitution forbids the Commonwealth from authorising civil conscription with respect to medical services, so he lets the states and territories trample all over our right to choose, take away our jobs, separate our families and isolate our communities.”

One of the greatest lies imposed on the Australian people by Scott Morrison is his assertions that the Covid-19 vaccines are voluntary.

My family and I had every hope that the NSW supreme court would reject the vaccine mandates and uphold the Australian constitution’s ban on medical conscription. When the aloof, government-appointed, Justice dismissed the cases, we had to respond with plan B.

While some of us are being forced into getting the “vaccination,” we don’t do so quietly. By sticking with a policy of responsible resistance we are still acting in a way that honours God.

This means acknowledging, as I have above, our limitations, and fighting back within our means.

Thus, being capable of fiercer non-compliance because we’ve regrouped and closed a few fronts we were no longer capable of fighting on.

We do this in the full knowledge that for those living under the Lordship of Jesus Christ, what looks like defeat, can be the birth of a greater victory.