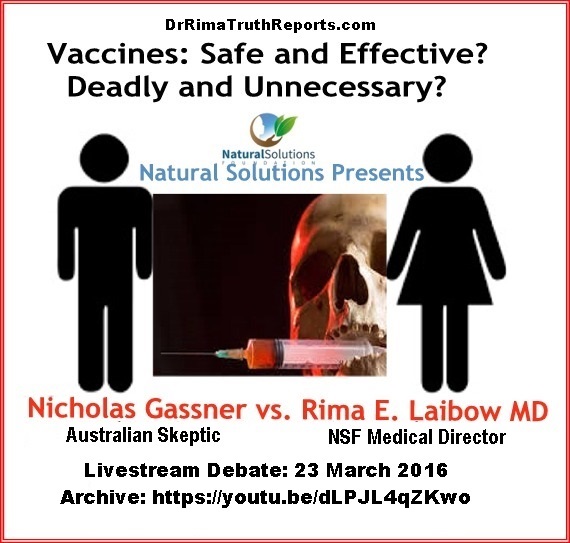 Are Vaccines Safe and Effective or are they Dangerous and Unnecessary?

Note: My personal opinion is that Mr Gassner is nothing more than a ridiculous clown who had absolutely no business participating in this debate. Mr Gassner not only made the pro-vax cult look foolish but was unable to offer anything credible or interesting here which is very typical behaviour in the pro-vax movement. I do not know what Mr Gassner’s true intentions are but i do know that he was utterly destroyed in this debate by Dr Rima, this was expected anyway.

I am writing an after-action report on the live stream 2 hour debate that we just concluded.

Nick, you seem like pretty much a “Joe Regular” [see below] but I have to wonder if you have some problems that we should take into account or if you are just deeply duplicitous and disingenuous, perhaps a liar or, sadly, an unscrupulous person as I understand at least some of the Australian [so-called] Skeptics to be.

During our debate, sadly, you did not produce any facts, only the old, unsupported bromides.  The page you presented as the place to go for a balanced look at vaccines is filled with both lies and distortions. See my line by line deconstruction of it at LINK. There was nothing balanced and precious little that was accurate except a passing nod to the only things that actually HAVE reduced infectious disease morbidity and mortality, sanitation, hygiene, improved diet, clean water and education.  But just a passing nod.

You see, here’s what you wrote to me when you complied with my request to give me a bio and tell me what you wanted to focus on after you told me you live in Canberra, you work with kids with disabilities and you are in graduate school:

“Nicholas has a twin brother who required substantial hospital care in his youth. This coupled with the contact he receives from parents and children in his occupation brought him into the vaccine debate. While he is a passionate pro-vaxxer. He wishes to promote positive discourse to help bridge the divide between two groups that both share an ultimate objective: the safety and safeguarding of children and adults from diseases that are in the process of being eradicate or have the potential too.” [Emphasis added – Dr. Rima]

Well and good, aside from the poor grammar, sentence fragments and such, but here is what you wrote on your FB page:

“I agree wholeheartedly that doing something like this gives people like her gives her exposure thats [sic] un-deserving.

I suppose my rationale is we get to expose the lunacy through another medium. I do not hold high hopes that this discussion will go to plan and for all intents and purposes could degrade itself into another fest of ad hominem remarks and whatnot. [Emphasis added – Dr. Rima]

Note from Dr. Rima: another fest?  With whom have you had such fests and who was making the ad hominem remarks; what does ‘whatnot’ refer to here?]

“My contingency plan is to hold the high ground. If I frustrate them enough that they can only bury me by abusing me, I’ve won. And the discussion ends. There will be

no recourse for them to come back. If it acts unfavourably to them they may not even show the video. [Emphasis added – Dr. Rima]

Note from Dr. Rima: Just exactly how does this square with your letter to me which goes on to state

“My focus for this debate is to engage in a positive atmosphere with two sides of a very passionate and contentious subject.While we both come from opposite ends of the fence, it is not the aim to convert each other. Rather, I want to take it as an opportunity to hopefully prove to our respective communities that the argument does not have to be bridled with the toxicity that often comes with debating this topic. It is the objective of myself that both sides can outline our core points of the debate and to find a mutual understanding that even if our methodologies are stark in contrast; our ultimate aims are not. And if we can pioneer such an approach, we can use this as a landing point for future positive discourse.” [Emphasis added – Dr. Rima]

“But I will have a master copy. We will have an on-air resource to prove to other people that AV-ERS and their honchos are not as balanced as they make them out to be.

And if Joe Regular thought they had any validity, it will burn with them.” [Emphasis added – Dr. Rima]

Note from Dr. Rima: Wait. So was your intention then not to have a respectful debate but to actually provide an atmosphere filled with rancor and to “burn” us and our validity? OOOOH, Nick! One would call that lying and entrapment, wouldn’t one? I would.

You continue, “One other thing: I charge a vaccine a minute for my time. If they want to mess me around with Gish gallops, ad hominems, appeals to nature, various logical fallacies” and etc. then at least some good will come out of the nonsense when MMR vaccines get donated in NSF/ Rima’s name. Maybe Ill do that on air too.” [Emphasis added – Dr. Rima]

Note from Dr. Rima: Um, how did that go for you when your vaccine donation was identified as a crime against humanity?  Not quite the impact you were looking for, I would wager.  But you know, it actually is, whether the vaccine is polyvalent or not.  Check out the CDC: vaccines cause the diseases they are supposedly designed to prevent.  I did not put that on their website.  They did.  Check the Polio Vaccine page.

Then, in your letter to me, but not, of course, your FB post, you say,

is. http://www.publichealth.org/public-awareness/understanding-vaccines/vaccine-myths-debunked/”.  I am afraid you failed miserably to find a resource that is not biased in one way and one way only.  I do not know who put that site up, but it is filled with errors and lies.

Tell me, was it the Australian Skeptics or some other similar group because it really is embarrassingly inaccurate.  Were you/they on such a low level financially that no one was available to do the basic research or were you/they on such a low level ethically that lying is perfectly acceptable as long as you make your point, by whatever strategy justifies the desired means, which is to distort the truth about the dangers and problems with vaccines?  Your site, the only reference you provided, is beyond woeful.  It is actually embarrassing.

You know, I fully expected you to have at least SOME references and at least a fact or two.  You did not. Perhaps you are so busy with your job and graduate studies that you did not have the time to muster them.

Or perhaps you knew that the bought-and-paid-for science and cherry-picked facts are very exposed and easy to dispute and dismiss so you were looking for some way to bate us into a low road cat fight.  Were you then surprised when I said that I had a huge number of references to your none?

So which is it, Nick?  Were you hoping to draw us down or were you not prepared with anything to bolster your side?  Or are you really two people and Mr. Nice Guy All In for Reasonable Discourse was the alter writing the email while Mr. Rip Their Heads Off, Take Them Down in Flames was the guy doing the FB posting?

Have you thought about getting some help?

Your FB self goes on to state, amazingly and narcissistically, “She is also not expecting my voice. Which apparently, is a real radio-voice so coming on with that pitch might make her think this isnt some anti-social Internet lurker she thinks Im going to be”

I was, however, wrong. You ARE an anti-social Internet lurker.

I think you need some help and I do hope you get it.

One final thing, Nick, I really like the shade of blue on your headphones.  Very pretty.  Your behavior, on the other hand, was not very pretty at all.

For your convenience, Nick, my response to the [un]unbiased website you provided as your sole reference to bolster your contentions that vaccines are safe, effective, necessary and must be used to protect us from the unvaccinated and their filthy diseases:
[Note: The original text is quoted verbatim. My comments are in blue]

The widespread fear that vaccines increase risk of autism originated with a 1997 study published by Andrew Wakefield, a British surgeon. The article was published in The Lancet, a prestigious medical journal, suggesting that the measles, mumps, rubella (MMR) vaccine was increasing autism in British children.

The paper has since been completely discredited due to serious procedural errors, undisclosed financial conflicts of interest, and ethical violations. Andrew Wakefield lost his medical license and the paper was retracted from The Lancet.

Nonetheless, the hypothesis was taken seriously, and several other major studies were conducted. None of them found a link between any vaccine and the likelihood of developing autism.