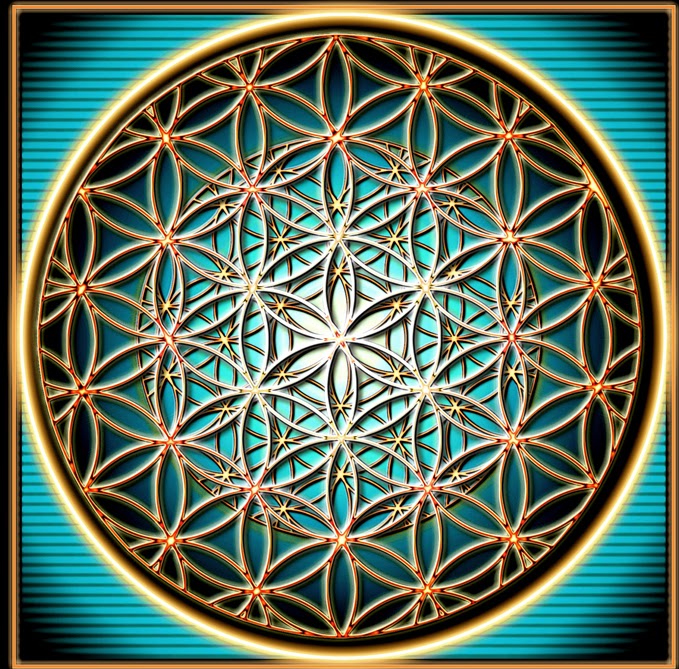 The Flower of Life is most likely something that you have seen before. It is a common symbol of many spiritual and religious teachings around the world.

The Flower of Life has been found all over the world in many different religions. It is one of the oldest sacred symbols known to man. It is a geometrical shape that is made up of multiple overlapping circles of the same size. There is a huge amount of information and knowledge that can be gained from understanding the Flower of Life.

It is considered to be sacred geometry that contains ancient religious value and to sum it up it depicts the fundamental forms of space and time, but there is a lot more to know. Let this be an introduction to The Flower of Life.

The oldest depiction of the flower of life known to man is at The Temple of Osiris in Abydos, Egypt. The symbol here is not etched or carved  into the granite rock, it appears to be burned into the rock.

Many other depictions can be found within many ancient structures in many different countries including: Israel, Turkey, Ireland and many more. A rather interesting depiction of the flower of life is found in The Forbidden City, in Beijing, China.

The Flower of Life is found in a spherical form underneath the paw of the “Fu-Dog,” or more accurately known as the “Guardian Lion.” This palace was home to 24 emperors of the Ming and Qing dynasties. The Fu-Dogs were a symbol of protection to the buildings and their inhabitants and also, they were considered to be the guardians of knowledge. Which is interesting when you consider the spherical Flower of Life symbol that is found under the dog’s paws. The dogs are literally guarding the knowledge.

It was mentioned above that The Flower of Life was considered to be sacred geometry, but what does that mean?

What is “Sacred Geometry?”

Back in the day, certain numbers had a symbolic meaning aside from their everyday use. Various shapes such as triangles, hexagons and octagons are considered a physical manifestation of a number. Because of this, these shapes hold a higher vibrational value because of the fact that they are visible. Because of this Leonardo DaVinci was very interested in the Flower of Life and studied its form and mathematical properties.

This is important because the spiral that this mathematical equation makes can be found in all living things including human beings, plants, animals and even our galaxy, The Milky Way.

The Flower of Life can also be related to sacred geometry by understanding Metatrons Cube. Metatrons cube is the name for a geometric figure that is made from connecting lines from the center of each 13 circles to the other 12 circles. These circles come from the Fruit of Life, which comes from an extended version of the Flower of Life. To understand this more, please check out the video below for a more thurough explanation.

Video from “Spirit Science”  (http://thespiritscience.net/spirit/) This video provides a brief, but detailed introduction to The Flower of Life, The Seed of Life, The Egg of Life, Sacred Geometry and Metatron’s Cube. Check it out!

Understanding The Flower of Life certainly help us to understand how the Universe works. It can be used as a tool for connecting during meditation, and also as a powerful symbol to refer to in your everyday life. Some people even say that having the symbol on your electronic devices can help to diffuse the harmful frequencies that these electronics emit. Overall, It is a wonderful reminder that we are all connected, to each other and every single thing in the Universe.