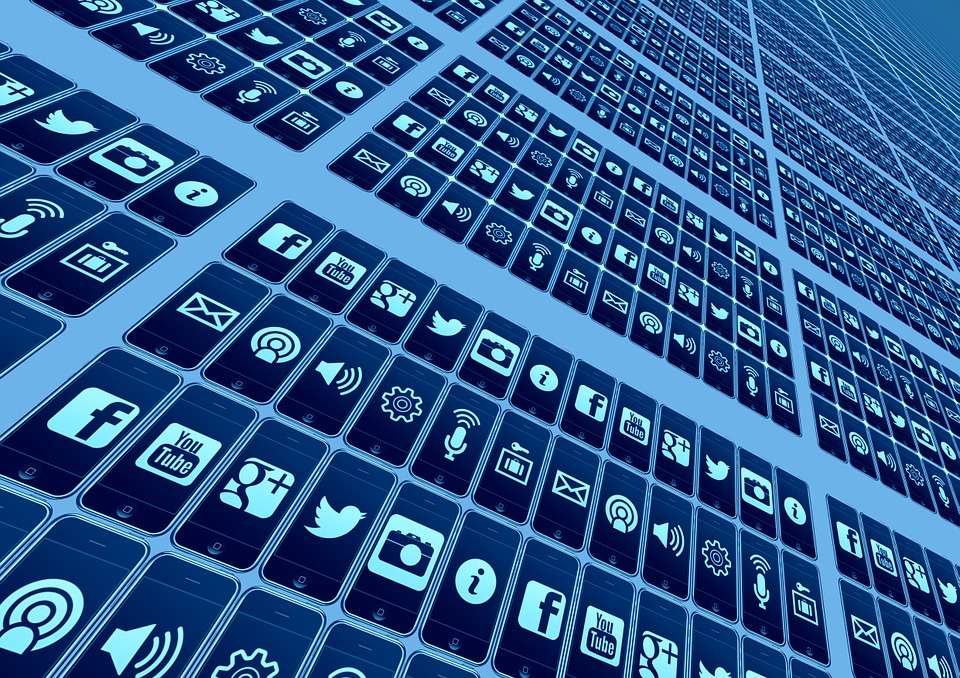 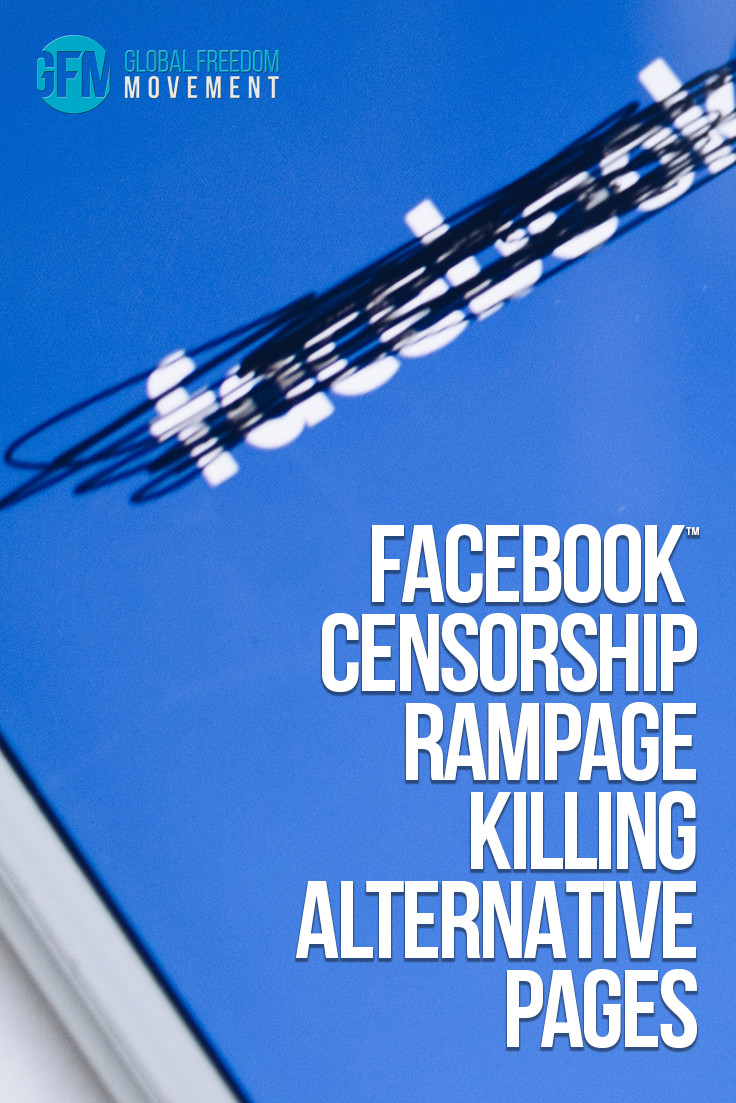 It’s official: the Facebook censorship rampage against truth and “alternative” perspectives is in full swing!

Our Global Freedom Movement (GFM) fan page is just the latest casualty in the infowar that we are aware of.

In the early hours of Tuesday morning (AEST) while we slept, Facebook evidently decided it was an opportune time to delete the page—with no prior warning whatsoever.

We awoke to see that not a single trace of the GFM fan page could be found anywhere in Zuckerberg’s Deep State-controlled platform. (Note: We have created another page with our name but will not be posting on it. We’ll only get burned once…)

No reason was provided. No responses to inquiries have been forthcoming. (Classy stuff, Facebook.)

It’s not just Global Freedom Movement in the sites of the Deep State proxy known as Facebook, however, which is why I’m writing this article. A wide net is being cast.

This past month (June 2018) has seen a spate of sudden page deletions of pages – some of them with huge followings – for no apparent reason (nothing reasonable offered at any rate). We will continue to report on the names of pages which enter the Facebook graveyard.

Page admin’s have begun connecting more intensely than ever and exchanging horror stories—and it seems that there is a definite pattern at work.

Jake Passi, formerly the admin (and creator) of Collectively Conscious—until Facebook arbitrarily deleted it without warning—shared this with me today in a private communication:

Heart Centered Balancing got deleted about a year ago. It had more than 5 million followers I think.

Awareness Act also got deleted about a year ago. It had 1M+ followers.

[EWAO (Earth We Are One) had their pages removed.] That was in early June of this year. (Emphasis added)

My friend Emeka’s page Chocolate Socrates got deleted on the same day. It had more than 500K followers.

Truth Teller and March Against Monsanto among many other pages keep getting hit with restrictions mainly on links. Zero reach bans they are called.

March Against Monsanto has been restricted for more than 2 weeks now and we have no idea when the restriction will lift.

Big pages like The Free Thought Project and The Mind Unleashed are getting their articles “debunked” by fact checkers like Snopes and Associated Press. Once two articles get “debunked” their pages get throttled [by the algorithms].

This is just the tip of the iceberg. There is so much more insanity going on that I could share but I’ll leave it at that for now.

Primarily, the pages we are seeing deleted belong to the “alternative media” community, that is, anyone who shares information that does not support the established mainstream narratives—regardless of the topic! If you don’t toe the Deep State, military-industrial complex, or Big Pharma line then you’re out! 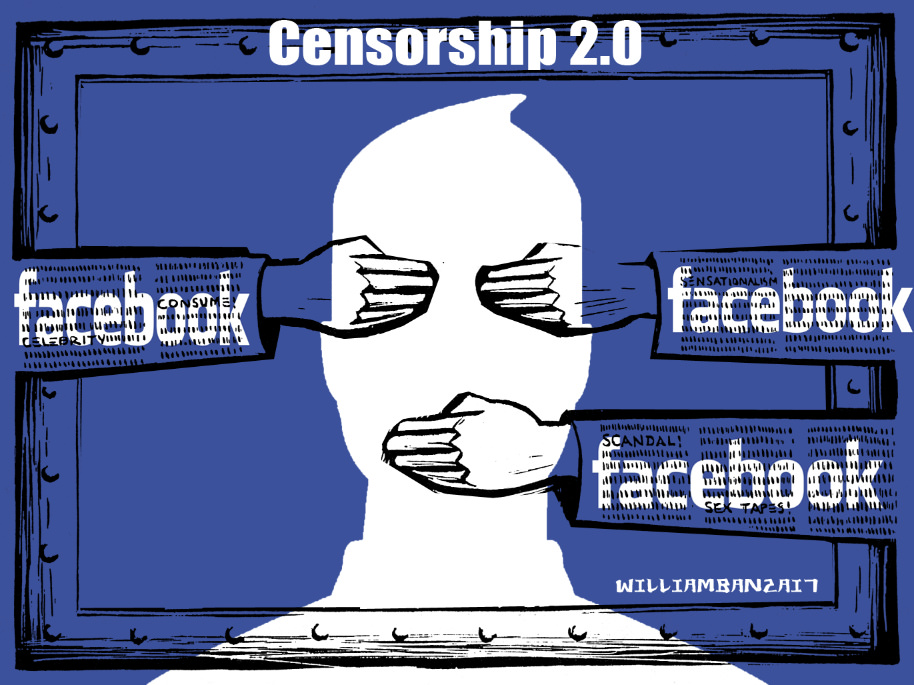 A democratically functioning platform with a diversity of perspectives is surely not something the Deep State will tolerate Facebook being (or ever becoming).

If you want to know the truth about anything, you’re less and less likely to find it on Facebook due to the current Gestapo-like crackdown on pages not in line with the Establishment.

The grotesque reality is that Facebook doesn’t give a damn that years of hard work by page creators is being callously deleted in an instant without recourse. They don’t give a damn that businesses are being ripped apart by their acts of censorship violence.

Even pages about meditation are taboo! I personally know of one page creator (I won’t name the page) who grew his meditation-related page to over 1 million fans and then sold it to a new owner for a tidy profit (a couple of years ago, if memory serves me, well before the current blitz began). I wonder how the purchaser of said page feels since Facebook deleted it in early June for no reason.

Lives are being devastated and people are rightfully pissed off.

Pages deleted without a trace, as if they never existed.

Hopefully we’ve all learned a lesson or two.

The End of an Era?

In Facebook terms, this may be an extinction level event: independent news outlets are going the way of the dinosaurs and leaving for other platforms (more on that in a moment).

But the joke may yet be on Facebook itself as it betrays its true allegiance and agenda ever more clearly by the hour, cleaving away swathes of truth-based pages in favour of a homogenised, Deep State-approved echo chamber of official narratives (curated by laughable, discredited entities such as Snopes).

Put simply, more and more people are seeing Farcebook for what it is and looking for greener pastures. What Facebook doesn’t seem to realise is that by alienating and/or censoring literally tens of millions of its users by blackballing alternative pages and arbitrarily banning users in the “truth community”, it’s cutting off its own legs.

People are sick of it and they’re leaving (and there goes the ad revenue with them – and with that, shareholder confidence!).

Once Generation Y (and older generations) leaves Faceblock for good, it’s game over for Zuckerturd—ain’t no “Gen Z’s” coming in to replace us. Most in the younger generations avoid Facebook for various reasons, including not wanting to be on a platform their parents use.

Put simply, the younger generations aren’t interested in Facebook and they certainly won’t be coming in to spend millions of dollars in advertising on the platform and replace the lost funding.

Facebook’s reputation is further tarnished by the day and it has no one to blame but itself. The more tyrannical it gets the more people regard it with contempt and the less likely they are to stay.

This is Facebook in self-termination mode, on behalf of the Deep State.

As we transition out of the Kali Yuga (iron/dark age) and into a more conscious age in alignment with truth, if you kill the truth you kill yourself. That seems to be Facebook’s lot currently.

Lost Your Page Too?

If you’re a fellow victim of the Facebook censorship rampage, we want to know about it. Send us your details—page name, deletion date, number of followers, and any other pertinent info—via this contact form.

What Other Platforms Are We Using?

There are social platforms where the cognitive and social grass is a little greener.

While we prepare for the launch of the Global Freedom University (the Truthiversity), Global Freedom Movement will continue to maintain the GFM Freedom Tribe group and Aimee and I will maintain our personal profiles too, until the day finally arrives when we no longer feel the need to.

In the meantime, GFM and some of its allies have new accounts on Minds (which we like the look and feel of!) and OnStellar – connect with us there!

And if you really don’t want to miss any of our essential goings on, you’ll want to join the GFM mailing list too! At least then we can let you know what our strategic moves will be and when, without Faceban’s interference.

Please share this article widely, especially on the other social sites! (Oh, and by the way, our uncensored Twitter alternative is Gab—find GFM’s Gab profile here.)

See you on the socials.