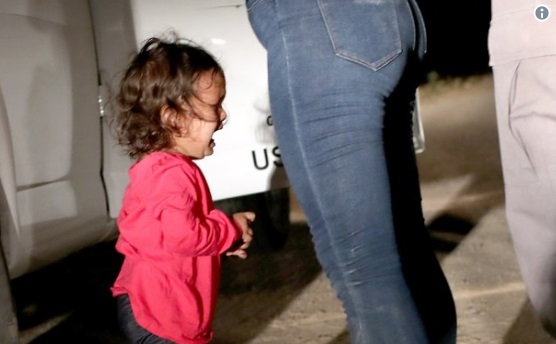 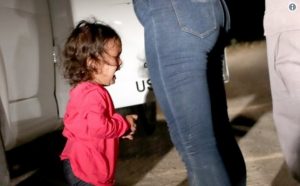 The now-infamous “family separation” photo you see below, taken by John Moore and licensed by Getty Images, has become the emotion-infused rallying cry for fact-devoid Leftists to demand unlimited open borders that would flood the United States with illegals.

It has now emerged that the photo is “fake” in the sense that the girl wasn’t separated from her mother at all. Young girls cry for a million reasons: They’re sleepy, they want more ice cream, they don’t like the food, and so on. But the deceptive left-wing media claimed this girl in particular was crying because she was forcibly separated from her mother by U.S. Border Patrol.

That claim, we now know, is a complete lie.

But it fits the convenient narrative of the insidious Left — which cares nothing about actual facts — and so the photo has been widely circulated on Fakebook and even used to raise nearly $20 million in donations for pro-open borders front groups (see below). The people who donated money to the campaign were duped, of course. The photo is a “fake.” The girl was never separated from her mother. The entire fundraiser is fraudulent, fake news. 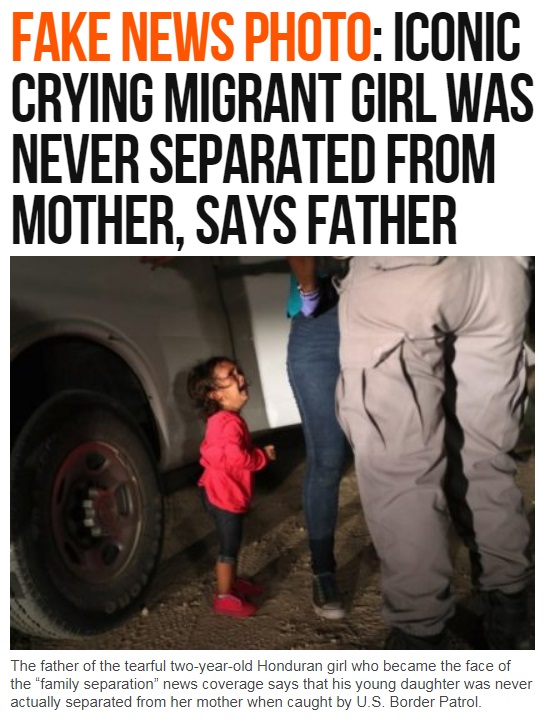 The father of the tearful two-year-old Honduran migrant girl who became the face of the “family separation” news coverage says that his young daughter was never actually separated from her mother when caught by U.S. Border Patrol. Instead, he says, his daughter and her mother are together in U.S. custody at “at a family residential center in Texas.”

Denis Javier Varela Hernandez, 32, told the UK Daily Mail that his wife Sandra, 32, had taken their daughter, Yanela Denise, on a dangerous journey to the U.S. on June 3 without telling him. They had since been in touch, he said, and he learned the two had been detained together but never separated.

Getty Images photographer John Moore took the famous photograph of Yanela Denise standing on the ground and looking up in tears while a McAllen, Texas, Border Patrol agent searched her mother next to a patrol vehicle.

The image spread like a California grassfire. Time Magazine used a cutout of the little girl on its recent cover, where she was depicted confronting President Donald Trump.

Multiple news outlets used the photograph as a symbol of the pain of families being separated by U.S. government officials. A Facebook fundraiser that used the photograph to solicit funds to help reunite families has already raised nearly $20 million, becoming the single largest crowdfunding campaign in the history of the social media platform.

Getty Images captioned the photograph by indicating that the mother and daughter had been “sent to a processing center for possible separation” (emphasis added).

Now, Hernandez says that his wife and daughter were never separated by Border Patrol agents and that they remain together.

Hernandez also told the Daily Mail that he did not support his wife Sandra’s decision to leave their home and travel through dangerous conditions to seek political asylum in the U.S.: “I didn’t support it. I asked her, why? Why would she want to put our little girl through that? But it was her decision at the end of the day.

“I don’t have any resentment for my wife, but I do think it was irresponsible of her to take the baby with her in her arms because we don’t know what could happen,” he told the Daily Mail.

He said she had talked about going to the United States for a “better future” but she did not say she had made the decision to take the 1,800-mile trip — paying a “coyote” smuggler $6,000 to take them.

Here’s a recent photo of the family riding in what appears to be a luxury vehicle, with the mother smiling and the daughter riding along: 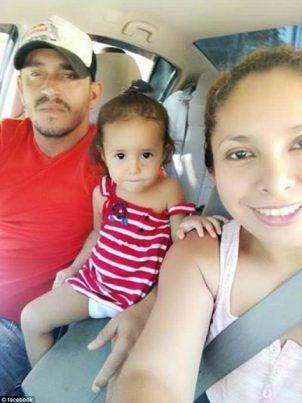 Fakebook allows “fake” photo to raise $20 million, openly supporting a fraud while claiming to be cracking down on “fake news”

Facebook says it is in the midst of a fight against “fake news” on its platform, but has allowed activists to raise nearly $20 million for migrants using a photo that is incorrectly said to show a daughter being separated from her mother.

The fundraiser, “Reunite an immigrant parent with their child,” asks Facebook users to donate money to RAICES, a charity described by USA Today as “a Texas nonprofit that helps families with legal advice and translation services.

The donation page for the fundraiser uses a now-iconic photograph of a two-year-old girl crying as her mother is searched by U.S. Border Patrol. The mainstream media presumed that the girl and her mother were separated.

However, news broke Thursday that the mother and daughter were never separated, and were in fact in U.S. custody at a family residential facility in Texas.

Furthermore, it emerged that the mother had been previously deported in the U.S. According to her husband in Honduras, she left him and three other children in early June without informing him, paying $6,000 to a “coyote” smuggler to take her northwards so she could seek better economic opportunities.

The photograph, by John Moore of Getty Images, is real — and Getty only claimed that the mother and daughter had faced “possible separation.” However, the story the media and activists had woven around the image is not accurate.

Behind every Democrat agenda is a staged or “faked” narrative

Once again, we’re seeing how fakery and the engineering of false hysteria is the bedrock of everything Democrats and Leftists try to pull off. In every case of mass outrage or hysteria from the Left in recent memory, there are staged, scripted or fake elements that are carefully rolled out for the express purpose of deceiving the public.

Publicizing a photo of a girl who wasn’t separated from her mother — while presenting her as the literal poster child of children being separated from their mothers — is the very definition of fake news, and it’s the left-wing media that continues to push all this fake news while absurdly claiming to be fighting against fake news.

The “fake news photo” of this migrant girl is now emblazoned across the cover of TIME Magazine, once again proving how the news establishment is steeped in fake news and false insinuations meant to deceive the public. Here’s how TIME assembled a fake, Photoshopped montage that depicts this child crying and screaming at President Trump. This is fundamentally deceptive, dishonest and another damning example of fake news from a pathetic, left-wing media that has utterly abandoned any obligation to truthful reporting whatsoever: 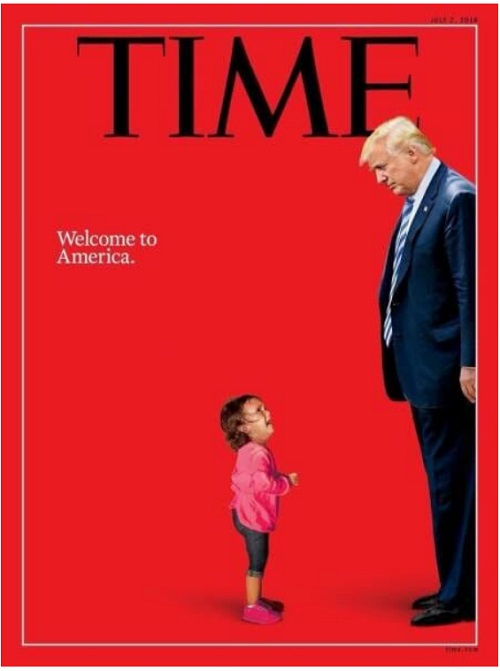 If anything, this TIME magazine cover depicts the behavior of Leftists, who cry and scream at everything in sight, without justification or any actual facts. Leftism has collapsed into episodic derangement on demand, where the lunatic masses break down into mass hysteria exactly when they’re told, triggered by fake photos, fake news reports, fake staging and even fake “crisis” talent who are often filmed by news media to augment the emotional impact of tragic events.

Without fakery, the Left wouldn’t have any real news to report at all. Remember: Everything they report with coordinated focus is fake, staged, augmented, exaggerated or otherwise a theatrical production in one form or another. Read NewsFakes.com to see more examples.

Read more details about this incredible story of fake news from the left-wing media at The Gateway Pundit.