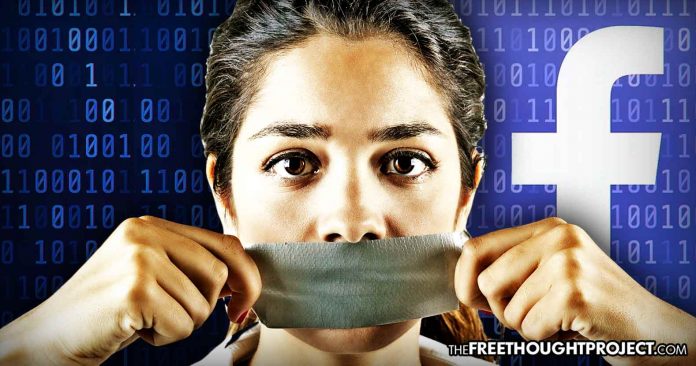 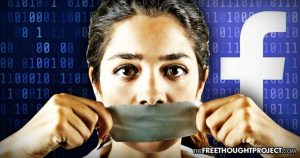 If you have been following the Free Thought Project or our police accountability page, Police the Police, on Facebook, chances are, you haven’t seen our content in a while. This is not due to us cutting back on content creation or reporting. In fact, in recent months, we have stepped it up but thanks to Facebook’s crackdown on information that doesn’t toe the establishment group think line, our information is being seen by increasingly fewer people.

If you have been following the Free Thought Project or our police accountability page, Police the Police, on Facebook, chances are, you haven’t seen our content in a while. This is not due to us cutting back

If you were to visit a page like Occupy Democrats on Facebook, you can clearly see that they violate all the algorithm’s rules against posting too frequently, posting questionable information, and sharing repurposed unoriginal content. If other outlets would manage their pages in a similar manner, rest assured that you would never hear from them as this is a way to ensure no one sees your posts.

Facebook has these algorithm checks in place — they claim — to reduce the spread of spam or inflammatory content. However, Occupy Democrats appears to be given a pass as they toe the Left’s establishment line. Many on the right will look at this and claim that it is evidence Facebook is censoring right wing news while promoting the left, but this is inaccurate.

Case in point: Breitbart. Like Occupy Democrats, Breitbart also clearly violates all the algorithm’s rules against posting too frequently and posting questionable information. And, Like OD, their page receives tens of millions of interactions a day.

Instead of repeating the left’s establishment narrative, Breitbart repeats the right’s, so they are given a pass and are allowed to continue sharing information, even when that information is patently false.

In the meantime, outlets like the Free Thought Project get fact checked on things that are widely accepted as true and our rank in the algorithm diminishes as a result. In the following example, TFTP allowed a member of our Facebook group to post a photo in the group. The photo stated — 100% accurately — that it shows Joe Biden holding hands with a former leader of the KKK, Robert Byrd.

As this was factual information, Facebook’s algorithm or some disgruntled employee made up fake information to claim it was “Mostly False.”

As you can see in the image above, the post was rated as mostly false because it claimed that Robert Byrd was a Grand Wizard of the KKK. The only problem with this rating is that the post never once claimed he was a grand wizard. This was entirely concocted and we received a strike nonetheless. And as a result, less people see our information.

These examples are endless and extremely detrimental to the sharing of information. As the below case illustrates, they can end in permanent bans and deletion of profiles based on completely false information.

A team member of the Free Thought Project, Johnny Liberty had his entire profile deleted and permanently banned and our page, Police the Police received a strike after Facebook falsely claimed we shared nudity. Nowhere in the post does it show nudity. It presented facts only, yet our reach was diminished and Johnny was permanently banned from Facebook for sharing a completely factual article.

It is not just The Free Thought Project either. Our friends at Collective Evolution, Joe Martino and Arjun Walia had their profiles permanently banned by Facebook and subsequently lost admin access to their pages. They were given no reason.

Collective Evolution, who has been around for a decade, may soon see their Facebook page with over 5,000,000 followers, wiped from the face of the internet and the thousands of hours of work into building it will be turned to dust.

Comedian JP Sears, who uses comedy to show the absurd nature of the two-party paradigm has experienced censorship and demonitization as well. Earlier this month, his advertising account was demonitized because he allegedly shared “false news.” As we have illustrated above, there are many examples of this ‘false news’ rating being used to simply silence those who post it, despite the news being completely true.

After Facebook stripped him of his ad revenue, Sears laid out the problem sarcastically, yet with perfect accuracy.

Completely demonetized, as I’m mistakenly not brainwashed by the mainstream narrative. Sorry Facebook, I know it’s not right to accidentally think for myself. I’m working on getting rid of that destructive habit.

In the mean time, I’ll try to be dumb enough to believe that the “independent fact checkers” are rooted in facts rather than an oath to preserve an unfactual narrative.

Other outlets like Mother Jones, who is clearly on the left, have found themselves facing similar censorship. Though they are on the left, Mother Jones frequently counters the establishment narrative like calling out US war crimes.

“You guys were one of the outlets who got singled out to balance the ledger“: That’s what a former Facebook employee told Monika Bauerlein and editor-in-chief of the magazine, Clara Jeffery, as they dug into recent news that the platform was throttling traffic to certain publishers, including Mother Jones.

Last week, Jeffery made it her mission to expose this rampant censorship on the platform, calling Facebook a “garbage company” and a “toxic cesspool” damaging the US.

Like the right incorrectly claims, Jeffery incorrectly assumes that the censorship is aimed solely at those on the left, sadly missing the point that it is their anti-establishment stance that put a target on their backs.

She is spot on about one thing though, and that is the claim that Facebook is tearing apart the country. In fact, there is an entire documentary devoted to showing exactly how this is happening, called The Social Dilemma. If you have yet to watch it yet, we highly recommend doing so. TFTP discussed it in a recent podcast with the founders of Collective Evolution.

Unfortunately, in the movie, their only solutions to rolling back this impending civil war brought on by Facebook and the like selectively censoring information, is using the government. This cannot and will not ever work.

There are new models out there right now that show how obsolete Facebook and their giant platform of thought manipulation and censorship has become. It is up to us to vote with our use of social media to create real change.

Do we want to continue to allow Facebook to treat us as a product while making billions off censoring peaceful anti-establishment voices, potentially kicking off a massive civil war in the process? Or, do you want to do something as simple as using the new model, one that doesn’t steal your information and peddle it to the highest bidder?

Over the past couple of years, we have been helping to build this new model and with your help, it can replace the tyrannical old one.