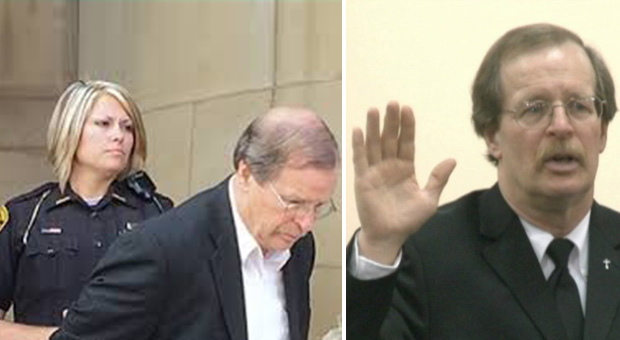 Democrat politician tied to D.C. pedophilia network admits multiple counts of raping children
A former Ohio Mayor, with ties to the Elite Washington D.C. pedophile ring, has pleaded guilty in court to multiple counts of child sex crimes, including raping a child as young 4 years old, as President Trump’s vow to take down Pedogate steps up another greasy rung of the political ladder.

Democrat, Richard Keenan, confessed to dozens of sexual crimes including charges of rape, attempted rape, and gross sexual imposition and agreed to a sentence of life in prison.

According to court records, when Keenan was arrested, he claimed that the 4-year-old girl “initiated it”, telling police, “she came on to me“.

According to Fox59, court documents revealed that the victim told Keenan’s wife about the sexual abuse that began when she was 4-years-old and lasted for three years.

When Keenan’s wife confronted him about the allegations, he responded, “I did it.”

Keenan also confessed to the allegations to his pastor, a social worker and his brother and sister-in-law, according to documents filed by the assistant prosecutor.

Keenan admitted himself into a psychiatric facility after the admissions because he said he was feeling suicidal.

Filings obtained by the Youngstown Vindicator go into extensive detail about his purported admissions during group discussions at the psychiatric ward.

He allegedly said he blamed the victim for initiating the acts and said she was a “willing participant.”

WKRN reports: He was visibly shaken Friday as he changed his plea to guilty on 20 counts of sex crimes, including eight counts of rape.

Keenan agreed to a life sentence with the eligibility of parole after ten years.

According to court documents, the abuse began as early as September 2013 when the victim — who Keenan knew — was just 4 years old.

“It gives the victim some closure. Obviously, keeps this young child from having to testify and I think it’s a good result given all the facts and circumstances,” said Assistant Prosecutor Gabe Wildman.

He said prosecutors have a responsibility to do what’s best for the victim and that they accomplished that Friday.

“Not bringing her in here to have to testify in the small courtroom with this man in there as well.”

Keenan’s family was emotional. They lashed out at reporters after the hearing and tried to block him from the camera’s view.

Prosecutors said this just goes to show how difficult these cases are for everyone.

This case was a victory for Congressman Trey Gowdy who has been working hard for restitution for victims of pedophilia and child sex trafficking after he told Congress that “no child victim should have to stand in court and face their rapist.”

In an emotionally charged speech, Gowdy told a room full of prosecutors that he vowed to take down the Elite pedophile ring that is infesting Washington D.C. and the rest of the nation, adding that if anyone stands in the way of the child sex cases, then he wants a list of those people’s names so he can force them to publicly explain themselves for their actions.

Since Donald Trump was sworn in as president and promised the American people that he would destroy the child trafficking networks in the United States, hundreds have been arrested nationwide in a string of operations carried out by federal law enforcers.

The conviction of Keenan is a real victory in the destruction of Pedogate, with officials now claiming that the first high-ranking Democrat to plead guilty in court, with connections to the D.C. pedophile ring, will “sing like a bird” in the hope of having his life sentence reduced.